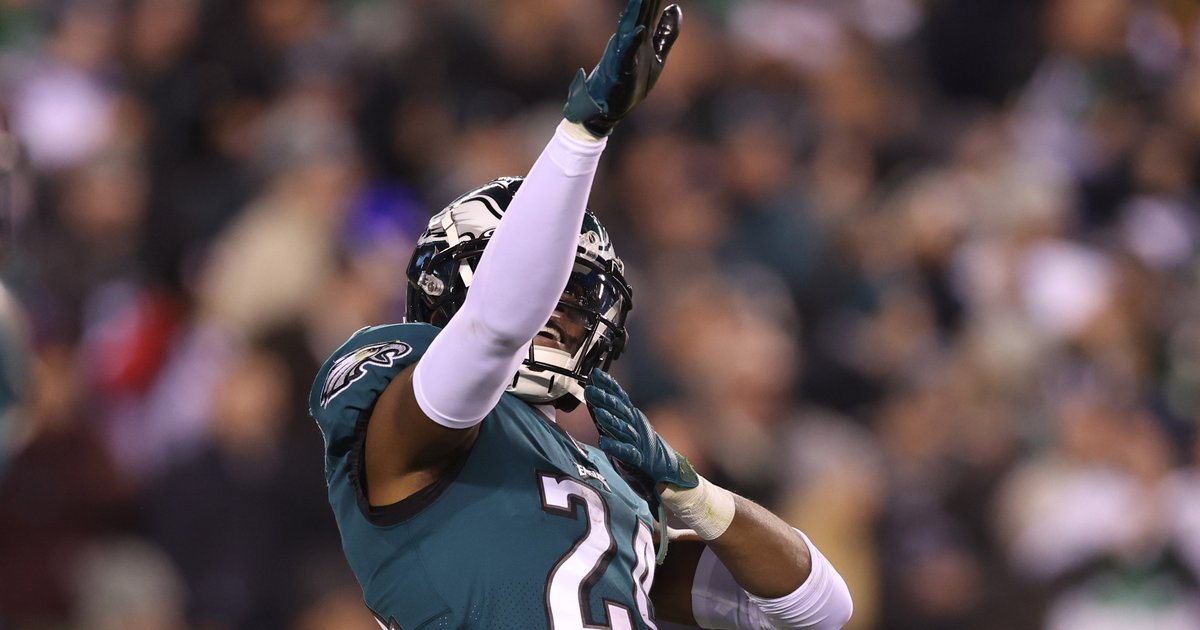 The Giants had their reasons to cut James Bradberry way back in May, but they lived to regret it Saturday night.

After falling into a 14-0 hole, New York needed to get something going and may have even had it after Daniel Jones scrambled to evade pressure then hit Matt Breida in the open field for 19 yards to begin a new series.

It could’ve been the start of a momentum shift, but then Bradberry saw something he recognized.

On the next play, Darius Slayton ran a quick route underneath and Jones had his eyes locked in on him. Bradberry read it the entire way. He jumped the route as the pass was leaving Jones’ hand. There was nothing the Giants could do.

Interception. Eagles’ ball. And with 34 seconds still remaining in the first quarter, only the beginning of New York’s problems in what became a 38-7 thrashing in the NFC divisional round and a nonstop party for Philadelphia down at Lincoln Financial Field.

“Of course, I’ve been studying film,” Bradberry said postgame. “I kinda saw a play I recognized. Noticed it was a quick in, so I just jumped the route.”

And grabbed the highlight of what was a lockdown performance in the biggest game of his career so far, against the team that wanted to move on from him no less.

“It was a really good feeling,” the veteran cornerback said of his pick. “Probably say top five of my career right now.”

Via Pro Football Focus, the Giants’ offense targeted Bradberry four times Saturday night, and alongside his pick, he forced two incompletions and allowed a single catch for just three yards.

One of those incompletions came early into the third quarter with the Eagles comfortably up 28-0. Looking for any sort of spark, Jones lobbed a deep pass down the left sideline to a streaking Slayton, but Bradberry stuck to him like glue and kept the ball away to force a third down on an eventual three-and-out.

He wasn’t going to give them anything and neither was the rest of the Eagles’ secondary, who allowed only 109 passing yards in total for the night.

So as a surprise playoff appearance for the Giants came to a crushing end, did they make a mistake releasing Bradberry?

“I wouldn’t necessarily call it a mistake,” he explained afterward. “Of course, I didn’t like the decision, but I don’t know all they had to process on their end. I know there was a cap issue. So I can’t really say it was a mistake. They made it to the playoffs and people didn’t think they were going to make it to the playoffs, so they did a good job. The defense and whatnot, everybody stepping up and kind of making up for what I left.”

Teammate and Pro Bowler Darius Slay wasn’t nearly as diplomatic about it:

Bradberry signed a three-year deal with the Giants ahead of the 2020 season and was a productive DB for them across his two years in East Rutherford, but it was just the wrong place at the wrong time. The team was stuck in football purgatory at the bottom of the NFC East under former general manager Dave Gettleman, and when current GM Joe Schoen took over after 2021, he wanted Bradberry’s high cap hit off the books but failed to find a trade partner, ultimately making the call to cut him.

You can say it worked out for the Giants. Under first-year coach Brian Daboll, they turned things around quickly and made an unexpected run to the playoffs within a highly competitive division, and even pulled off a Wild Card weekend upset over the NFC North champion Vikings.

But it worked out even greater for Bradberry and the Eagles, who agreed on a one-year deal right after his release. They assembled one of the top defensive backfields in football between him, Slay, and C.J. Gardner Johnson, which helped push the Eagles to the NFC East title and the conference’s No. 1 seed, then on Saturday night, locked down the upstart Giants to advance to the NFC Championship game next Sunday.

The 29-year-old Bradberry, in his seventh season, has never made it this far, so he’s enjoying the ride with every mile and wants to see it through to the end.

“Never been, great feeling,” he said of playing in the NFC title game. “Something new to me and I definitely want to keep it going.”

Eagles will host 49ers in NFC Championship Game
Ranking the NFL TV broadcast intro theme songs
What you missed from Sixers vs. Kings: a furious comeback without their two stars
Eagles thrash the Giants, 38-7, just like the Vikings five years ago
Read Previous