What they’re saying about the Eagles: So much for Minshew Mania 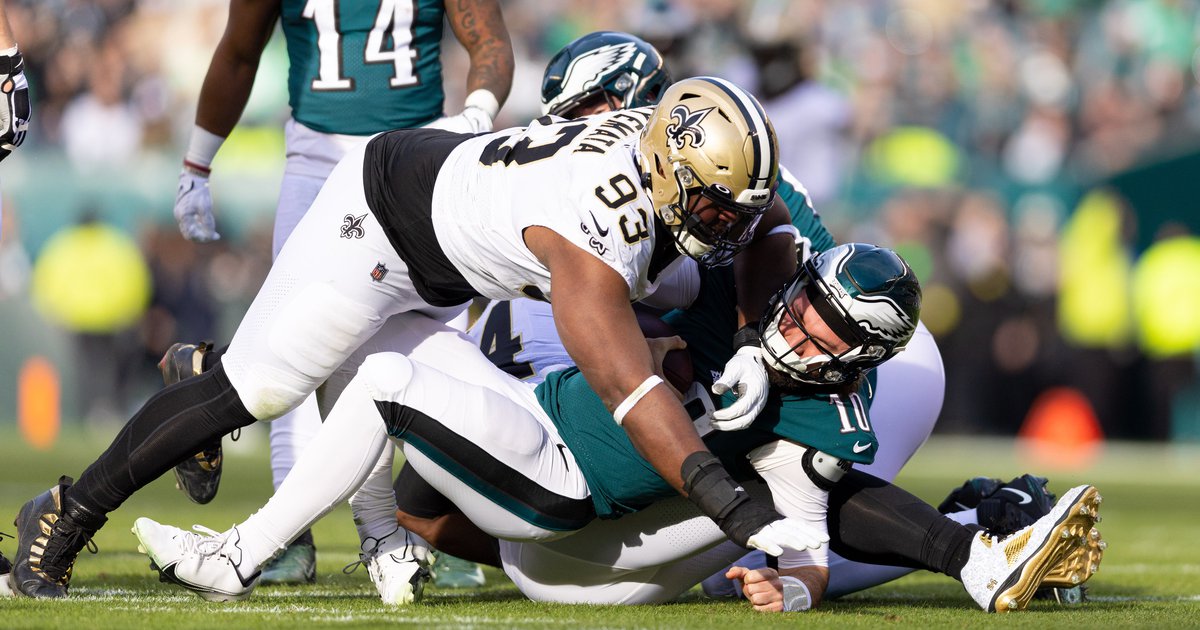 For the first time all season, the Eagles are left scrambling for answers.

They went into Lincoln Financial Field Sunday against the Saints, with another chance to clinch the NFC East and the No. 1 seed in the playoffs, and just fell completely flat.

The offense struggled to move the ball, the defense got picked apart underneath and couldn’t get off the field, and the home crowd booed…a lot.

The Eagles, who have had so much go right for them all season, may have just hit a wall. They’ve lost back-to-back games for the first time all year and suddenly have just a week left to figure things out and actually secure home-field advantage and a first-round bye in the postseason.

The urgency, and the frustration, weren’t lost on anyone postgame.

“Guys just gotta come together,” said star receiver A.J. Brown, whose 78-yard touchdown catch was one of the Eagles’ few signs of like on Sunday. “Guys gotta see what they really wanna do. This s*** should be over.”

The Eagles still have work to do and have just the regular-season finale against the Giants next Sunday to get it done.

It’s an odd position to be this concerned about a 13-3 football team, but here we are.

Here’s what they’re saying about the Eagles…

Losses happen, but it’s how this one happened that’s so frustrating.

The Eagles have been a juggernaut all season and, on paper, had the personnel to beat a struggling Saints team even with Jalen Hurts out for another week due to injury.

Then kickoff arrived and they were just a mess.

The most concerning thing to me wasn’t the loss as much as the fact that right from the start of the game the Saints were the more prepared team, the more intense team, the more physical team. Not the better team, but it didn’t matter. They played like they were the ones chasing a No. 1 seed, and the Eagles played like a 6-9 team desperate to make the playoffs. This is a Saints team that was 2-5 on the road, and they were the aggressor on offense and defense. Late in the second quarter, the Saints had outgained the Eagles 252-21, they led 13-0, Andy Dalton still hadn’t thrown an incomplete pass and the Eagles didn’t have any first downs. What the hell is that? You can’t talk like you’re a Super Bowl contender and then let a 6-9 team come into your building and jump you like that. Yeah, injuries, I get that. But we’re talking effort here, and the Eagles didn’t have it in the first half, and that’s squarely on Nick Sirianni and his coaching staff. Unacceptable. Inexcusable. Sure, they woke up in the second half and started to make some plays and made it close for a while. Who cares. It’s a 60-minute game and if you don’t bother to bring it for half of those 60 minutes, you’re not going to win many games. This team is damn lucky it has one more chance to lock up No. 1 seed, and obviously they’re a different team with Jalen Hurts behind center. But I don’t care who the quarterback is. If they come out and play like this again, they’re not beating anybody. (NBCSP)

I also wanted to note his final observation in regard to cornerbacks Darius Slay and James Bradberry, who neither of which have really been the same since safety C.J. Gardner-Johnson went down with a lacerated kidney:

First half of the season, it was hard to imagine better cornerback play than the Eagles were getting from Darius Slay and James Bradberry. Eight games in, they were the only corners in the league holding opposing quarterbacks to a passer rating below 50 when targeting them – Slay was at 37.2 and Bradberry 35.9. They each had three interceptions and a combined 18 pass knockdowns. Last eight games they have no interceptions and 10 knockdowns. Slay hasn’t looked the same in a while. QBs have a 134.2 passer rating targeting him since Week 9 going into Sunday, and Bradberry had dropped off to 69.7 – still good but not where he was. And Sunday, once again they just didn’t make an impact. Dalton had his way – 18-for-22? – against the Eagles’ secondary, and Bradberry give up a 58-yarder to Rashid Shaheed. The Eagles are going to face some elite QBs in the playoffs, and Slay and Bradberry have to be better. (NBCSP)

So much for Minshew Mania

Philadelphia has an odd and distinctly unique history of backup quarterbacks stepping up as unsung heroes.

Unfortunately, Gardner Minshew won’t be the newest addition to it.

While he did an alright job against the Cowboys, Minshew was brutal against the Saints. He struggled with accuracy, wasn’t making reads, and held on to the ball for way too long.

If Sunday proved anything, it’s two things: 1) Jalen Hurts is absolutely not a system quarterback. 2) The Eagles can’t get Hurts back soon enough.

Wrote Rodger Sherman in his Week 17 winner and losers:

An entire dimension of Philadelphia’s offense is missing when Minshew plays. Hurts averages more than 50 yards per game as a runner; Minshew had one carry for zero yards on Sunday—a quarterback sneak where the Eagles failed to pick up a first down, something that almost never happened when Hurts’s powerful legs were churning. Not having Hurts as an option in the run game also makes life harder for the Eagles running backs; the team ended the game with a season-low 67 rushing yards.

The Eagles were 13-1 with Hurts; they’re 0-2 with Minshew. They needed only one win (or one Cowboys loss) in their final three games to clinch the NFC East and a first-round bye; now they’ll enter Week 18 needing to play their starters against the Giants. The Eagles could also miss out on the no. 1 seed, which would buy a critical week for Hurts as he recovers from his injury. (The Ringer)

Sit down, be humble

Players, coaches, and fans alike were all left frustrated with Sunday’s loss. It was a harsh reality check for the Eagles late in the season and with some big advantages on the line.

But maybe it’s a good thing that it happened.

In the bigger picture, and perhaps someday in retrospect, maybe the Eagles needed a relative comeuppance. The Hurts injury was unfortunate, but Sirianni and Steichen may have flown too close to the sun by having the quarterback run as often as he did on the frozen tundra at Soldier Field.

Sirianni’s “How ‘bout them Eagles!” boast following the win over the Cowboys in October and his over-exuberance in Indianapolis after the comeback win over the Colts, following the firing of his mentor Frank Reich, may suggest that he does, in fact, get “too high” after wins.

He’s an emotional coach. He’s a confident individual. But he can’t coach with emotion. And he can’t allow for his players to get overconfident when they’ve accomplished so little thus far. (The Inquirer)

Will the Giants hold back?

The Giants are going into Week 18 with a playoff spot and their positioning within it locked up, so they have nothing to play for while the Eagles, banged up and out of sorts, very much do.

Who had that on their NFL bingo card?

Anyway, does that mean Giants head coach Brian Daboll will keep his team’s risk to a minimum and rest his starters, in turn making things easier for the Eagles?

He isn’t showing his hand yet, but that would be the sound decision.

So, the Eagles should expect to see a lot of the Giants’ backups, especially quarterback Tyrod Taylor and running back Matt Breida. The truth is, the Giants left Jones in the game too long on Sunday. With a 31-10 lead early in the fourth quarter and the playoff spot virtually locked up, Jones scored on a 10-yard run, taking a big hit as he went into the end zone. That could have been disastrous.

“He’s probably, not probably – he’s the toughest quarterback in the NFL,” Barkley said. “I really do believe that. … He’ll try to run somebody over. He doesn’t care. He’s a competitor. He’ll do whatever it takes to win a football game. That’s the thing that I love most about him.”

If the Giants want testimony on how one play can torpedo playoff hopes, they can look across the field at the guy who just took his arm out of a sling and now has to rescue his team. (NJ.com)

Something a bit more positive to cap things off.

Now that the regular season is winding down, ballots are being cast, and talk over end-of-year awards is going to grow more frequent.

The All-Pro team is one of those honors, and for Bill Barnwell over at ESPN.com, he has four Eagles on his first-team roster – A.J. Brown, Jason Kelce, Lane Johnson, and James Bradberry.

At the end of the day, it does speak to how good the Eagles have been this season, but moreover, just how important Kelce and Johnson are to the whole operation.

Even having seen that Jefferson catch against the Bills, I’m not sure there’s any wide receiver I’d want catching the ball in a one-on-one situation more than Brown, whose numbers would be more impressive if the Eagles hadn’t spent so many fourth quarters running out the clock. (ESPN.com)

While Johnson sat on Sunday and is expected to miss Week 18 after suffering an abdominal ailment, he was simply playing at a level above anybody else in the league before going down injured. Johnson was dominating on the ground and hasn’t allowed a sack for the second consecutive campaign. Eagles quarterbacks have a decade-long track record of playing significantly worse without Johnson in the lineup, and the offense collapsed for the first time all season without Johnson in Sunday’s loss to the Saints. (ESPN.com)

There’s just nobody in the league like Kelce, whose physical traits as a puller continue to make the veteran lineman an essential part of Philadelphia’s rushing attack. The 35-year-old has missed just 28 offensive snaps all season, with those coming when games have been out of hand. About the only issue you can take is that he has committed seven penalties, up from one a year ago. He’s still the best center in football. (ESPN.com)

Bradberry has formed one of the league’s best duos alongside fellow veteran Darius Slay, but he has seen more targets and won more often than his teammate. Opposing quarterbacks throwing in Bradberry’s direction have posted minus-32.5 EPA per NFL Next Gen Stats, the best mark for any corner. Bradberry has allowed a league-best 9.4 receptions below expectation and only 4.3 yards per attempt. Not bad for a guy who nobody in the league wanted to trade for as a salary dump this spring. (ESPN.com)