The Eagles have problems and the Saints made them glaring 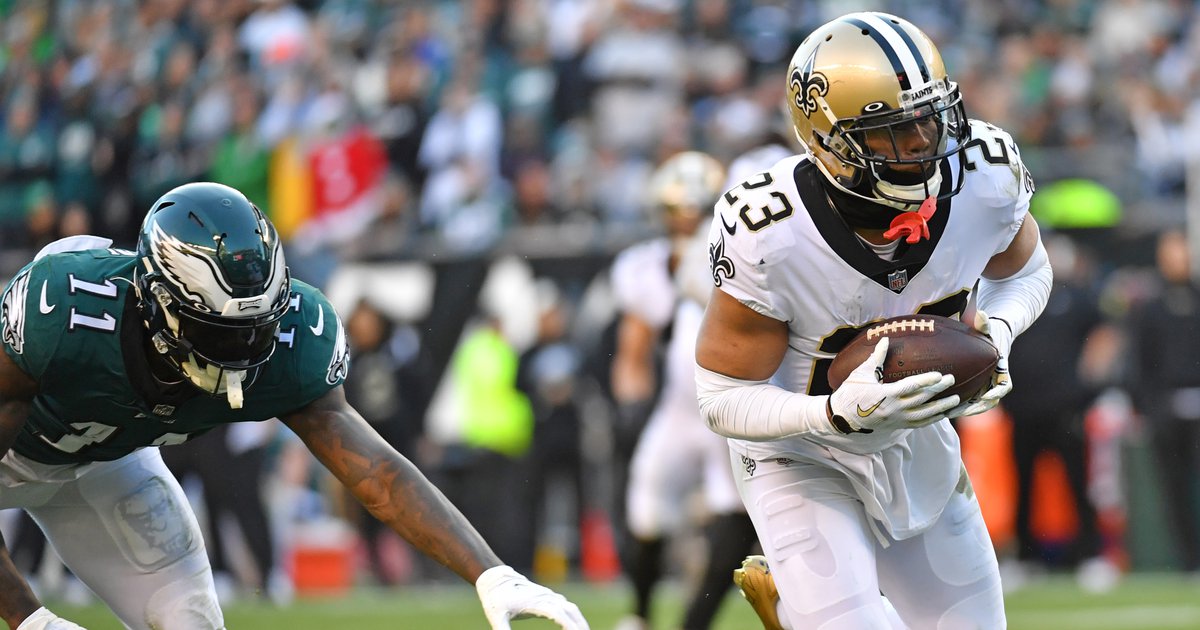 If there’s any moment that sums up where the Eagles are at right now – though there were a lot to choose from on Sunday – it was on 4th and 1 at the 50 with 8:35 left in the fourth quarter.

They ran the QB sneak, and the one play that’s been near automatic all season went nowhere. Turnover on downs.

The Eagles, who struggled to get much of anything going all day, lost to the Saints, 20-10.

The NFC East and the conference’s top seed are still up for grabs but with the lead over Dallas suddenly that much slimmer. The extra salt in the wound: Their first-round pick by way of New Orleans also slides further back with the Saints now 7-9 and in the playoff picture.

The immediate goal is the same, but still outstanding: Win and home-field advantage and a first-round bye in the postseason are all Philly’s, and the Eagles really need it now more than ever.

But the concern that they can actually get it done, which would have been unfathomable two weeks ago? Well, it’s definitely enough to make you sweat a bit, as weird as that sounds over a 13-3 team.

The Eagles have issues, and in truth, they have all season (no team’s ever without them). The problem now is that they’re not finding ways to overcome them, to win in other ways as they have in 13 games prior.

They’re more banged up than they’ve been all season, and even worse, are showing signs of stalling out at the worst possible time.

Gardner Minshew did admirably last week against the Cowboys but struggled to get the ball moving against the Saints on Sunday. He threw for 274 yards and a touchdown on 18/32 passing but struggled with accuracy and gave up a pick-six to Marshon Lattimore late that all but put the game out of reach.

And without the threat of the QB taking off at any time or extending the play like Hurts can, Shane Steichen’s offense has looked way more one-dimensional, and for the better part of Sunday, incredibly stagnant.

By the time the Eagles had finally registered a first down, there were only 11 seconds left in the first half.

The past two weeks did prove that Hurts definitely isn’t a system quarterback and is every bit the MVP candidate he’s shown himself to be before his shoulder sprain. But that is an extremely hollow victory right now.

“We just couldn’t get rolling,” Minshew said. “It’s one of those things where you try to get that first 1st down and we kept just shooting ourselves in the foot and getting in our own way.”

Jack Driscoll’s a pro and is ready to do whatever the coaching staff asks of him, but there was no way he would make up for an All-Pro caliber tackle that hasn’t been responsible for a sack allowed in well over a year. The right side was collapsing in quicker on Minshew and the Saints sacked him six times total on Sunday, with Cam Jordan collecting three alone.

They miss Avonte Maddox bad, and C.J. Gardner-Johnson too, but the problems in the Eagles’ secondary go beyond a couple of injuries at this point. They’re getting picked apart underneath. Jonathan Gannon’s passive game-planning isn’t surrendering any big plays (most of the time), but when opponents can bring a steady and patient rushing attack like the Saints did – Alvin Kamara led with 74 yards and Taysom Hill ran for 46 – Andy Dalton, and Hill too, were able to dictate the tempo, keep the Eagles’ defense on the field, and waste tons of minutes (New Orleans won the time of possession battle a staggering 37:04-22:56).

“We had chances to win,” Minshew said. “Didn’t make ’em. Didn’t take ’em when we had ’em. So that’s another one we’ll have to go figure out.”

The pass rush, it’s getting to the quarterback still. Edge rushers Haason Reddick (16) and Brandon Graham (11) each had two sacks to set career highs while the Eagles’ defensive front recorded seven as a whole, but the team may have just lost its best kept secret in Josh Sweat for a while because of a neck injury that left him down and required to be stretchered off. (The good news though is that he has movement in his extremities after being taken to a local hospital and is expected to be released Sunday night.)

The Eagles have problems and they can’t be ignored after Sunday. They still control their own destiny, but have lost back-to-back games for the first time all season and are bringing it down to the wire.

Their playoff spot is locked in, they’re going either way. But whether they’ll have an extra week to rest up and heal, iron out the kinks, and have a guarantee that the road to the Super Bowl runs through Philadelphia, that all comes down to what they do against the Giants next week at home.

“I’m not ever gonna be somebody that hits a panic button,” head coach Nick Sirianni said. “We’re gonna double down on the things we think are true and we’re gonna get better from this. That’s all we can do.

“We gotta own what we put out there and get better from it.”