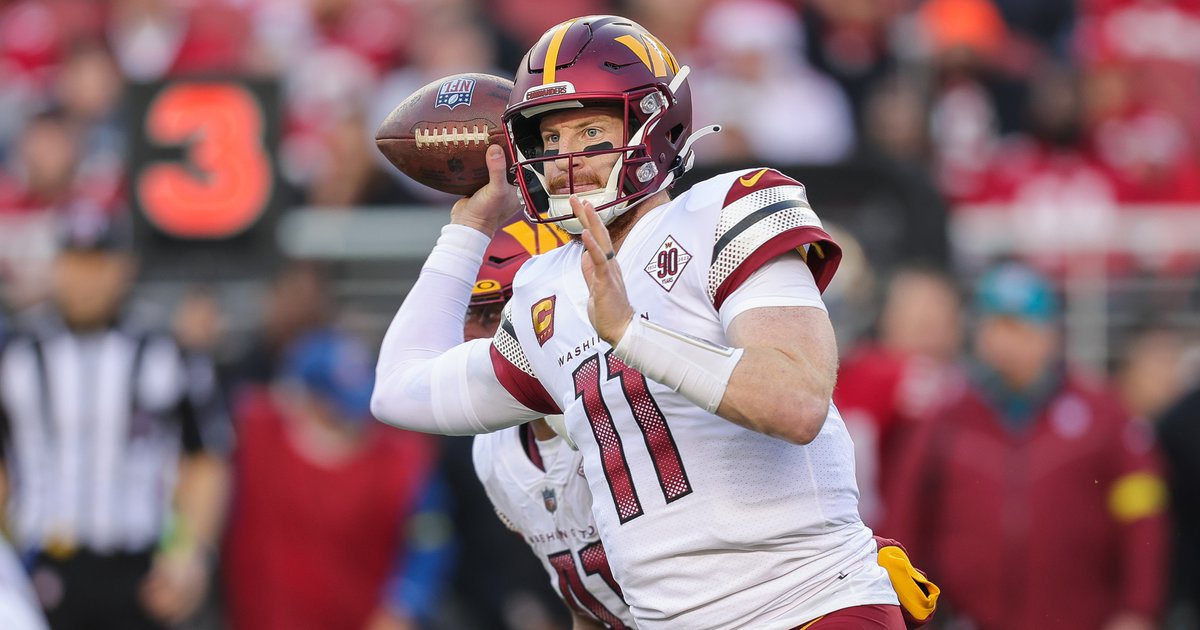 The Commanders are going back to Carson Wentz.

With Washington’s offense in need of a jumpstart and a playoff spot on the line, head coach Ron Rivera announced Wednesday morning that Wentz will be the starting quarterback on Sunday against Cleveland.

Wentz was the Commanders’ starter to begin the season, but a 2-4 start and a broken finger suffered during a slog of a win over the Bears in October made way for Taylor Heinicke, who Washington caught fire under.

Through the remainder of October and into November, the Commanders won five of six games, which included a rare defeat of the Eagles and a near upset of the NFC North-winning Vikings, to climb into the playoff picture.

But then the calendar turned to December and Washington hit a wall, going 0-2-1 in the three games since.

In Saturday’s 37-20 loss to San Francisco, Rivera had seen enough and pulled Heinicke for Wentz in the fourth quarter. The former Eagles QB went on to throw for 123 yards and a touchdown on 12-16 passing, though keep in mind it was garbage time by that point.

It’s been a rough go for Wentz ever since his and Doug Pederson’s era of Eagles football collapsed in the 2020 season.

He was dealt to an Indianapolis team looking for a quick fix at quarterback that offseason, but the Colts fell apart down the stretch and owner Jim Irsay lost his patience quick, trading him to the Commanders, who were also in search of an on-the-fly QB upgrade, soon after.

Then Washington struggled and he lost his job to the hot hand to continue a career downturn.

But with two games left and a chance at a playoff spot – Washington currently holds the third Wild Card spot at 7-7-1 – this could be a chance for the once franchise QB to start turning the tide back in his favor.

Speaking of the playoffs, here’s the current picture with the NFC East teams highlighted in bold:

And here are the Week 17 clinching scenarios:

• You probably know it well by now, but for the Eagles, it’s simple: There playoff spot is locked up. Now they just need one more win in the next two weeks to clinch the NFC East and the conference’s top seed in the postseason, which will grant them home-field advantage and an increasingly precious first-round bye.

• Dallas has a faint chance of catching the Eagles for the division, but they need to win out and Philly to lose out for that to happen. The chances at the No. 1 seed are even slimmer with the 49ers and Vikings needing to lose out as well. Right now, the No. 5 seed is most likely what they’re looking at.

• It’s win-and-in for the Giants, which means Sunday’s home against the Colts will be one of the biggest the Meadowlands has seen in a long time. New York evened out down the stretch after a surprising 7-2 start, but their odds are still looking good, especially this week against a Colts squad flailing for any sort of spark at 4-10-1. FiveThirtyEight’s projections have the Giants with a 91 percent chance of making the playoffs.

• The Commanders need help if they’re going to lock up a spot this week, which if the Giants win also, would mean the entire division is playoff-bound. Washington needs a win, losses from Seattle (7-8) and Detroit (7-8) right behind them, and a loss or tie from a Packers team (7-8) only just hanging on.

Apparently, Diggs did not want to hear about it.

Interpret that how you will.

Diggs was undoubtedly a revelation last season with a staggering 11 interceptions, but offenses started picking up on his tendency to allow tons of space in the hopes of closing in on the ball at the last second.

That worked last year. It hasn’t worked nearly as well this year.

Through 15 games, Diggs has just three picks and hasn’t caught one since Oct. 23 against Detroit.

And when it comes to matchups against elite receivers like Brown, yeah, he gets burned with that approach.