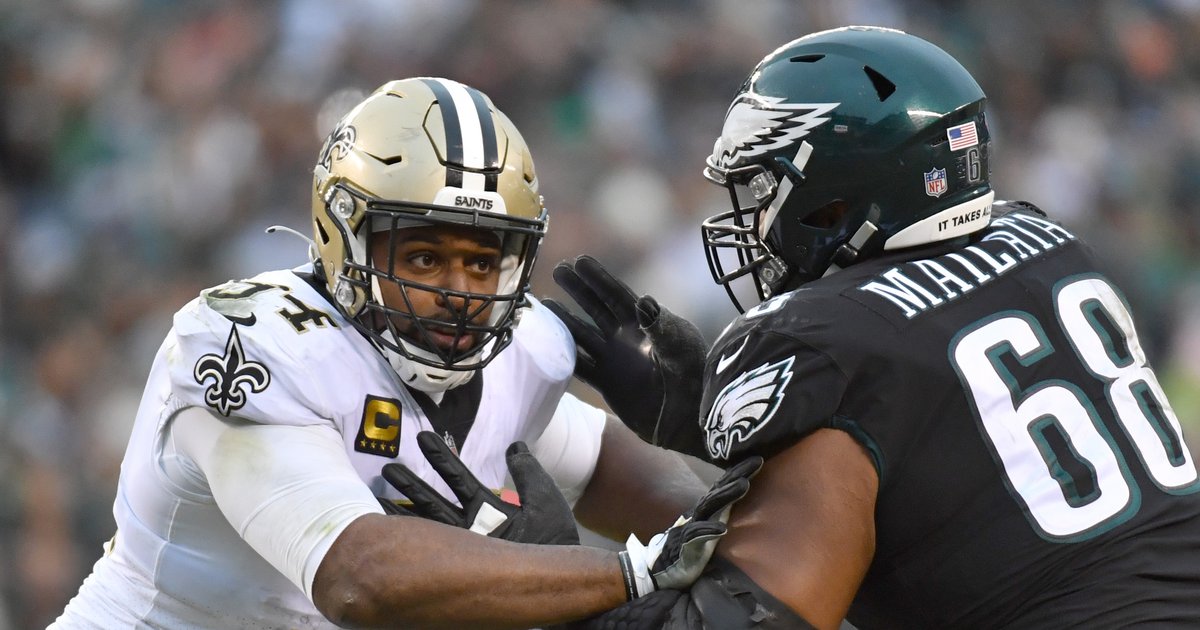 After their road loss to the Dallas Cowboys on Christmas Eve, the Philadelphia Eagles will look to get back in the win column against the New Orleans Saints, thus clinching the NFC East as well as the 1-seed in the NFC playoffs. As an added bonus, they can deal a loss to the team whose first-round pick they own in the 2023 NFL Draft. Here are our five matchups to watch.

1) The Eagles’ run defense vs. Taysom Hill and Alvin Kamara

The Saints’ passing offense is depleted, to say the least, with several wide receivers out, and Andy Dalton at quarterback. We’ll get to that momentarily. Their offense has been at its best this year when they have gotten Taysom Hill going. It’s probably not a stretch to say that Hill is their best offensive skill player, if rookie WR Chris Olave can’t play.

Hill can run through tacklers:

And when the Saints use him at quarterback, he has the ability to beat you over the top if you can a little too over-aggressive in stopping the run.

“He plays a lot of positions,” Jonathan Gannon said. “We were just talking about it. He plays quarterback, tight end, receiver, running back. He does it all. When he’s playing certain spots, we have to know that hey, this is what they like to do with him, this is why he’s a matchup issue for defenses if you allow it to be, and we have to have a good plan for him when they deploy him in different ways. It makes this offense hard to defend because of how they use certain players that they have at their disposal.”

It probably not the best sign for an offense if the No. 3 QB / No. 3 TE / No. 3 RB / No. 6 WR / core special teams guy is the best player, but that’s just sort of where the Saints’ offense is right now after a decade and a half of excellence under Drew Brees and Sean Payton.

And then there’s Alvin Kamara, who does not look like the same player he was earlier in his career. On the season, Kamara has 184 carries for 717 yards (3.9 YPC) and two TDs. He has also caught 55 passes for 480 yards (8.7 YPC) and two TDs. Over the last two games (both wins), Kamara has gotten 45 touches. They want to run it and let their defense win it.

2) The Eagles’ secondary vs. the Saints’ receivers

The Saints don’t have much at receiver these days, as several players are hurt:

• WR Michael Thomas: Thomas had 470 receptions for 5512 yards and 32 TDs over his first four NFL seasons, but injuries have derailed his career. Over the last three seasons, Thomas has 56 receptions for 609 yards and 3 TDs, and he has missed 39 games (and counting). He had toe surgery, and is done for the season.

• WR Jarvis Landry: Landry signed with the Saints in May to help with their wide receiver depth. He had one big game Week 1 against the Falcons (7-114-0), but was otherwise not much of a factor. On the season, he had 25 catches for 272 yards and 1 TD in 9 games before landing on injured reserve with an ankle injury.

• WR Deonte Harty: Harty is one of the NFL’s best return men, and a playmaker on offense. He suffered a likely season-ending toe injury earlier his season.

Those three guys will be out. And then there’s Chris Olave, who missed the Saints’ Week 16 matchup against the Browns with a hamstring injury. He leads the Saints with 63 catches for 940 yards (14.9 YPC) and 3 TDs.

Olave has a slight build, but he is an excellent route runner, he makes difficult catches look easy, and he is a threat both in the intermediate and deep areas of the field. He won’t remind anyone of Deebo Samuel or A.J. Brown in the run after catch department. This is the exact type of receiver that Darius Slay is built to cover. In recent weeks, Slay has not been the dominant cover corner that he was earlier this season.

We’ll see if Olave can play soon enough. If not, the Saints’ remaining receivers look like so:

Their best red zone threat is TE Juwan Johnson, who has seven TD receptions this season. If you’re a Penn State fan, you may remember that he played receiver there for four years before transferring to Oregon.

There are things to note at three of their positions:

• Left tackle: The Saints’ offensive line took a hit this offseason when they lost Terron Armstead in free agency to the Miami Dolphins. They then selected Trevor Penning out of Northern Iowa with the 19th overall pick in the 2022 NFL Draft. During the preseason, Penning suffered a torn ligament in his foot, and he missed the first 11 weeks of the regular season. He has appeared in four games since, mainly as a sixth offensive lineman. The Saints’ starting LT this season has been James Hurst, who is a nine-year vet with a lot of experience, but nowhere near the ability of Armstead.

• Left guard: Starting LG Andrus Peat was carted off the field with an ankle injury during the Saints’ Week 16 win over the Browns, and did not return. Former Eagle Josh Andrews (going way back to the Chip years), a practice squad callup, filled in. To be determined whether a banged-up Peat will start at LG, or if it will be Andrews (or someone else).

• Right guard: The original starting RG was Cesar Ruiz, who started the first 14 games this season, but was placed on injured reserve with a foot injury. Throckmorton has filled in and has been a liability.

Those are the three areas where the Saints are most vulnerable. We should also note that the Saints show an abnormal number of 6-OL sets. For example, Penning played 24 snaps Week 15 against the Falcons, and 20 snaps Week 16 against the Browns. Expect to hear “Number 70 reported as eligible” quite a bit on Sunday.

If Brandon Graham can notch one more sack, the Eagles will be the first team in NFL history to have four players with at least 10 sacks.

4) The Eagles’ receivers vs. the Saints’ cornerbacks

As usual, the Eagles should have some matchup advantages with their two stud receivers vs. the opposing team’s cornerbacks. The Saints’ best cornerback is Marshon Lattimore, who last played in Week 5 against the Seahawks, when he suffered an abdominal injury. Oddly, the Saints never placed Lattimore on injured reserve, but he has missed their last 10 games.

The Saints’ top three remaining corners are Paulson Adebo, rookie Alontae Taylor, and Bradley Roby. According to pro-football-reference.com, opposing offenses have completed 45 of 67 passes for 561 yards (8.4 YPC), 5fiveTDs, and 0 INTs vs. Adebo, for a passer rating of 117.8.

5) Cameron Jordan vs. Jack Driscoll (or whoever fills in at RT for Lane Johnson)

With Lane Johnson sidelined for the foreseeable future with an abdominal injury, Jeff Stoutland and the Eagles will have to adjust their offensive line to account for his loss. Does that mean that Jack Driscoll will simply fill in at RT as Johnson’s replacement? Or will Andre Dillard start at LT with Jordan Mailata flipping over to the right side? There is logic to both scenarios.

Saints DE Cameron Jordan typically lines up across from the right tackle. From 2017 to 2021, Jordan had 60.5 sacks, or just over 12 per season, however, he has had a down year in 2022, with just 5.5 sacks. Both Dillard and Driscoll are athletic linemen who can struggle with power. Because Jordan is a power rusher, perhaps it makes sense to park Mailata at RT, and allow Dillard to start at LT?