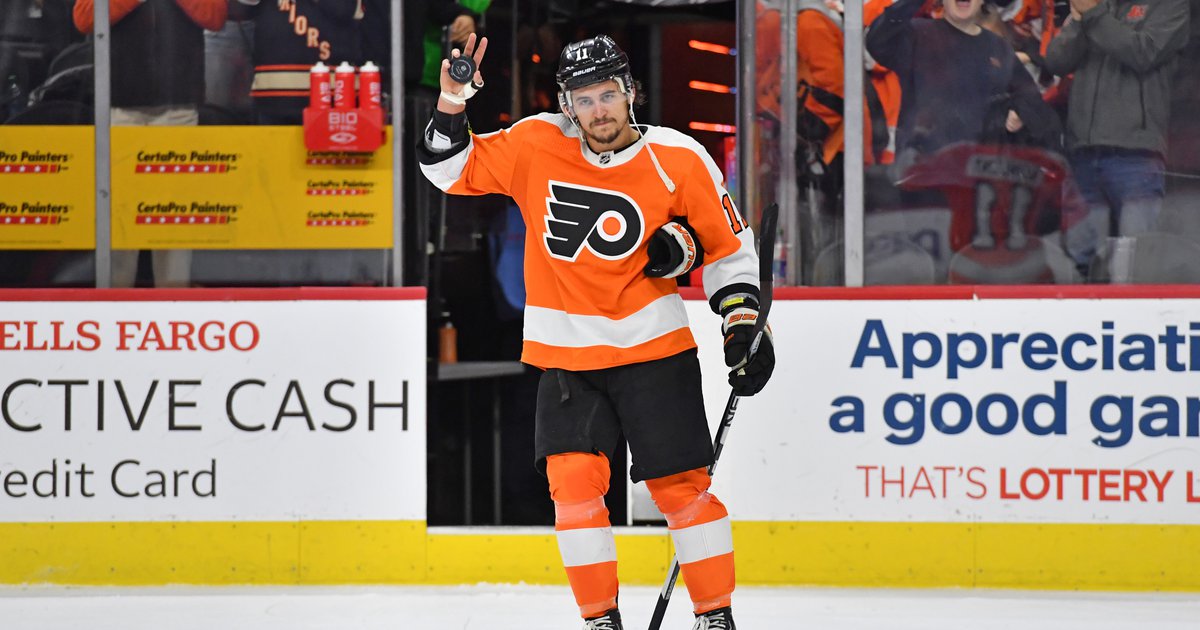 The Flyers were on the penalty kill and John Tortorella looked Travis Konecny’s way.

The puck bounced to Scott Laughton’s feet and he threw it up ice up for the clear. Konecny gave chase and won, streaking toward the net with Columbus’ Marcus Bjork the only defender in his way.

He made a quick shift to his forehand then slipped a shot under the glove of goaltender Daniil Tarasov for a shorthanded goal and a Flyers lead.

Later on in the third, providing insurance the Flyers would very much need in the end, Konecny collected the puck, deked a guy out of his skates, then capped it all off with a bullet of a backhander.

The Flyers held on to beat the Blue Jackets, 5-3, and Konecny was a huge reason why. He was all over the ice Tuesday night at the Wells Fargo Center and for once, in a year where it has so far shown little in the way of results, the team stuck to its process and won.

“That’s the effort we’re looking for,” Konecny said. “I thought it was good. We got a lead, we went down, we battled back, and then we closed it out. I thought it was a really good effort from everybody.”

The Flyers are still very much trying to figure themselves out right now in establishing a new identity. Head coach John Tortorella was adamant again postgame that the team is still in the early stages of “building,” reinforcing his stance from a few weeks ago that to bring the organization back to relevance, it’s going to take time. Time and a whole lot of pain.

Part of that process, he said at the beginning of the month, is deciding which players should be in it for the long haul. The jury on all that is still a ways out, though there are arguments to be had up and down the entire roster.

But what seems to be for sure is that Konecny will definitely be part of the long-term picture, whatever that may be.

His two goals Tuesday night brought him to 14 on the year and 28 points through 27 games to put him over a point-per-game pace.

It’s absolutely a bounceback year from last season, when nothing went right for anyone in the lineup, but more promising is the added responsibility the 25-year-old has been taking on.

He’s playing in any and all situations, taking steady time on the penalty kill for the first time in his career, and has so far answered every call from a coaching staff looking to develop more complete and mindful players.

There’s trust there, not just that Konecny will do the right things, but that he’ll find a way to make something happen.

“I’m always looking for him,” Tortorella said. “He does some crazy stuff at times, we need to work on situational play with him, but you gotta be really careful of how. He’s just a reaction-type player. You gotta be really careful how you coach him because I need to let him go. Teach him a couple things along the way, but I need to let him go because that’s when he’s at his best.”

“It’s been nice,” Konecny said in the locker room after. “Honestly, I feel like it helps me get engaged in games. I just feel the PK is one of those things where you gotta get your feet moving, you gotta be playing the right way in the right position, so it gets me engaged a lot of times.”

It’s sometimes hard to believe after seven seasons in the NHL but Konecny is still relatively young. As the 24th overall pick in the 2015 draft and a part of former GM Ron Hextall’s original unspoken rebuild of the team, Konecny was a pesky but highly productive winger in the mold of Boston’s Brad Marchand – “A little ball of hate,” as the NBC Sports draft analysts dubbed him back then.

When he cracked the Flyers’ roster in 2016, as a complimentary piece to a core of Claude Giroux, Jake Voracek, and Wayne Simmonds, he steadily trended upward in points and opportunity, being an absolute pain to the opposition while he was at it, and even earned his first All-Star nod in 2020 back when the team finally looked like it was on to something special.

But whatever magic they had got completely lost in the COVID bubble, and by then the Giroux-Voracek-Simmonds core was already fading (Simmonds was traded away at the 2019 deadline) before it completely fell off a cliff in the last two years.

Voracek was traded to Columbus last summer, Giroux got shipped out in March, and what was left was a group of either banged-up and expensive veterans or directionless youth still trying to fully find their footing in the aftermath.

Konecny was in the latter. The talent and the potential were still there, and so was the aggression, but by the end of last season, he was struggling to score in a campaign that was already well beyond lost. The Flyers as a whole were just a team that wanted the year over with so they could pick up the pieces.

They’re doing that now, slowly but surely, and Konecny looks like he’ll be a key part of the new puzzle once it’s done, whenever it’s done.

“When we get to being a team that is competing in big games, playoffs and all that, when we get there as a team, hopefully at that time, he’ll lead the way as far as situational play. He’s still a pretty young man in this game. I’m hoping he leads the way as far as understanding those things when you’re in those key types of situations.”