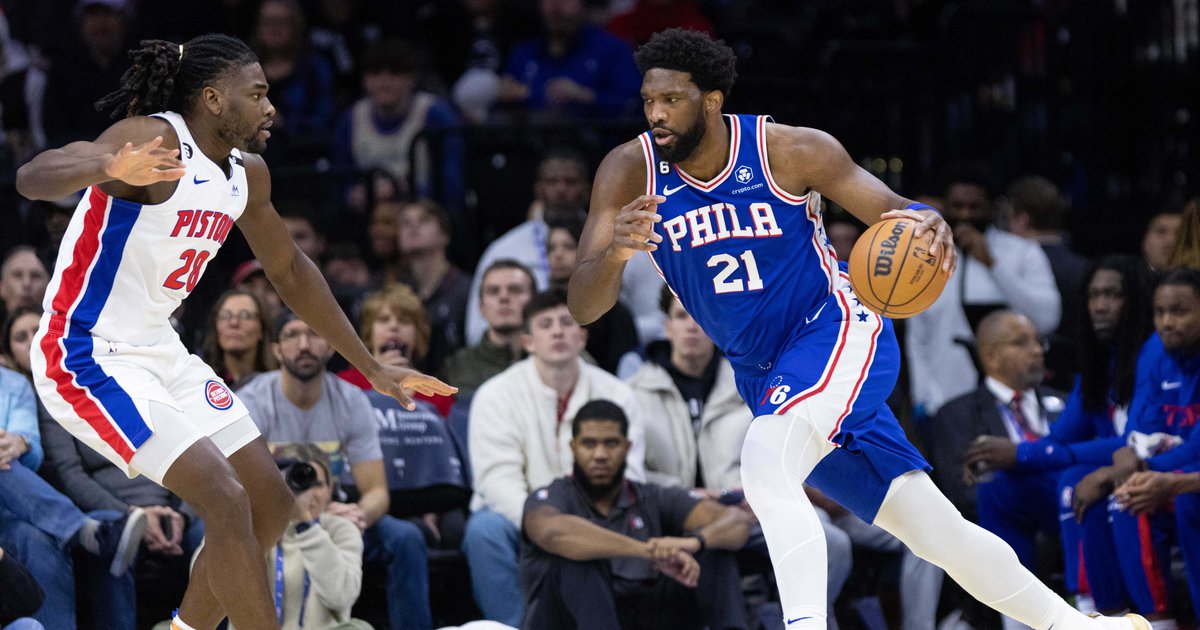 The Sixers shot poorly and didn’t get a single standout performance from their starters, but they coasted to a 113-93 win over a hapless Pistons team anyway.

• I think this is more of a demerit against the Pistons than an endorsement of Philadelphia’s play, but I’ve seen very few games that featured easier shot creation than this one. Detroit’s perimeter guys did not stay connected to their men basically the entire game, and the Sixers exploited that space all night long no matter who had the ball.

Detroit’s game plan against Joel Embiid was pretty clear to start the game — auto-double quickly on the catch and try to force somebody else to beat you. Save for a few possessions where he went into hero ball mode, Embiid rendered that strategy pointless in the opening quarter, firing passes around the perimeter that quickly led to wide-open threes for Philly. Embiid had four assists early on, so the Pistons were forced to adjust their approach.

Jalen Duren at least has hope and a prayer against Embiid in single coverage, but the rest of these dudes do and did not. Marvin Bagley III came in off of the bench and Embiid smelled blood in the water, immediately forcing Bagley to take a foul. Bagley was so physically overwhelmed by Embiid that it almost worked against the Sixers, weirdly enough. On one possession in the first half, Bagley fell down defending Embiid in the post before he got the ball, and Embiid traveled before dunking the ball as if he was surprised to have all of that space in front of him.

Heading into the fourth quarter, the Sixers had a 14-point lead and an opportunity to put the game away. Because Rivers was able to pull Embiid early in the first and third quarters against an outgunned opponent, Embiid was able to check back into the game and lead that closing push himself. It honestly didn’t take much — a post-up here, a good pump fake there, and some rim runs in transition, beating the Pistons down the floor to force a foul from smaller guys hanging off of him.

The overarching story of this game is that the Pistons are bad, and you could tell the Sixers knew it. There’s something comforting about this team being able to just waltz to a win like this, even with their stars turning in pretty mediocre performances.

• The 2022-23 Pistons are not exactly loaded with tough defenders on the perimeter. A favorable matchup has not always meant a big James Harden game was coming, but he was Philadelphia’s leading man early in this game, basically just bulldozing guys who could not match his strength on drives.

Harden’s best work in this game came in transition, both as a scorer and a playmaker. The Pistons gave them repeated opportunities to run, and Harden seemed to make the right read, the right move, the right decision every single time on the break. Philadelphia overwhelmed Detroit when their defense was scrambling to get back, and Harden thrived in that chaos, sizing up smaller defenders or passing around walls of players if they committed multiple bodies to stop him on his way to the rim.

His halfcourt scoring was dull by comparison, with a couple of early makes from three the best he had to show for his work there. I suppose this game is a litmus test for how much you value pace, because Harden’s biggest contribution was getting them playing with tempo.

• Matisse Thybulle was at his chaos-causing best in this game, giving Philadelphia a huge spark after checking into the game. The Pistons were not prepared for him to challenge their ballhandlers in the backcourt, and Thybulle made them pay for sleeping on him, picking up a pair of steals in the first half on plays where Detroit never crossed halfcourt.

Jaden Ivey got the better of him on some possessions throughout this one, but I thought Thybulle did a nice job against one of the only guys on the Pistons who puts any fear in your heart. His best individual sequence of the game came in the third quarter, with Ivey failing to turn the corner before getting stuck in midair and throwing a pass out of bounds because Thybulle had given him nowhere to go.

He was a needed dose of energy and enthusiasm on a night when the Sixers were pretty clearly bored with the opponent.

• Speaking of causing turnovers and chaos, I suppose the headline coming out of this one is how often the Sixers were able to turn the Pistons over. I’m a little reluctant to give Philly all the credit for that one, as I think it’s more of a young and bad team thing on Detroit’s end, but they certainly played a role in an ugly night for their opponent.

Between Thybulle’s backcourt thievery, Joel Embiid’s size and positioning inside the arc, and De’Anthony Melton slithering around screens for a few breakups of his own, the Sixers forced the Pistons into 20+ turnovers, a number that harkens back to the darkest days of the Process era. I do not miss watching a crappy basketball team every night.

(Since I’m laying on the snark fairly hard in this article, I think it should be noted somewhere that Philly’s defensive engagement was pretty good overall. Embiid was active and vocal in his efforts to hold down the paint, and though the Pistons would have struggled to score regardless, I do think they took one-half of the floor seriously.)

• “They never got out of second gear” would normally be an insult for the Sixers, but I think it was inarguably a good thing that they created quality shots while barely having to work for them. Every night can’t (or shouldn’t) be a hard-fought slog, and they held Detroit at arm’s length all night.

• The only real blemish in this game for the home team was their inability to stop fouling. Doc Rivers has harped on his group for failing to defend without fouling in recent weeks, and he’s going to have a ton of evidence to support that cause after the Detroit matchup. Scott Foster’s crew called this one pretty tight, but that’s not an excuse for the Sixers to reach, swipe, pull, and push their way to a giant free-throw discrepancy for the other team.

Multiple guys were in and out of the lineup as a result of the way the game was officiated. Tobias Harris and De’Anthony Melton both dealt with foul trouble throughout the game, and Harris’ removal from the lineup in the first half took him out of what looked to be a good rhythm, slowing the Sixers’ offense down in the process.

Philadelphia is used to leading the way on the free-throw front, so it’s always jarring to see a team outdo them at the charity stripe.

• Alright, I lied, there was another blemish in this game — this is probably the worst, most apathetic defensive performance James Harden has had as a Sixers player. I think he’s been up and down and sometimes even helpful on that end this year, but this was as bad as most of his lowlight reels. Poor off-ball awareness, no effort on rebounds, terrible on-ball defense, this game had everything. Diallo cooking him on a drive where he was sitting back eight feet off of him was really something.

• Georges Niang could have easily had 30 points in this game. He shot 3/12 from the field on at least 10 wide-open attempts from three. Not his night, so it goes.

• This Pistons team absolutely stinks. I get that Cade Cunningham is out for the year and it’s not exactly easy to replace a guy like that on the fly, but I don’t know what the vision for this team is and haven’t understood it for years. I think every version of the Process Sixers beats this Detroit team except for the 10-72 team, and you might even get a lucky Jahlil Okafor 20-10 in that instance.

They better pray they get Victor Wembanayama because I don’t know what the hope is otherwise.

• I genuinely did not really know what to write about this game. One of the worst basketball games I can ever remember covering in person, and a game without a positive standout performance of any sort. I pity anyone who paid money to attend this game.