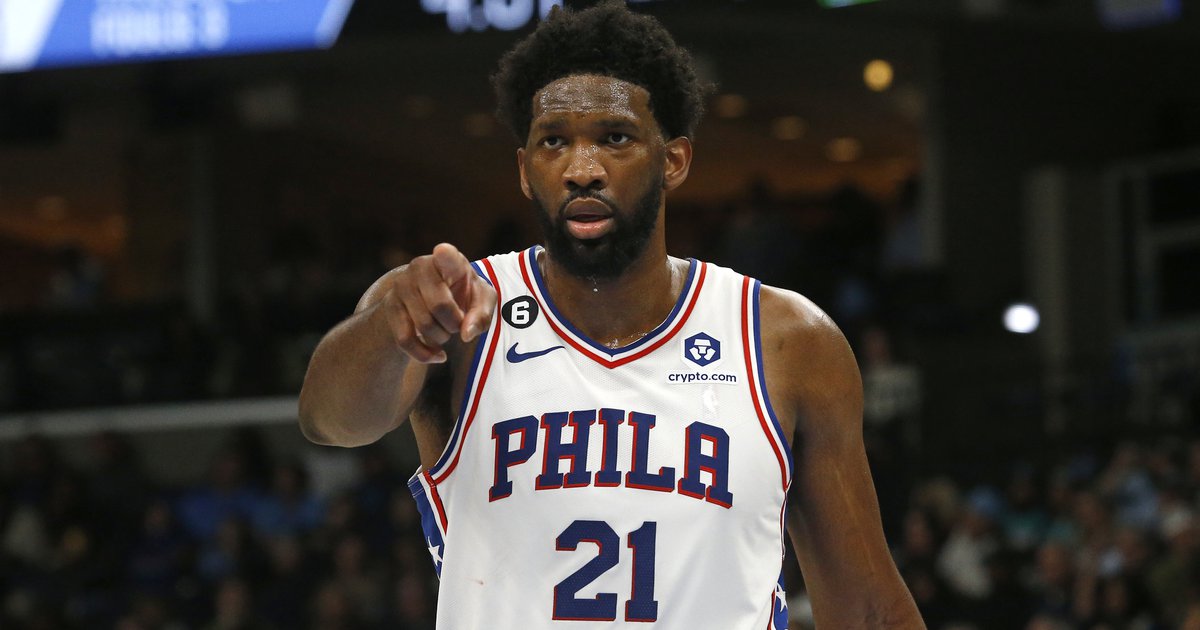 The Sixers nearly puked away a win at home over a struggling Raptors team, but they snuck out a 104-101 victory in overtime to remain undefeated on their current homestand.

• The Sixers’ first half on offense featured some of their best team basketball of the year. Instead of relying on slow, deliberate possessions with Joel Embiid backing his man down for 10 seconds, the Sixers are firing passes around the floor and creating open looks.

We’ve seen Embiid play some absolute howlers against this team — more on him later — with the Raptors swarming him from all angles to punish that sort of style. Early on Monday night, Embiid was barely receiving passes before firing them back out to the perimeter, even making a touch pass or two that reminded you of his background as a volleyball player.

If anything, I thought the Sixers could have been more ruthless about getting Embiid the ball in the post specifically. I’m not exactly the leader of the “Get your ass in the post!” club around here, but the Raptors were basically auto-doubling every time he caught it there, and the Sixers were getting quality looks because he was happy to swing the ball out when the doubles came.

Keep in mind, this all happened with Embiid playing relatively poorly on offense, his midrange touch leaving him for one night in December. Rather than forcing his way into a dynamite game, he kept in sync with the unit, which is something he has struggled to do in the past.

If you want to take positives from this performance, zero in on that first half and their commitment to sharing the ball. De’Anthony Melton built a house of bricks in the first half and the Raptors certainly noticed, but instead of freezing him out of the offense, his teammates trusted him, and Melton made some good on-ball decisions to create quality looks elsewhere on the floor.

You could feel the same connectivity on the defensive end, where the Sixers made it difficult for the Raptors to get a quality look of any kind. Toronto makes it hard enough on themselves — they’re a notoriously bad offense in the halfcourt — and instead of thinking the Raptors would do the work for them, the home team bought in and did what it took to make it as miserable as possible. Every guy in the rotation flew around the floor, and even when the Raptors did score, it felt like they had to get pretty fortunate for a shot to go down. A lot of tightly-contested shots got friendly bounces, so I hope that didn’t trigger any PTSD for you lot.

And then, well, the second half happened. But the defense is what ultimately pulled the Sixers through as the offense went off of the rails. The Sixers could have let this one go in the final stages of the evening, swallowing a bad loss and tucking their tails between their legs. Instead, we got an intense, physical battle that they saw through. Shouldn’t have been this tough, but you take the wins where you can get them.

In all seriousness, House gave them some good minutes off of the bench in Monday night’s game, even throwing in an and-one finish in transition as a nice bonus. House simply playing above-average basketball would be a big deal for them, giving them another solid athlete with two-way value in the rotation. A little consistency would go a long way.

• Tobias Harris was a quiet assassin for a lot of this game, his work coming mostly on closeout attacks and spot-up threes. And really, that has been the story of his season — he has been an accessory to the pain inflicted by their top guys, only playing a leading role when the stars are injured or unwell and sitting on the bench.

By playing his role, it was Harris who ultimately got the opportunity to deliver the kill shots in overtime. After knocking down a shot in the right corner, he made another shot that would have been a four-point play if not for one of the great challenges in recent NBA memory. Even still, he had one of the better games of anybody on the roster.

• I was pretty down on Embiid’s performance in this game for reasons we’ll get to below, but this game is a great reminder of how valuable free throws and by extension foul-drawing is. Embiid was fighting his own touch for most of the night, but by leveraging his physical advantages against a smaller Raptors team, he forced Toronto to take fouls in order to stop him from rolling uncontested toward the rim. That was basically the difference in this game.

There were also some big defensive moments for Embiid late in the game, his length posing all sorts of problems for the Raptors when they tried to attack the paint. Using him in switches is not an all-the-time thing, as they found out early in the season, but it is a nice ace in the hole when they really need it late in games.

• All (or at least most) of the good things we could say about the Sixers in the first half did not apply to Philadelphia’s third quarter. They lacked the snappiness and the seriousness of the opening 24 minutes, getting a bit too casual against a Raptors team that is at least going to play hard even if they can’t generate open shots.

Frankly, I think you can blame the two lead stars for the Sixers ending up in a tight game. Neither played particularly well but for very different reasons.

While Embiid’s passing out of the post was good and decisive for most of the night, there wasn’t much going for him on offense, where he was way too reliant on tough shots from midrange. Because Toronto sent so many doubles at him so quickly, he seemed a little trigger-happy on the rare occasion where they left him in single coverage. He created quality looks for his teammates, certainly, but there were very few of those for Embiid, who had a pedestrian scoring night by his standards.

That said, I thought it was the other guy who was a bigger problem in this one. We saw in the playoff series that a team filled with wing-sized athletes makes it difficult for him to get rolling as a scorer, and that showed up yet again on Monday night.

Offer some credit to the Raptors for disrupting Harden at the point of attack, but the low Embiid shot quality also falls on James Harden’s shoulders to some extent. I thought Harden left a lot of meat on the bone even when the Raptors gave him opportunities to attack as a scorer, either because he couldn’t get by guys or because he focused too hard on his playmaking duties. Too many possessions went from Harden’s hands inside the arc to P.J. Tucker in the corner, with Tucker bringing the offense to a halt and the Sixers having to reset the offense. When he did get downhill, it rarely felt like Harden got there with any purpose, his shots around the rim coming when it became clear he had no other choice.

With the Sixers in a dogfight late in the game, it was the Raptors who played decisively and shared the ball, the Sixers stringing together too many possessions where they tried to rely on individual talent instead of trusting what had gotten them a lead. Embiid pulling up for a hero-ball three with time to hunt a better shot was a microcosm of what had gone wrong.

At one point, they ran four consecutive isolations with nothing else happening away from the play. Leaning on your best players is one thing, but you do have to actually run offense, and the Sixers somehow forgot that after playing some of their crispest basketball of the season early on Monday. The Sixers had a chance to effectively put the game away, ball in hand with a two-point lead in the final 30 seconds, and Harden dribbled to nowhere for a contested midrange look that clanged off of the iron.

And let’s take it a step further — at least Embiid has the recent body of work and good possessions from Monday night’s game to justify hero ball and isolation play. Harden’s resume is terrific, but he was without a hope and a prayer for most of Monday’s game, yet he kept opting to dribble down the clock and call his own number in one-on-one situations. I appreciate the confidence, but come on, man.

• If De’Anthony Melton just has a normal, even below-average night as a shooter on Monday night, the Sixers probably put this game away by halftime. It is hard to overstate how open he was on most of the shots that were created for him in the first half — whether it was because of good ball movement or the Raptors eventually ignoring him, they were able to get him a clean look at the rim on what felt like every other possession.

Unfortunately for Philadelphia, Melton left his shooting boots at home, and they ended up in a second-half slugfest. To his credit, he managed to knock down a couple of huge shots late in the game, somehow shaking out of a cold spell at the best possible time.

• The Sixers forgot how to run a zone offense for most of the first half, which turned what looked like a potential blowout into an actual basketball game. They were not helped by the lineup Doc Rivers decided to put on the floor, which was, well, questionable to say the least. I might have used the words “war crime” while watching from press row.

There are times to put Matisse Thybulle in the game. I would say the time to do so is not when the other team is in the midst of a run while sitting in a 2-3 zone and daring you to shoot threes. Rivers (IMO) has been good about using Thybulle situationally this year, but I didn’t like that at all.

• The officials were absolutely terrible in this game, full stop. Bad decisions on block/charge calls, missed calls on push-offs, techs handed out left and right as the game got out of control, this game was a mess. They never had a good feel for the game, and it showed.