Three pivotal plays from the Eagles’ win over the Bears 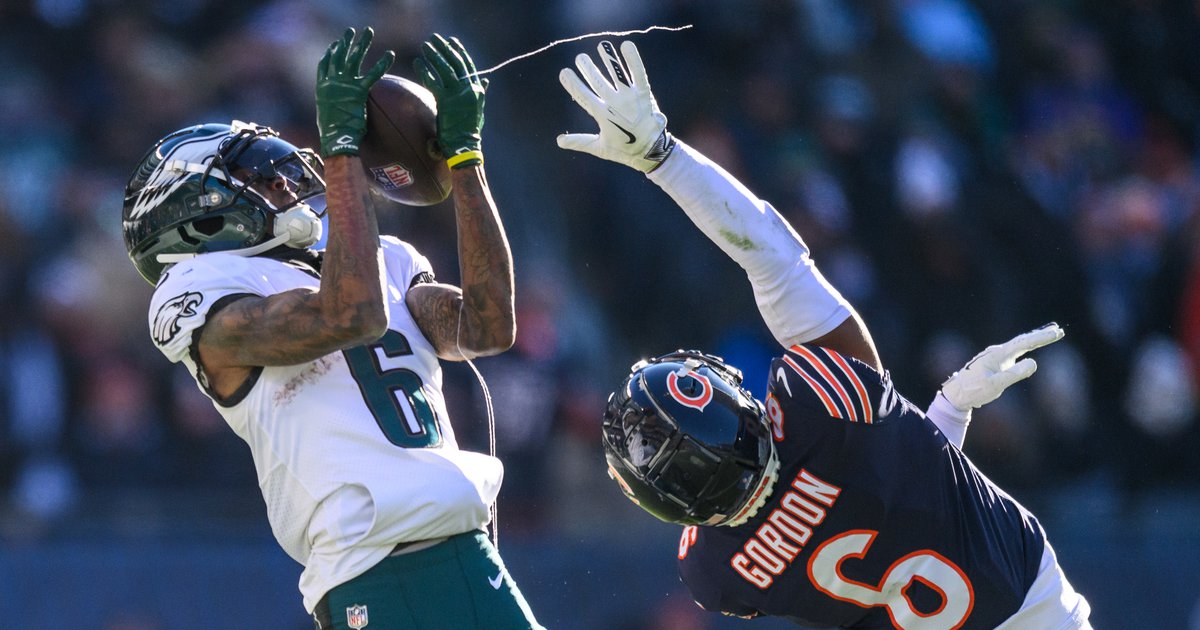 I didn’t know this week’s edition of “three pivotal plays” was going to shake out. The Eagles have made life easy as of late with their convincing wins, but Sunday in Chicago was a little dicey. Nevertheless, the Eagles pulled out their league-best 13th win of the season, beating the Bears 25-20, and are on a smooth path to locking up the No. 1 seed in the NFC.

It wasn’t pretty, but life is good for Eagles fans right now (also because Dallas lost in hilarious fashion). Here were the three plays that most shifted things in the Birds’ favor at Solider Field…

The Eagles’ offense was stagnant and frankly infuriating to watch for almost the entire first half. Jalen Hurts was making uncharacteristic mistakes. The gameplan and play-calling from Nick Sirianni and Shane Steichen was equal parts confusing and stale. How many wide receiver screens to Quez Watkins does a team need?

Hurts was airing the ball out with mixed returns all day in the Windy City, but this deep shot to DeVonta Smith gave the Birds’ offense a desperately needed spark right before halftime:

The dude’s got the goods!

Is Smith… better than A.J. Brown? I’m not saying that to start drama for a 13-1 team with immaculate vibes and dreams of a parade down Broad Street, but mostly noting how absolutely wild it is that the Birds have two receiver this good. In my younger years, watching DeSean Jackson and Jeremy Maclin go to work was great, but they don’t come close as a duo to the Batmen. No Robins needed. They’re both alpha No. 1 guys. They combined for over 300 receiving yards!

Smith’s route-running might be in elite territory already and his balance when he goes up to make those acrobatic catches is flawless. The pre-draft size concerns for a Heisman Trophy-winning receiver who dominated the SEC are looking a tad foolish right now, huh? Don’t overthink things. The guy is a flat-out football player and a crafty playmaker.

Smith’s huge catch put the Birds in Chicago territory, allowing them to punch in their first TD with a Mike Vick-esque QB draw from Hurts:

The Eagles led the rest of the way until that final kneel down gave them the W.

Let’s give the Eagles’ special teams some love!

Again, the Eagles weren’t their best selves offensively against the Bears, so any chunk play they could get was a needed boost. That big Smith catch above was one such play as, was a 58-yard kick return from Boston Scott to begin the second half.

With the Eagles beginning their drive at the Chicago 42, they didn’t have much work to do to punch it into the end zone thanks to Scott. A couple of minutes later and Hurts was bruising his way to his second TD:

Scott has always made the most of his opportunities in his five years in Philly. He’s provided some juice to the Eagles return game the last two weeks, as this comes on the heels of a 66-yard return he had against the Giants at the Meadowlands.

The Eagles’ special teams unit has been much maligned this season, and rightfully so, but it would not surprise me to see Scott rip off some 50-yard kick return come mid-January with Lincoln Financial Field rocking.

(Note: I couldn’t find online video of Scott’s return. Take my word for it that it was important.)

The Eagles were dialing up go balls all afternoon. For a game where the wind was clearly having an effect on play, it was bit confusing, but, hey, when you have weapons like Smith and Brown, I get it. They didn’t connect often, but there was no bigger throw all afternoon than this dime from Hurts to Brown that was the beginning of the end for the Bears:

What a throw. What a catch.

A goal-to-go TD from the Eagles was inevitable after that, one that resulted in yet another Jalen Hurts rushing score with the most unstoppable play in the NFL:

A wrinkle to Hurts’ 2022 development: when QB1 was going deep last season, it looked as if tossing the ball downfield like that was straining and unnatural for him. That throw to Brown was fluid straight from the pocket on a huge third down. “Perfection,” as Michael Fassbender’s Magneto would say in “X-Men: First Class.”

Even when Hurts had his first “bad” game of the season, he threw for 315 yards, rushed for three touchdowns and made two of his best passes of the whole year. MVP stuff!

As for the wideout who hauled that in, that play’s why you part with a first-round pick for a player of Brown’s caliber. He’s so physical. Bears cornerback Jaylon Johnson played him well all game, but Brown bested him at the most important point of the day. Brown’s nimble footwork by the sideline to stay inbounds was huge, showcasing that yards-after-the-catch ability that made trading for Brown so enticing in the first place. His deep-ball tracking? Again, “perfection.”

The Brown trade is quickly going down as one of the best in Philly history, especially if this season has a Super ending.

Next up: Dallas Week…