Eagles’ pass rush secures an ugly win against the Bears 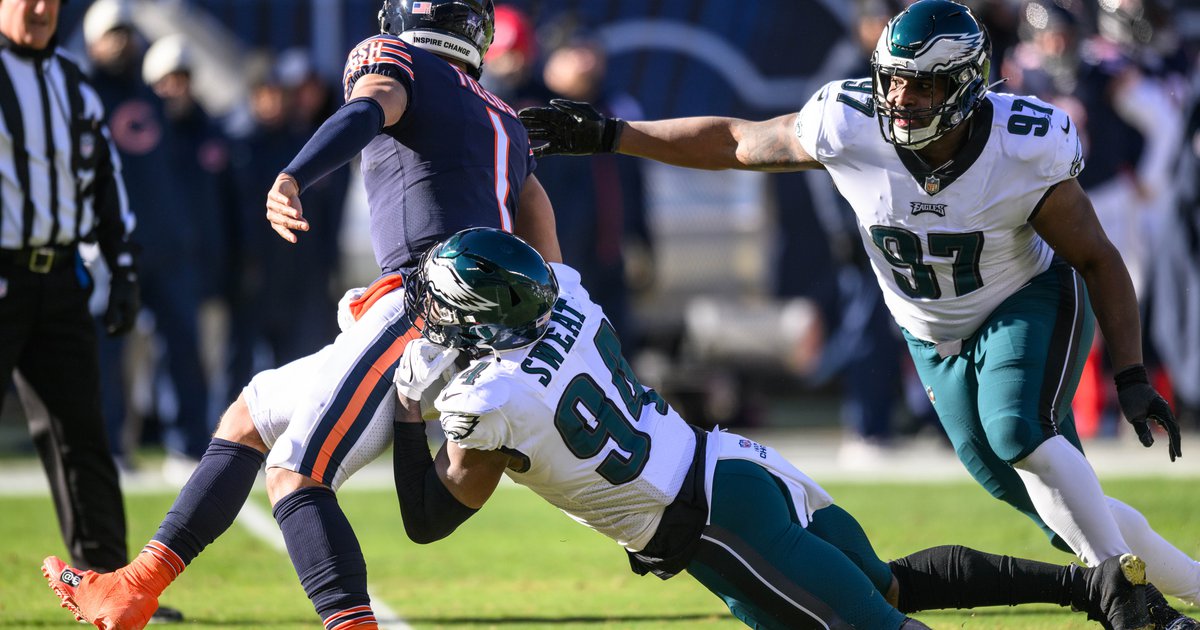 Sometimes you just need the defense to lock it down.

The Eagles’ offense was out of sorts against the Bears for the better part of Sunday and was struggling to put up points for the first time in weeks.

But Chicago, even though Justin Fields and company had their moments, couldn’t capitalize on it. Any team that gives up six sacks and 61 yards lost from them probably wouldn’t.

The Eagles survived the struggling Bears, 25-20, to improve to a still NFL-best 13-1, and that was thanks largely because of a pass rush that kept Fields, for the most part, under control.

Josh Sweat, maybe one of the more underrated edge rushers in the league, sacked him twice and had three tackles for a loss.

Javon Hargrave, from the inside, brought down Fields a couple of times too.

And Haason Reddick, the Camden native whose only making a stronger case as one of Howie Roseman’s best signings, was a force all day. He had two sacks of his own, four tackles total, and a fumble recovery on a jet sweep late in the third quarter that stopped a Bears team down just four at the time in their tracks.

Hargrave, in a contract season, now has a career-best 10 sacks. Sweat’s right there with him with a career-high 9.5 to continue a trend of steady growth year over year in his fifth season.

Reddick has a team-leading 12 sacks that are just half of one shy from tying his career best.

So far seems like $45 million well spent, along with the mid-season signings of veterans Linval Joseph and Ndamukong Suh, which combined have the Eagles with an NFL-leading 55 sacks and quite possibly the deepest defensive front in the entire league.

And that’s not even to mention Brandon Graham, who’s still going strong at age 34 even after last season’s Achilles tear; Fletcher Cox, who’s looked much better since playing an exhausting amount of snaps in that lone loss to Washington a few weeks back; and linebacker T.J. Edwards, who made a number of key tackles behind the defensive front Sunday, including a big stop over the middle on a Bears 3rd down late in the third quarter that forced a punt.

“Everything we practiced this week, everything we talked about, it held true,” Graham said. “It’s just all about making those calls when we’re out there.”

It wasn’t all perfect Sunday, far from it.

Again, Fields had his moments and 95 yards rushing in total, including that huge 39-yard run midway through the second quarter, made worse by some sloppy tackling, that set up a Bears touchdown for their 6-3 lead. The Eagles never fully put Chicago away either, needing an onside kick recovery and a drain of the clock to end it after a late touchdown kept the Bears within five.

It was an ugly win against a lowly team, made surprising because of how fluid and effortless the Eagles’ have looked in the two games prior.

But it is still a win, made possible by a pass rush that sent Fields backward for every step forward.

“We stopped the run as much as we could,” Graham said. “Then once we were able to get dropbacks, that’s when the sacks started to pile up.”

And they’ll steal you a couple ugly ones along the way too.