Mailbag: Could the Eagles have two 1,000-yard rushers and receivers, and how rare would that be? 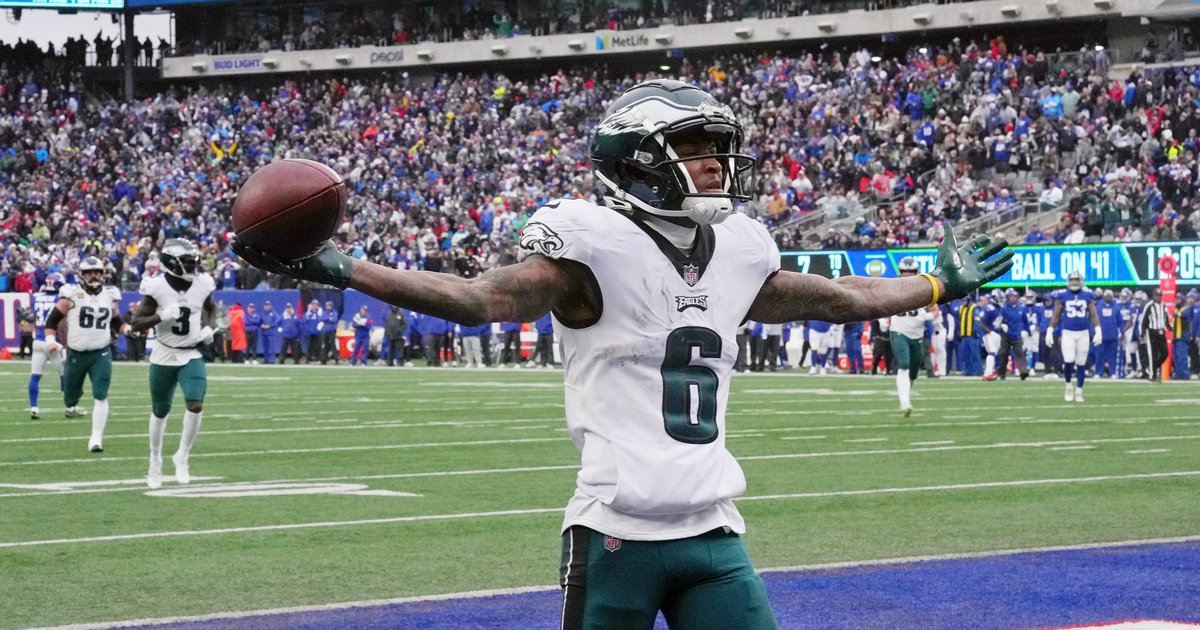 Earlier this week, we solicited questions for an Eagles mailbag via Twitter. Thank you as always for doing half the work for me. This is Part II of a two-part mailbag (Part I here).

Question from @Omskk: What chances do you give for DeVonta Smith and Jalen Hurts to join A.J. Brown & Miles Sanders with 1,000 yard seasons? Has any team ever had two of each (rushing/receiving) before?

There have only been seven teams in NFL history with two players that rushed for over 1,000 yards:

Hurts has 686 rushing yards on the season, and is on pace for 897. Factor in that the Eagles could be in a position to rest starters down the stretch, and he’s probably not going to make it. It’s still possible, though.

There have been 146 instances in which at least two players on a team went over 1,000 receiving yards in a season. Obviously that’s a lot more common. DeVonta Smith has 775 receiving yards so far, and is on pace for 1,013.

But your point is well taken here. It’s rare for a team to have four players rack up as many rushing and/or receiving yards as Sanders, Brown, Hurts, and Smith have this season. (Also, if Dallas Goedert hadn’t gotten hurt, we’d be inserting him into this question as well.)

Question from PaimannL: Given the A.J. Brown trade last year, is there a non-QB player you might trade the Saints pick for, assuming it lands in the top 5? Feel like it would have to be a young OL, DL, or maybe CB, still on a rookie contract. Or is it better for the Eagles to hold the pick?

If my research isn’t failing me here, the last time a team traded a known top 10 pick (as in, the draft positioning was known at the time of the trade) for a veteran player was in 2005, when the Vikings traded a 28-year-old Randy Moss to the Raiders for the seventh overall pick and a seventh-round pick. At the time that deal was made, Moss was a mega-star who was averaging 82 catches for 1306 yards and 13 TDs per season over his first seven seasons.

The Eagles are not flush with projected cap space in 2023 or 2024, and they have a contract extension for Jalen Hurts looming on the horizon, so they feel like an unlikely candidate to break convention and trade that pick for an expensive (or soon to be expensive), established player. It’s a lot more likely that if they trade that pick, it’s for a bounty of extra picks that they can use to fill their talent pipeline with young, cheaper players.

Question from ChinoLTS: Top 3-5 players for each 1st round pick.

I covered the top five options with the Saints pick a little while back in another mailbag, and landed on DE Will Anderson (Alabama), DT Jalen Carter (Georgia), DT Brian Bresee (Clemson), DE Myles Murphy (Clemson), and OT/OG Paris Johnson (Ohio State). I expanded with reasoning on those five players in that mailbag.

Projecting the what players will go top 5 this far out isn’t exactly a science. Projecting who will be available in the bottom of Round 1 — and who is worthy of selection there — is even more difficult to predict. With that disclaimer in place, I’ll venture my top 5 with the Eagles’ own first-round pick, based on simulated mock drafts I’ve messed around with:

You can click any of the links above to read more about each player from our prospects series.

Question from quacktasmic: The Eagles seem to have a low projected cap space next year, with a lot of players who still need to be extended or paid. I’m struggling to see where they free up significant room outside some extensions/restructures (Darius Slay, Lane Johnson, Jake Elliott). Where do you see money being freed up?

You hit the big three. Well, the big two, plus Elliott.

• Darius Slay is the big one. He has a scheduled $17 million salary in 2023. They can convert around $16 million of that into a signing bonus and spread it into future years, and feel comfortable enough doing that with the way Slay has played this season.

• Lane Johnson has a scheduled $14,155,000 salary in 2023. The Eagles could convert around $13 million of that into a signing bonus. Same thing — he has shown that he remains the best RT in the world.

So with those three players alone, they can free up a healthy chunk of spending money. More generally, I would say that the Eagles always find a way to stretch the salary cap. I think it’s pretty safe at this point to trust them fully in that aspect of front office management.

Question from Manu_99U: If you had to make an all-bust Eagles team, who’d you pick as starters?

I love this question, but I’m going to earmark it for draft season. I’m just putting it here so that someone can remind me to circle back to it in April.

Question from @thelancesayers: Have you ever discussed on the BGN podcast what your favorite game you ever went to was? As far as the regular season, of course.

I don’t think so. Obviously, the 2017 playoff run was very memorable, so they’d be at the top of any list like this. But if you’re limiting me to regular season only, here’s my top 4, in no particular order:

• The Miracle at the New Meadowlands: This was actually the first road game I ever covered. The Eagles had beaten the Giants in like five straight games heading into this matchup, so when Eli Manning hit Kevin Boss for a TD to put the Giants up 31-10 with 8:17 to go, there was a loud cheer in the Giants press box. I wondered if that was normal, and if the “no cheering in the press box” thing was just a myth. (It wasn’t — they had broken code, so to speak, and I haven’t heard a cheer like that in the press box since). Anyway, their joy was short-lived.

• Chip’s first game: Remember the first game of the 2013 season, when Washington was blindsided by Chip Kelly and the Eagles’ extreme up-tempo offense? It was a sight to see in person.

• The 2017 game against the Chargers: If you’ll recall, the Eagles played the Chargers in a soccer stadium in L.A. in 2017 because SoFi Stadium was not yet completed. I’ve written about that venue here before, but it was awesome. I had this big work station outside on an absolutely gorgeous Southern California day in a stadium that was like 85 percent Eagles fans.

• The last 6 or so games of the 2014 season: In 2013 and 2014 I worked at Philly.com (the online site for the Inquirer at the time),  and got hired by PhillyVoice in November of 2014, but we didn’t actually launch until January of 2015. After the job switch, I still attended games because I had to keep up with the team, but I didn’t have to actually write because the website didn’t yet exist. So I’d show up, watch a football game, shoot the s*** in the locker room after the game, and then I’d pack up a leave. It was all the fun parts with no actual work.