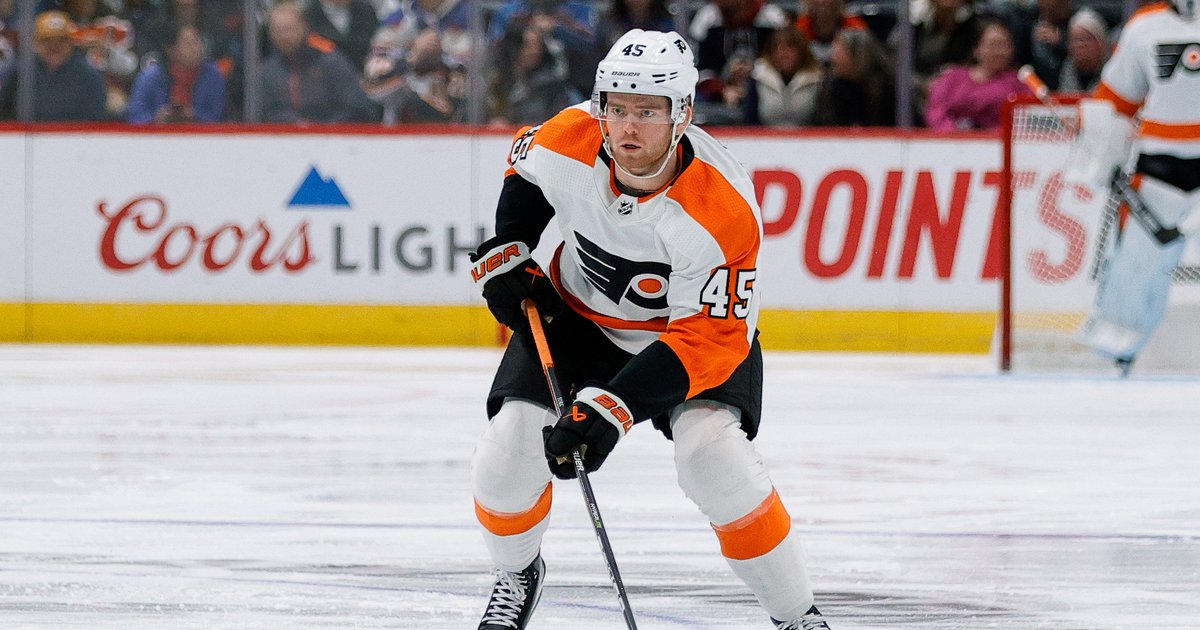 Cam York was in training camp just trying to survive.

The skill was there, but for John Tortorella, the mentality wasn’t.

‘That’s what bothered me the most,” the Flyers’ head coach said ahead of their 2-1 win over the New Jersey Devils on Thursday. “I just watched him through camp as just kind of ‘get through camp.’ I want him to have a mindset of making a difference.”

York didn’t have that then, not yet, so he didn’t make the cut.

His status as the 14th overall draft pick in 2019 and the fact that he finished last season with the Flyers didn’t matter. The 21-year-old defenseman was starting the new year with the Lehigh Valley Phantoms down in the AHL.

It was a shock, but it was the right thing for him. He seemed to know it too and took it in stride.

“You can’t dwell on a bad break or whatever,” York said. “So I tried to just flip the switch right away and get to work as soon as the first game rolled around.”

By the start of December, he was leading the Phantoms in points with 13 through 17 games.

“He’s on the right track,” Phantoms coach Ian Laperrière told The Philadelphia Inquirer that week. “Going to keep playing him. He’s going to keep getting rewarded if he plays the right way, and he’s going to be fine.”

York kept playing the right way and the call back up came a few days later ahead of the Flyers’ four-game road trip.

With Tony DeAngelo out to deal with a personal matter, York was inserted into the lineup last Friday against Vegas and the difference in his game was clear. He was skating a lot more fluidly and a lot more fearlessly as evidenced by this sequence against the Golden Knights:

Thought this was a nice sequence from Cam York.

Gets Flyers out of their zone with a subtle fake. Then plays solid defense and springs a 2-on-1 with a good pass. pic.twitter.com/hJ2VNSzbTt

And his goal against Colorado on Tuesday night where he kept with the puck the entire way to the net:

It was more than the skating for Tortorella though. For him, York has been much more aggressive in his approach since his call-up too, which pays off at both ends of the ice for a team that has often struggled in both for much of this season.

“He’s really done a great job escaping and getting us out of our end zone,” Tortorella said. “But the thing I like about his game that no one talks about is I think he’s been good around our net defensively too. I think he’s tried to be physical, boxing people out, closing people out in the corners.”

“It’s helped me a bunch to be more assertive,” York said. “The more I’m aggressive, the more we can play offense and I feel like I can create opportunity for my teammates. That’s what I’m trying to do out there. I feel like I’ve done a better job at that so far.”

York hasn’t been a game-changing revelation. The Flyers still went 1-1-2 on the trip and are an unsteady 3-5-2 in their last 10. There’s going to be pain, Tortorella reiterated Thursday, and a lot more of it to come.

But in the four games since his call-up, York has been a consistent bright spot (1 goal, +3 rating), albeit in a so far small sample size. The skill was always there, but now the mentality seems to be too.

“He’s answered the question I had for him when I sent him down: ‘When are you gonna try to make a difference?'” Tortorella said. “I think he’s trying to show us that. I think in the short minutes that he’s played, the few games he’s played, I think he’s done a really good job.”

Things can always change, Tortorella added, but as far he’s concerned, York is in the lineup right now and isn’t going anywhere with the way he’s played.

It won’t all be bright. There will be struggles, mistakes, bad games, etc., but how York responds to them when they do happen from here on out will be key, and he’ll have some freedom to work through it.