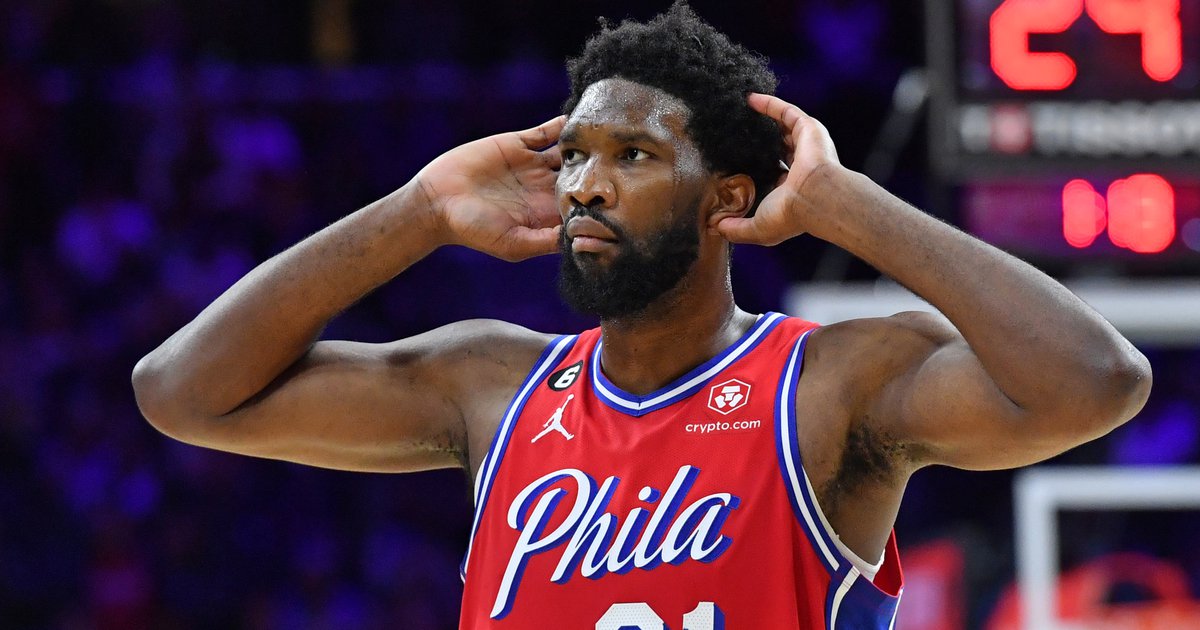 The Sixers played with their food in the first half and didn’t suffer much for it, ultimately picking up a comfortable 118-106 win over the Warriors.

• Joel Embiid is not going to come out and blow the doors off every opponent in the opening quarter, even if it has felt that way lately. Kevon Looney did a decent job at slowing him down early in this one, aided by teammates who crowded the middle of the floor in an effort to get the ball out of Embiid’s hands. Golden State had some success frustrating him early on, Embiid watching jumpers bounce harmlessly off of the rim.

It took some old-fashioned post-play to change the tenor of this game, and it didn’t hurt that he got a few matchups with James Wiseman to get his feet under him. Embiid waived teammates away as he caught the ball repeatedly on the left block, using power moves in single coverage to draw fouls and build up steam at the line. And once he saw some free throws go down, it felt like the world opened up for him. The Warriors tried to mix in zone looks from time to time, and instead of the Sixers playing rattled, Embiid caught the ball in the middle of the zone and threw darts to shooters on the perimeter once the zone collapsed.

I don’t think this was a “flip the switch” performance from Embiid, but there was definitely a point where it seemed to click that he was the best player on the floor and could change the flow of the game if he wanted to go out and take it. It did lead to some ill-advised moments of aggression, like a hilarious transition turnover where he tried to dribble past Jordan Poole and forgot the ball, but the Sixers got moving in the right direction.

Embiid’s defensive contributions in this game came in unorthodox situations, the big man making a few strong contest efforts in transition to derail fast breaks. While he has made some spectacular chasedown blocks over the years, he’s often been too far removed from transition plays to make an impact on their defense there. It was nice to see him make use of hanging in trail positions, even if you don’t want him as a passenger in the offense all of the time.

It felt like a pretty ho-hum game for him, and he still marched to a line that would be a career night for a lot of guys around the league. Pretty absurd player, it must be said.

• The good news for Philadelphia at the end of the first quarter, a period where they stunk it up, is that they had James Harden in an excellent scoring groove. He has earned praise for his playmaking and the impact that has had on the team’s offense, but it has been the Joel Embiid show around here lately, so his scoring outbursts have been limited to mini runs. They got much more than that in this one, with Harden showing the sort of diversity in scoring that powered him to MVP runs.

A matchup with Jonathan Kuminga put Harden against the sort of long, athletic wing who has given him problems in recent years, but Harden did an excellent job of making Kuminga guess what he would do next in this game. There were repeated attempts to get to the rim, Harden using both strength and speed to get by the much younger player. Golden State began affording him a bit more space on the perimeter — partially because they feared Embiid in the middle of the floor — and Harden took advantage of the separation, pulling up for three whenever he was afforded extra space.

I would be happy to see the more aggressive version of Harden on a nightly basis because (and he knows this) he opens up more lanes for himself as a passer whenever he puts pressure on the opponent as a driver. Finding the balance has been tough for him at times, which is an understandable problem working next to Joel Embiid, but this game was a great example of both guys being able to eat. Harden threw the opening haymaker, giving Embiid time to settle in and eventually take over the game. It’s what he’s supposed to do as the co-star, and they have looked like a natural pairing in all but the Houston loss recently.

We even got an assist from Harden where he pushed a pass through a pair of legs for a Georges Niang three, so the playmaking highlight factory marches on. This wasn’t an especially dynamic passing game for Harden, and we still got some beautiful outlet feeds and on-the-money entries to set up easy baskets. Easing your way into eight assists tends to be the sign of a good playmaker.

• We’ll get to their transgressions below, but De’Anthony Melton and Shake Milton did well to rebound from tough starts to this game. On Milton’s end of things, it was just about getting out of his own way on offense. The first half was filled with clunky moments from him, poor ballhandling leading to awkward layup attempts and stalled-out possessions. But he settled down at the half, perhaps because Rivers allowed him to start and settle into a groove.

I think with Melton specifically, you can see the offensive IQ shining through even when plays don’t come off for him. The Warriors sent quite a few off-ball doubles at Embiid, and Melton’s off-ball activity ended up getting them good shots on those possessions. Treating it as if the Warriors were playing zone, Melton cut to the middle of the floor on one second-half possession, catching a pass before immediately firing one out to the perimeter for an open James Harden three. Cash money.

We discussed the argument for starting Melton and switching things up the other day, and I expressed some reservations about the size challenges you would run into there. But you can certainly argue he plays a lot bigger than his height — with the game still in reach and about three-and-a-half minutes to go, Melton climbed between two Warriors players and pulled down an offensive rebound, scoring on the putback after making sure the coast is clear.

• Three buckets for P.J. Tucker in one game, we might as well start planning the parade route.

• The Sixers never really got out of third gear in this game, and they still picked up another win on this homestand. You don’t have to win them all convincingly, but they need every victory they can get.

• From a discipline perspective, Philadelphia’s first half was quite a mess. I don’t think there was a single guy who rose above and got them pointed in the right direction, with a lot of systemic breakdowns and miscommunications adding up to easy makes for the Warriors. Give credit to the former Villanova star, Donte DiVincenzo, for capitalizing on the open looks they gifted him, but they didn’t make him work especially hard for those.

One subplot that you had to prepare for coming in was Kevon Looney giving Joel Embiid a bit of trouble. Though he didn’t have Draymond Green alongside him to give Embiid problems as a weakside helper, Looney is still a tough, intelligent defender in his own right. He was able to force Embiid into some tough shots from midrange, but perhaps more importantly, Looney made him work on the other end. The Warriors killed the Sixers on the short roll after Embiid came up further against pick-and-rolls, and the back-end defense behind him left a lot to be desired.

Melton was uncharacteristically terrible on the defensive end in the early moments of this game, contributing to the problems we mentioned at the top of this section. He took bad angles on closeouts, botched switches with Harden, and seemed to be unsure of himself and where to be at times. He eventually got into the game and navigated screens the way you’d expect, and that cut into Golden State’s success. And to be fair to Melton, I don’t think you can blame him for Jordan Poole hitting some insane shots in the third quarter, but giving the Warriors the runway to that moment partially fell on him.

(On the other hand, Poole had a run toward the end of the third quarter where he flat-out smoked Melton and Matisse Thybulle on I want to say 4-5 possessions in a row. Embiid was able to bail Thybulle out on one of those, and Thybulle would get revenge with a block near the end of the quarter, but it was tough sledding out there.)

The Sixers would eventually clean things up, with better low-man rotations and crispness off the ball, but it was still not their best work. Harden will get a pass for being pretty terrible on defense for most of this game, and because he was relatively engaged when he was on ball. In off-ball situations where they needed his attentiveness, he was adrift.

• A big game from Donte DiVincenzo was basically inevitable — the local hero comes back to Philly and goes off is a story we’ve seen quite a few times — but they could have attempted to guard him in the first quarter. Miscommunications and botched rotations led to a series of open threes for him to start the game, and that made up most of Golden State’s early lead.

• Maybe this game will help people appreciate Tobias Harris’ importance to this team. He does a lot of stuff that helps tie their various pieces together on offense, even though we spend a lot of time thinking about and discussing who they could trade him for. This is a game that is probably a comfortable blowout with Harris in the lineup.