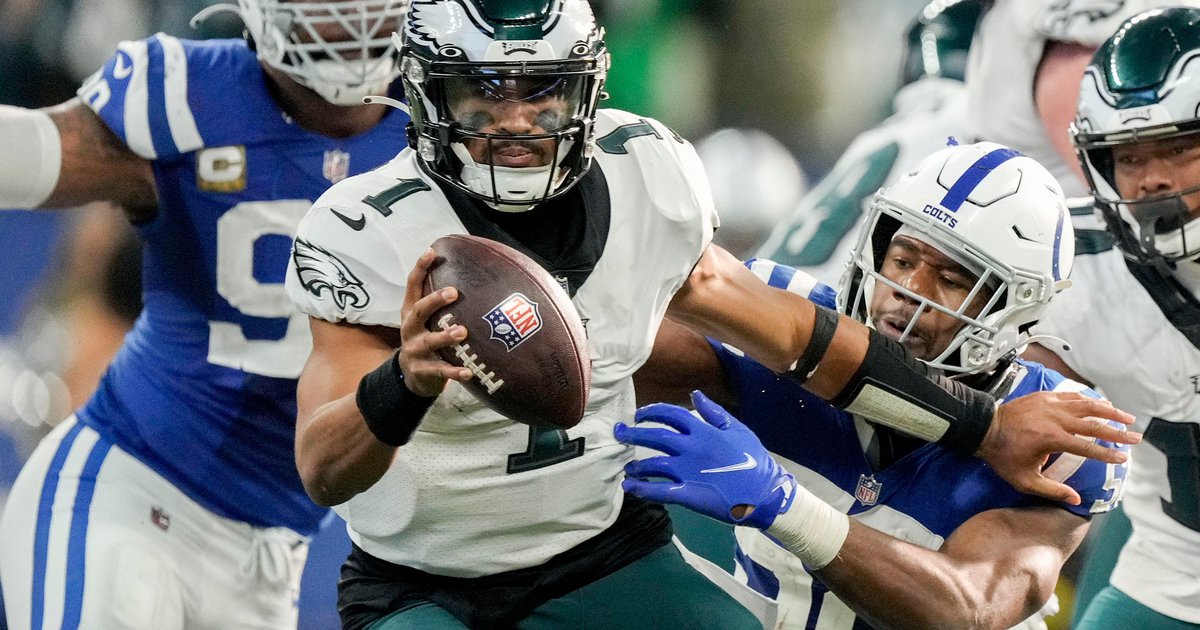 The last time the Eagles and Packers saw one another was in December 2020.

The Birds were falling apart. They were injured like crazy, had little cohesion, and Carson Wentz was just BAD. Doug Pederson had enough and benched him for Jalen Hurts, unofficially bringing a close to one era and the start of another.

The Packers, meanwhile, were a force in the NFC and a popular favorite for the Super Bowl.

Now the Eagles are running with the best record in the NFL and Hurts as an MVP candidate.

It was revealed this week that Aaron Rodgers has been playing the better part of this season with a broken thumb.

That makes sense, as Rodgers has looked nothing like the MVP of the league that he was the last two seasons, and the Packers have gotten out to a 4-7 start. While I’m sure Rodgers will slather up his hand with horse paste and dance in the rain with the local shaman, that thumb isn’t likely going to get much better as the season continues.

Rodgers hasn’t been the only reason for the Packers’ struggles this season. They’ve been less dangerous through the air after trading Davonta Adams, their offensive line has had six different starting combinations, and their defense has underperformed. They’ll also be without their best pass rusher, Rashan Gary, and a starting CB in Eric Stokes.

Still, they have talent, and I imagine they’ll attempt to shorten the game by running it early and often, just as the Eagles’ last three opponents — the Texans, Commanders, and Colts — did as well, with varying success. The Packers are capable of playing “keep away” with the combination of Aaron Jones and A.J. Dillon out of the backfield. If they’re able to stay on schedule, convert short third downs, not turn it over, and hit on an occasional big play down the field, they can beat the Eagles.

Ultimately though, the Eagles are simply a much more talented team this season, and while I believe it will be another struggle, the Birds should get to 10-1.

I can’t really explain why I feel like the Eagles are going to dominate on Sunday night — it’s just a gut feeling. The Packers have been horrible underachievers, and Aaron Rodgers has been playing with a hand injury. I am a little worried about the Aaron Jones-AJ Dillon duo giving the Packers a time of possession advantage and following the Commanders’ playbook to beat the Birds, but I think the idea of being embarrassed by an underdog on back-to-back primetime games is enough to coax the best out of the Eagles offense. I think they explode for 30+ points.

After Aaron Rodgers spends his Thanksgiving without his family and enjoys a nice mushroom-based side dish, he’ll come to Lincoln Financial Field, where he’s 3-1 in his career, including a 2010 playoff win. That Super Bowl and MVP-winning version of Rodgers, however, is a thing of the past.

I expect the Eagles’ defense to have another steady performance, even picking off Rodgers, who’s one of the least-turnover prone quarterbacks in NFL history. How about C.J. Gardner-Johnson adds to his league-leading interception total?

As for when the Eagles are on offense, this Packers defense is susceptible to the run. I could see them rushing for over 200 yards on the ground, which they’ve already done twice during the 2022 season. Jalen Hurts has showcased the ability to beat opponents with both his arm and his legs this year and I expect we’ll see a little bit of both on Sunday night.

I say they cover!

Aaron Rodgers in a primetime game would have scared the hell out of me as recently as a year or two ago, but the Packers have looked pretty ordinary with him at the helm this year. Rolling with the Eagles even if they have shown some worrying signs in recent weeks.

The Eagles still look a bit shaky after Sunday’s win in Indy, but the more I think about this year’s Packers, the less I’m concerned about them. There’s just not much going on there. Aaron Rodgers doesn’t really have anyone that can get open and has no time to wait for them either. I think this defensive line now, with Linval Joseph and Ndamukong Suh filling in on the inside, is just going to punish him all day. He’ll start forcing throws out of frustration and one of C.J. Gardner-Johnson, Darius Slay, or James Bradberry will be there to catch them.

The Eagles offense, meanwhile, is just going to do its thing. I’m feeling a big night for A.J. Brown.

The Eagles have no choice but to tighten things up as they get into a playoff push. As crazy as it sounds, I actually think the black uniforms help add an extra layer of energy to this team. They are flat at times in the first half, a far cry from their second-quarter domination earlier in the year, and have seen a failure to keep their foot on opposing teams.

You should fully expect the Eagles to win this football game, mainly because the Packers are shot. There are already trade columns out on where Rodgers will play next year and how much trouble this team is in. While the Eagles certainly have warts for a 9-1 team, there is nothing remotely close to the level of dysfunction happening on the Packers’ sideline.

Matt LaFluer is learning the hard way that if you don’t have a healthy, motivated, or even competent Aaron Rodgers then life comes at you faster than A.J. Brown on a fly route.

It’s the NFL, so nothing comes easy, but it will certainly look like that for most of the game.

Whenever Aaron Rodgers and Green Bay are on the schedule, you generally circle it but the four-time MVP will arrive in Philadelphia in the midst of a rare down year tied to everything from a banged-up offensive line, young receivers the star quarterback doesn’t trust, and a defense with too many holes that have only been exacerbated by the season-ending ACL tear to star pass rusher Rashan Gary.

The 9-1 Eagles are simply better than the Packers right now but they’ve also hit a bit of a lull, resulting in their first loss against Washington and a nip-and-tuck win over pedestrian Indianapolis. Rodgers, meanwhile, has started to ramp things up with speedy rookie receiver Christian Watson and it’s hard to take anything for granted against this quarterback, who defensive coordinator Jonathan Gannon “does things that other guys can’t do.”

It’s hard to imagine Philadelphia losing to the Packers with all the issues going on with Green Bay but it’s not that difficult to picture another grind-it-out affair as the Eagles try to find their way offensively without Dallas Goedert. In fact, it’s probably another big play late from Jalen Hurts that put the Eagles over the top.