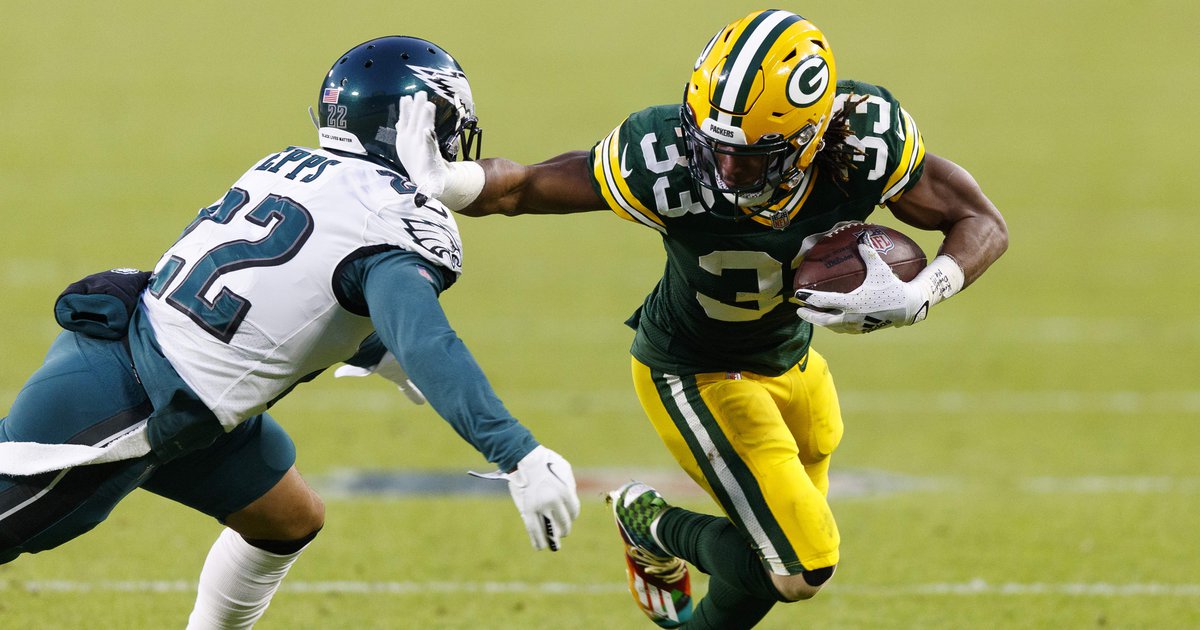 After losing their first game of the season to the Washington Commanders, the Philadelphia Eagles got back in the win column with an ugly comeback road win over the Indianapolis Colts. They’ll look to put together a more complete performance on Sunday Night Football against the Green Bay Packers.

Here are our five matchups to watch.

In Week 10, the Packers beat the Cowboys in a game that looked similar to the Eagles’ loss to the Commanders. The Packers wanted to run the ball effectively, thus (a) shortening the game and (b) making life easier on Aaron Rodgers and the passing game. Aaron Jones and A.J. Dillon combined for 37 carries for 203 yards and a touchdown in that game.

Jones is one of the best running backs in the NFL, as he has averaged 5.1 yards per carry over his six-year career. He can run inside and outside, he catches passes out of the backfield, and he’s good in pass protection. On the season, he is eighth in the NFL in rushing yards, as he has carried 143 times for 778 yards (5.4 YPC), despite playing in the worst Packers offense that we have seen in some time. He is slippery and creative, with outstanding vision.

Dillon, meanwhile, isn’t the most explosive back, but he’s a lumbering 6’0, 247-pound load who can drag tacklers, and he usually falls forward. His numbers are less impressive, as he has 117 carries for 467 yards (4.0 YPC).

The Eagles’ run defense was heavily scrutinized after a pair of shaky performances against the Texans and Commanders, but they bounced back against Jonathan Taylor and the Colts on Sunday. Still, it’s a pretty good bet that the Packers will lean on their run game against the Eagles, just as their last three opponents have.

The additions of DTs Linval Joseph and Ndamukong Suh were helpful in stopping the run last Sunday, as well as getting Fletcher Cox and Javon Hargrave more rest. Joseph was especially effective, as we showed on Tuesday. We’ll see if the Eagles’ defense can build on that positive performance against the run, but for now, it will be the matchup that is highlighted each week, even if kinda boring.

Lazard is Aaron Rodgers’ most targeted receiver, as he has 38 catches on 68 targets for 529 yards and 5 TDs. Lazard is not just a big possession receiver. He can make plays down the field, as evidenced by his 10 receptions of 20+ yards, with is tied for 11th best in the NFL.

While Lazard leads the team in targets, yards, and first downs, the Packers’ most dangerous receiver may very well be Watson, who struggled mightily early this season but is beginning to figure things out. Over his first six games, Watson had 14 catches for 88 yards and no TDs. Over his last two games, he had 8 catches for 155 yards and 5 TDs. He torched the Cowboys Week 10 on 4 catches for 107 yards and 3 TDs.

Watson has a special blend of size and athleticism.

When the Eagles are in man coverage, I suspect that Slay will be tasked with covering Watson, while Bradberry will check Lazard.

The other matchup that should be concerning for the Eagles is Josiah Scott against whoever the Packers decide to line up in the slot. That could be Randall Cobb (24 catches for 330 this season), or Lazard, who lines up inside frequently. The Commanders and Colts both had success attacking Scott in the slot with Avonte Maddox out.

The Packers’ offensive line has batted injuries all season long, and they have not been able to establish consistency and continuity, until recently. By my count, they have had six different starting offensive line combinations:

Nijman is the interesting player in the Packers’ current starting lineup. Because of poor play from Newman, the versatile Jenkins moved from his RT spot to LG, and Nijman has filled in at RT. The Packers feel that Nijman, an undrafted player in 2019, is one of their best five. The Packers seem to have finally found their best lineup.

Nijman started eight games in 2021 at LT, and seven so far this season at RT. He has length (6’7) and athleticism, but is short on experience. Perhaps Haason Reddick and Brandon Graham can take advantage.

On the other side of the line, Bakhtiari has bounced back after missing a ton of time rehabbing a serious knee injury, and is getting closer to the player he once was.

4) The Eagles’ rushing attack vs, the Packers’ run defense

The Eagles are good at running the ball, and they should be able to do that against the Packers, who can be soft at times right up the gut.

With Eric Stokes out, the Packers have adjusted by playing safety Darnell Savage in the slot, and Rudy Ford at safety. Savage is fast, but he’s small.

I think there should be opportunities for A.J. Brown to bully Savage in the middle of the field, or to run away from Rasul Douglas on the outside if the Eagles can create either of those matchups.