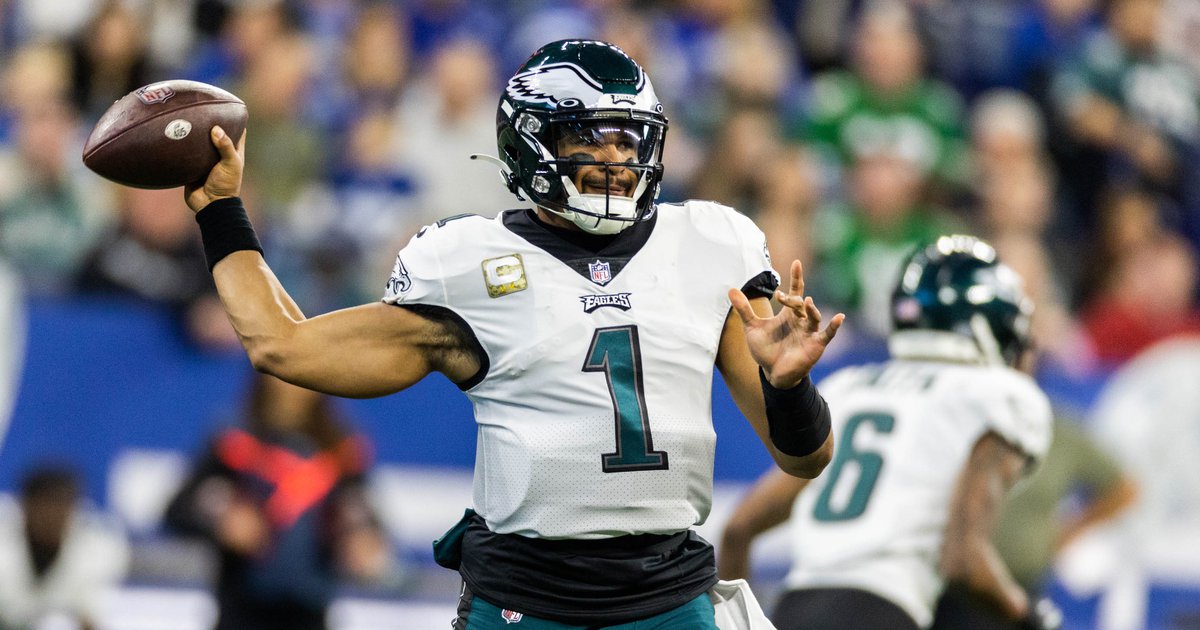 For the gambling enthusiasts, here are my Week 12 NFL picks. To note, the team logos indicate who I think will win the game, not cover the spread. At the end of the picks, I’ll note a few teams that I like based on the spread.

Bills (-9.5) at Lions: After starting 1-6, the Lions have won three straight games and are in position to climb back into wildcard contention in a weak NFC if they can beat, uh, the Bills. 😬

That’s probably not happening. The moral of the story here is, don’t start 1-6.

Also, this is usually where I complain every year about the Lions playing on Thanksgiving when they haven’t won a playoff game since the 1991 season. I’ve since come to accept it. Like this year, for example, I’m going to my girlfriend’s family’s house for Thanksgiving, and we’re leaving at 1 p.m., which will be during the Lions game. And I really couldn’t care less about missing it. The Lions game on Thanksgiving has essentially become the thing that’s on in the background while you actually spend time with family and loved ones. It’s fine. It works. If you put a game on during the early window that people actually care about, it’ll definitely lead to fights.

Giants at Cowboys (-10): The Giants are a little banged up.

Giants down both starting CBs, TE and 4 OL.

There’s no excuse for the Cowboys not to smash this team.

Patri*ts at Vikings (-2.5): In their six wins this season, the Patriots have held their opponents to 8.7 points per game. Among those wins, they have a shutout and two games in which they’ve allowed 3 points each. In their four losses, they have allowed 29.3 points per game. In my opinion, their strategy should allow a low number of points, which would give them a better chance of winning games. Boom. Someone tell Belichick.

Anyway, I guess the point here is that the Patri*ts have had their share of dominant defensive performances, and they are No. 1 in the NFL in defensive DVOA. You know who else is in the top four in defensive DVOA? The Cowboys (2nd), and the Eagles (4th), two teams that completely shut down the Vikings’ offense. Here are the teams the Vikings have played otherwise, and their defensive DVOA rankings:

The outlier there is the Bills, but it’s not as if Kirk Cousins played well in that game. Justin Jefferson just had one of the most insane wide receiver performances ever. So if we’re counting on Jefferson to be otherworldly from week to week, then sure, the Vikings can score a bunch of points against the Patri*ts and walk away with a win. I think it’s more likely that they’re just a somewhat above average team that has been able to do just enough against bad defenses for the better part of this season.

Buccaneers (-3.5) at Browns: The Buccaneers are starting to figure things out, while the Browns have lost six of their last seven games. They stink. Why is this line only 3.5 points?

Bengals (-3) at Titans: I love this grimy Titans team. You can look at their roster all day and pick out flaws, and ultimately it doesn’t matter because they play their asses off and compete like psychopaths for 60 minutes. The likely return of Ja’Marr Chase for the Bengals is concerning if you’re picking the Titans here, but it’s hard to pass up getting three points at home with this ultra-competitive team. And what the hell… give me the Titans to win outright while we’re at it.

Bears at Jets (-6): Justin Fields got hurt against the Falcons last week. He has a “separated shoulder with partially torn ligaments,” as Fields himself said it this week. He was also hampered by a gimpy hamstring in that game. He may very well play against if he gets an injection pregame, but even when Fields has been electric this season, the Bears defense has allowed opposing offenses to outscore them anyway. In his last six games, Fields has run for 640 yards. I can’t imagine he’ll be that same guy with a separated shoulder and a bum hammy.

The Jets, meanwhile, benched Zach Wilson this week and will start Mike White.

If I had more time to dissect all the variables in this matchup I’d maybe have a stronger opinion on it, but I’m writing this on Thanksgiving morning and I have to roll mini hotdogs with cheese in crescent rolls, so that’s not happening. Sorry. 🤷‍♂️

Falcons at Commanders (-4): The Commanders have won five of six and I’m going to ride them until (a) they falter or (b) they play another really good team. The Falcons certainly aren’t that.

Broncos (-2) at Panthers: I feel bad for the beat writers covering this game.

Ravens (-4) at Jaguars: The Ravens have won four straight after dropping that weird game to the Giants a while back. These are the kinds of games the Jags are a year or two away from winning.

Chargers (-3) at Cardinals: The Cardinals have been the “bad vibes team” since this summer, and that continued into their trip to Mexico City last week, when they fired their offensive line coach/run game coordinator for allegedly groping a woman.

Kyler Murray should return from injury in this game. Doesn’t matter. This team is a disaster.

Raiders at Seahawks (-3.5): The Raiders are 3-7 and have been very bad this season. The Seahawks are 6-4 and have looked good. Sometimes we just don’t need to overthink it.

Rams at Chiefs (-15.5): Has a Super Bowl champion ever been a 15.5-point underdog in any game the next season? That has to be a record, right? And it’s not even as if this Chiefs team is some kind of super-dominant juggernaut.

Saints at 49ers (-9.5): To begin, the 49ers are the much better team here, and they may be playing the best football in the NFC over the last three weeks or so, for whatever that’s worth. So give me them to win.

That aside, this is an interesting game from the perspective of the Eagles. If the 49ers lose, that’s helpful to the Eagles, since the Niners are arguably the worst matchup for them in the NFC, and if they somehow miss the playoffs, the Eagles should be very happy about that. If the Saints lose, the Eagles benefit because, you know, that first-round pick.

Packers at Eagles (-6.5): It was revealed this week that Aaron Rodgers has been playing the better part of this season with a broken thumb.

Aaron Rodgers confirmed today his right thumb has been broken since Week 5, when the injury happened on the last play in London.

Here he is talking about it for a bit. Surgery has never been a thought and it won’t be after the season, either, he said. pic.twitter.com/FbbMOkXYtc

That makes sense, as Rodgers has looked nothing like the MVP of the league that he was the last two seasons, and the Packers have gotten out to a 4-7 start. While I’m sure Rodgers will slather up his hand with horse paste and dance in the rain with the local shaman, that thumb isn’t likely going to get much better as the season continues.

Rodgers hasn’t been the only reason for the Packers’ struggles this season. They’ve been less dangerous through the air after trading Davonta Adams, their offensive line has had six different starting combinations, and their defense has underperformed. They’ll also be without their best pass rusher, Rashan Gary, and a starting CB in Eric Stokes.

Still, they have talent, and I imagine they’ll attempt to shorten the game by running it early and often, just as the Eagles’ last three opponents — the Texans, Commanders, and Colts — did as well, with varying success. The Packers are capable of playing “keep away” with the combination of Aaron Jones and A.J. Dillon out of the backfield. If they’re able to stay on schedule, convert short third downs, not turn it over, and hit on an occasional big play down the field, they can beat the Eagles.

Ultimately though, the Eagles are simply a much more talented team this season, and while I believe it will be another struggle, the Birds should get to 10-1.

Steelers at Colts (-2.5): I had the opportunity to take a very close look at these teams, since they were both on the Eagles’ schedule. In prepping for those matchups, I found that the Steelers were a lot worse than I was anticipating, and the Colts were a lot better. As such, give me the Colts, and I’ll lay the 2.5. #Analysis.

Teams on their bye week: None.