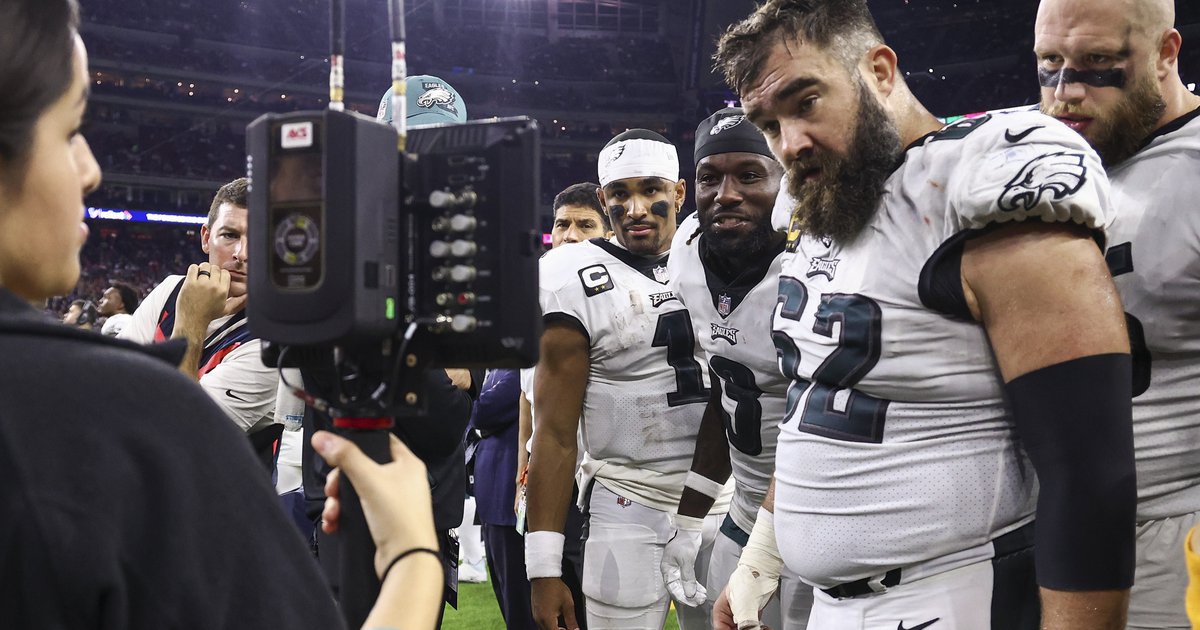 Are power rankings completely dumb and meaningless? Yes. Yes, they are. However, personally speaking, whenever I see them, I click. And now that I’ve sucked you in with promises of many power rankings, you’ll read it and like it.

Here’s where people have the Birds ranked after Week 9. Oh, and here’s our version of these sellout rankings, too.

The Philadelphia Eagles were founded in 1933. They are 8-0 for the first time ever. Turns out there can still be happiness after the demise of the Phillies. The Iggles continued their perfect start with an imperfect but ultimately satisfactory throttling of the Texans on Thursday Night Football. Keep an eye on the defense without Jordan Davis: The absence of the standout defensive tackle — parked on injured reserve with a high ankle sprain — was apparent as Houston running back Dameon Pierce regularly bullied his way to the second level in a 139-yard night. Suspect run defense might be the only perceptible flaw for the “new” best team in football.

#JimmySays: The Eagles’ two-score win over the Texans was one of their two worst performances of the season (the Cardinals’ being the other, in whatever order you prefer), and yet there was never really an “uh oh” feeling at any point.

It’s not just that the Eagles are undefeated. They haven’t really even come close to losing a game yet.

Brown has been a game-changer for the Eagles’ offense. He is just the third Eagle since the 1970 merger to record 700-plus receiving yards and six-plus touchdowns through eight games, joining Terrell Owens (2004, 2005) and Jeremy Maclin (2014). Brown’s ability to create separation, make contested catches and produce after the catch has been critical to quarterback Jalen Hurts’ ascension as a passer. Hurts has tossed six touchdowns with no interceptions for a QBR of 91.4 when targeting Brown, who ranks sixth in the NFL in receiving yards (718) and is tied for the second-most receiving touchdowns (6).

#JimmySays: I might go Lane Johnson. If we’re talking about most irreplaceable player, it’s Lane. But Brown is obviously a pretty safe choice as well.

Apologies to the die-hard Eagles fans still wanting to right the wrong of the Ryan Bates-for-Eli Harold trade in the summer of 2019, but you take the opportunity to add the best young defensive player in football when it retroactively comes along in an imaginary exercise. Because the Eagles are more active in the trade market than most teams, they have other options worth considering. Before the season, they might have been willing to reverse their 2018 draft-day trade that landed the Ravens Lamar Jackson, for instance, but there’s no need for that now with Jalen Hurts playing like an MVP front-runner.

#JimmySays: Bo did a thing where he reviewed all the trades every team in the league would like to recall if given the opportunity.

There’s been a small amount of quibbling from the fan base about missing out on Parsons, but the fact that there has been so little speaks to how well things are going for this team. (And also that DeVonta Smith is pretty likeable, even if not a player on the same level as Parsons.)

The undefeated Eagles are a runaway train in the NFC. Their odds to win the NFC have moved from +1100 before the season to +185 after Week 9’s Sunday games. According to SportsOddsHistory.com, no NFC team has had better than +200 odds to win the conference entering Week 10 since the Rams in 2018 (+125). They are the best team in football and have the easiest schedule remaining, according to ESPN’s Football Power Index. It’s Super Bowl or bust in Philly.

#JimmySays: The Eagles’ remaining opponents have a combined record of 39-37-1 (0.513). Even if one were to diminish the Giants’ misleading 6-2 record, I’m not sure how they can have the easiest schedule remaining in football.

The offseason acquisition of S C.J. Gardner-Johnson didn’t garner as much attention as those of WR A.J. Brown or CB James Bradberry, and understandably so. But Gardner-Johnson has become a valuable component of this secondary, picking off a pass in four consecutive games to give him a league-best total of five – which also doubled his career total after three seasons in New Orleans.

#JimmySays: Oh, I think the Gardner-Johnson trade received the proper attention it deserved. Eagles fans were certainly thrilled with it, Saints fans were not, and national analysts were puzzled by it. Maybe the Bradberry signing seemed to have gotten more attention because it happened during a dead period of the offseason? Eh, whatever. The overall point is well taken here that Gardner-Johnson is good.

Why are so many people impatiently waiting for an Eagles slump that might never come? It seems like every time an Eagles opponent gets a first down, certain corners of social media act like that’s a sign that the defense is a fraud and the Eagles are being propped up by a bad schedule. The Eagles are good. No, they didn’t blow out the Texans. But ask the Bills, and even the Chiefs, if wins over big underdogs are easy.

#JimmySays: I think that’s just fandom. “I don’t like that team/player/politician/etc., so I’m going to take any opportunity to crap on them no matter how idiotic or uninformed I might sound.”

They are clearly the best team in the NFL. It’s time they get their due for it instead of finding ways to pick them apart.

#JimmySays: Credit to Pete Prisco, actually, who has had the Eagles in the top spot for most of the season.

Average power ranking of the seven media outlets above