As a writer, as a fan, the Phillies’ World Series run meant everything 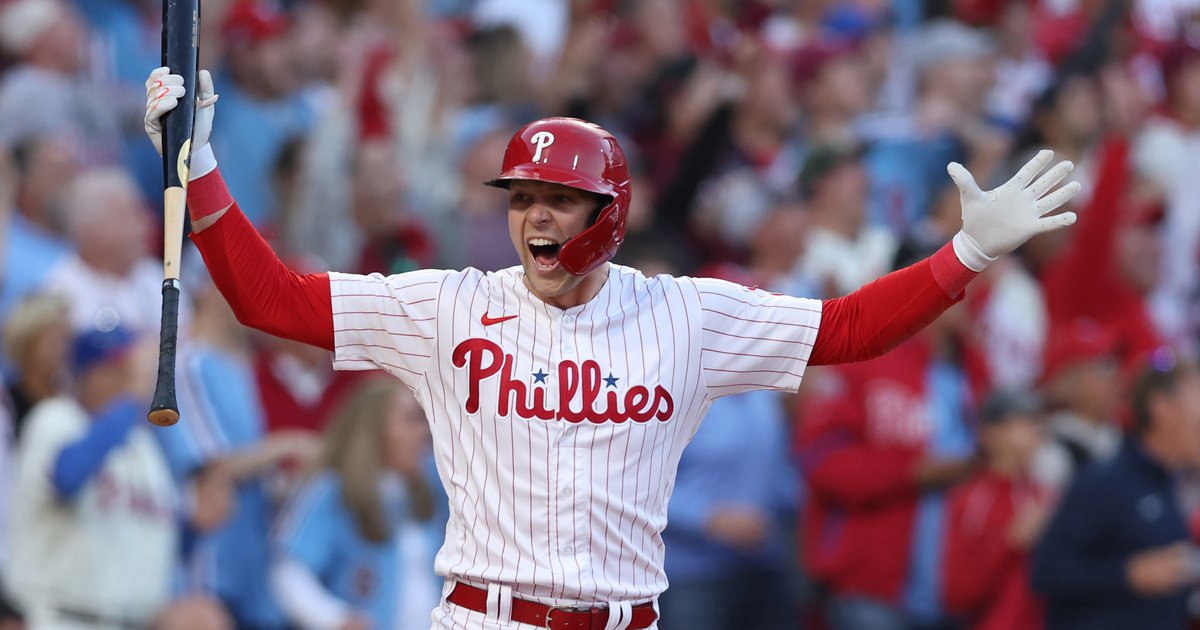 I have a strong aversion to talking about myself, or at least I’d like to think.

And definitely an even stronger one to including myself in any story I write.

But the Phillies were such a miraculous exception to everything in baseball this past month, that I think it’s okay to make one more here now that it’s over.

Originally, this was supposed to be a quick personal note on what the Phillies’ run meant to me to cap off the ‘What they’re saying’ news roundup that went up earlier Monday, but as I was going back through everything, I ended up writing…well…a lot.

But sharing experiences with one another of the good times (and yeah, even the bad too), where you were, who you were with, how you reacted when it all happened, that’s part of what makes sports great, why it brings people together the way it does.

So, if you can bear with my experience of the past month for a little bit…

Eight months ago when I started this job, I never expected any of this. I’m not sure there was any real way you could.

Go back to what the Philly sports landscape was in March:

• The Eagles were surprisingly okay, but it was a talking point EVERY SINGLE DAY over whether Jalen Hurts was even a half-decent quarterback, much less a good one. (Yeah, about that.)

• The Flyers completely bottomed out and were gearing up to trade away their best player in the past decade.

• The Sixers were still on the initial high from the James Harden trade, but everyone saw the cracks and knew deep down that if they ran into Miami or Boston in the playoffs, they weren’t going to survive, and they didn’t.

• And the Phillies, they were coming off a 2021 season where they stalled out again, the MLB lockout was still ongoing, and even after it ended and they went out and grabbed Kyle Schwarber and Nick Castellanos on the big-money deals, you still couldn’t be sure if they were playoff ready. The bullpen still looked bad and their fielding, on paper, looked like it was going to be atrocious.

The Eagles are off to their best start in franchise history, the Flyers, for now, actually look okay so far under John Tortorella, and the Sixers…well…they’ll figure it out, I’m sure…right?

But the Phillies…I’m still processing that all of this even happened. I’m sure my colleagues Evan Macy and Shamus Clancy are doing the same, and after two weeks of just going nonstop, getting some well-deserved rest too.

The opportunity to cover this postseason run was an absolute honor as a writer, but as a lifelong fan, I had a creeping concern the entire time that my job was going to take away any chance to truly enjoy it, especially after that final out was recorded in the NLCS and I saw exactly what the coverage plan was supposed to be for the World Series.

No lie, I was worried in the leadup to it and had points where I seriously wondered if sportswriting really was for me.

But I had the time of my life.

I got to attend a game every round as just a fan – from the NLDS all the way up to the World Series – made new connections with some incredible people and got to experience every amazing moment of this run with the incredible people I already knew.

Then I went home and wrote about it.

When Game 6 ended Saturday night, I wasn’t upset, I wasn’t angry, wasn’t depressed that the Phillies lost. I was just thankful. Thankful that they made it this far and helped create all these lifelong memories because they did.

Then I stayed up all night trying to figure out how to put it all into written word, because in the end, every second, good and bad, was just so worth it.

I’ll never forget walking into Citizens Bank Park for that first postseason home game in 11 years, seeing all the rally towels waving again, and the way the place erupted when Rhys Hoskins spiked his bat into the ground as the ball sailed into the outfield seats.

I’ll never forget buying Flyers tickets with a buddy the day of the NLDS clinching Game 4, but hanging out to watch and celebrate the Phils at a nearby bar the entire time. We still made it down to the Wells Fargo Center…to watch a whole 10 minutes of hockey.

I’ll never forget the night sky over the Bank in Game 4 of the NLCS, how everything felt elevated to an entirely different level, and how even though the Phillies fell into that early 4-0 hole, everyone just knew they were going to climb right out of it. And the two Manco & Manco pizzas I bought in Ashburn Alley. (One for care, one to share. A tough lesson learned earlier in the summer that’s a story for another day.)

I’ll never forget being in the parking lot as the rain fell right after it was announced Game 3 of the World Series was postponed, then my friend and I, still in Halloween costumes, returning the next night alongside 46,000 strong, me fighting to hold back tears once we got to our seats after I looked around and realized ‘Oh my God…this is really the World Series…we’re really here,’ then the party that just never stopped as the Phillies rang off five home runs, finding out my cousin was there too and catching Kyle Schwarber’s homer with him after I made my way down to his section.

I’ll never forget the pregame beers and the conversations had in the parking lot before each game my friends and I walked into, cheering so loud that I would lose my voice, and waving the towel so hard that my shoulder would hurt the next day.

I’ll never forget driving down to the ballpark on merch duty during my off days, spending loads of money at the team store to bring back shirts and hats for my whole family with each passing round, catching road playoff games outside the centerfield gate with the Phandemic Krew, and catching a couple innings with the Avengers (aka Harper’s Heroes) over top Ashburn Ally in the World Series after doing the same with them when it all began back on Opening Day.

And of course, all the late nights spent writing just trying to figure out how to perfectly put each game into perspective. That part will always stick too.

I’ll never forget how happy and through-the-roof excited everyone was the past few weeks, how happy I was, and, maybe somewhat embarrassingly, the uncontrollable scream I let out from my basement as the ball left Bryce Harper’s bat on “the swing of his life.“

I just hope that next time – hopefully, this time next year – Philadelphia’s the exact same way, only with a parade down Broad Street to send it all off.

Sunday afternoon, after all the writing was done, after I finally caught up on some desperately needed sleep, I sat on my couch, scrolled through my phone, and looked at all the photos taken from the past month, of the ballpark in full playoff mode, of my friends and I soaking it all in.

I smiled, teared up too.

The Phillies lost the World Series, and that part sucks. But the journey to it…That meant everything, and then I realized…

I wouldn’t change a damn thing.