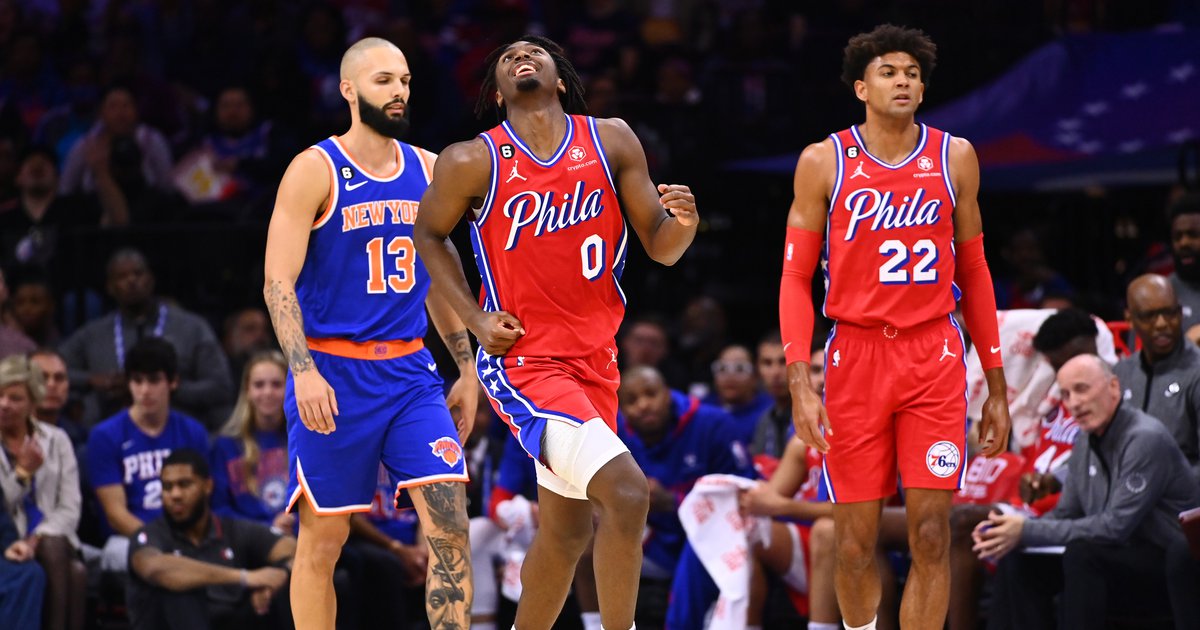 The Sixers fell short in a back-and-forth battle with the Knicks, losing 106-104 on an off shooting night for Tyrese Maxey.

• Down their two big-name stars, the Sixers had quite a different look about them in this one. Smaller and a bit more offensively challenged, they dug in on the defensive end and turned in one of their better halves of the season on that end, turning the Knicks over left and right to hang around in the game.

Julius Randle was a constant victim of Philadelphia’s pressure defense, turning the ball over five times in the first half alone. Randle got excited whenever he saw a matchup he thought he could bully in the post, but Randle often ended up on the losing side of those battles, with smaller Sixers players getting low to the ground and ripping his handle.

Nobody was more disruptive than Paul Reed. There were some ugly moments for Reed in this one that we’ll get to later, but his hands and activity were a major asset on defense, Reed picking up three steals in the first half alone. As always, you know exactly what you’re going to get when he is on the floor. He’s going to play hard, disrupt the opponent, and maybe put together a lowlight or two. Doc Rivers made an important change in the second half, subbing Reed in at the same time as Georges Niang, which helped protect one of their defensive weaknesses while capitalizing on his shooting ability.

(Another Reed aside: he had a nice finish through contact in the second half, using patience to wait out Julius Randle’s jump before scoring over him at the summit. He more than earned his minutes in this one after a tough start, and this will make his supporters even more vocal.)

If not for the fact that they turned the Knicks over 14 times in the first half, the Sixers likely would have been down big on their home floor. We don’t have to say they played well overall, but we can acknowledge their success on the end where they’ve struggled all season.

• A game like this threatens to give Tobias Harris a little too much room to operate on offense, with the headline stars on the sideline and a lot of guys looking toward Harris to lead. You would be within your rights to think that would lead to some stalled-out possessions in the mid-post and too many possessions where they forced Harris the rock.

To his credit, Harris struck a nice balance between the role he has played all year and the role we saw him play before James Harden joined the team last season. Catch-and-shoot jumpers still went up quickly, with Harris managing an efficient night from the outside, but he also bailed them out of some tough situations with work in isolation. Top that off with willing ball movement, and Harris was a great connective piece on offense, even if playing team-first ball didn’t always end with a made shot.

Unsurprisingly, it was Harris who was at the center of Philadelphia’s late-third run that gave them a lead they really shouldn’t have squandered. Working the Knicks in the middle of the floor and taking advantage of some aggressive helping off of the wings and corners, Harris kept himself rolling while finding open teammates and getting the rest of the group going.

I think something that gets taken for granted with Harris is that he is simply always available, everpresent on a team that has constant injuries and illnesses. It can be frustrating that he never offers more than you expect, but having a steady guy in the middle of a ton of chaos shouldn’t be taken for granted.

• Am I telling you both of Philadelphia’s backup bigs performed well on Friday night? Indeed I am. Montrezl Harrell’s contributions were basically all on the offensive end, and as has been the case for most of his career, basically all of his points were loud. When Harrell gets by you or finishes through contact, he makes sure to let the whole arena know that he just put two points on the board.

It’s hard not to have a bit of admiration for a guy who celebrates every bucket as if he just won the NBA Finals, and while his energy could certainly be used more on the defensive end, watching him dap up fans following an and-one finish in transition is pretty endearing. His big moments are going to be loud, I can tell you that.

• It would have been nice if Philadelphia’s defensive improvement didn’t come at the cost of their offense, which has been the far more effective unit through the first 10 games of the season. But when your All-NBA center and former MVP guard are both out of the lineup at the same time, it’s hard to make up for their talents with bench players and effort. You can try your way into better regular-season defense, but you can’t replace shotmaking, playmaking, and an overwhelming physical presence.

If we’re trying to look at this from a glass-half-full approach, Philadelphia did generally create good shots, ultimately failing from good positions. Short runners, open catch-and-shoot threes, and even layup attempts around the rim went awry. You don’t get any credit for missing good looks on the scoreboard, but for a creation-challenged group, I didn’t think they did a particularly bad job of finding shot opportunities.

I struggle to say the Sixers ran much of anything down the stretch in this one. While that’s partially a product of their offensive hubs being out, it’s not an excuse to have everybody standing around while hoping that one of Harris, Maxey, or Melton can create something.

• Something to make note of: Reed may have had a great defensive game, but Reed getting subbed in for PJ Tucker on a defensive possession with under two minutes left is quite a shocker. Tucker did not look like the happiest guy in the world on the bench, and on the ensuing possession, it was only natural that the man Reed was guarding hit a three over his outstretched arm.

Whether this ends up mattering or is ultimately shrugged off in the locker room is something we’ll only be able to tell over time.

• Regardless of how the locker room reacted, I can’t believe we got Harrell/Reed time in crunch time. What a time to be alive.

• Another related bullet point, but Tucker was not good in this one anyway.

• You saw in this game that giving De’Anthony Melton a bit too much creative freedom is not the best outcome for your basketball team, because you’re going to live with some curious shot attempts and bad turnovers. Melton’s inability to score inside the arc was the biggest problem because he made enough of his catch-and-shoot looks to keep the Knicks honest. To me, that comes down to Melton needing to do more self-creating compared to when Harden is in the lineup, where they’ve used him as a cutter, roller, and predominantly off-ball player.

• Tyrese Maxey had no problem getting shots up early in Friday night’s game, but he certainly had some problem getting them to go in the hoop. 5/14 at halftime, Maxey was struggling to find the touch on the angled shots off of the glass that he has used to score in traffic all season.

So what did he do when the second half began? He caught fire, naturally, and took the Sixers out of a medium-sized hole and put them on the see-saw with the Knicks. Before you realized it, he had 29 points, and as tends to happen whenever he gets on a roll, a sleepy crowd suddenly started turning up.

It really is remarkable how little Maxey needs to start building momentum. On Friday night, all it took was a matchup with Isaiah Hartenstein in space, which Maxey used to blow by him for a dunk. Before you knew it, he had hit a pull-up three, a midrange stepback, and a sidestep three above the break, creating a small frenzy at Wells Fargo Center with the mini barrage.

Unfortunately, Maxey would ultimately fail to sustain that momentum into the fourth and closing time, with the majority of his offense coming on flip shots off the glass that couldn’t find the bottom. In a physical second half, he was not up to the task with his touch evading him. Add on his defensive struggles on top of that — he was bullied by every bigger Knicks player he ended up on — and this was a game where he was far less valuable than his 31 points would suggest.

• Jalen Brunson is a very good player who can give good defenders problems, but I thought the Sixers made a meal of defending him at times in this one. It didn’t help that both members of their starting backcourt got in early foul trouble — Melton still tried to scrap with Brunson when he had the opportunity to defend him, but Maxey played matador defense on Brunson at times, making the Knicks guard look a hell of a lot faster than he is in a standard NBA game.

We don’t need to pick on Maxey to make the point, because he wasn’t the only guy to get left in the dust by Brunson, who would then put the Sixers in tough positions on their rotations. Matisse Thybulle is supposed to be an all-world defender, but you wouldn’t have known it from watching Brunson dust him in space.

• I don’t deny that Paul Reed has deserved an opportunity to play more minutes this year. Unfortunately, I can only assume Rivers will send him to Siberia for the next few months after some comical moments in the first half.

The one that won’t sit well is Reed’s tangle with Georges Niang on a defensive rebound, one that led to the Sixers fumbling away a possession they had no right to lose. It’s the second time Reed has battled with Niang and subsequently lost the ball this season, and on both occasions, Reed got an earful from Niang, who turned to scream at his teammate for derailing a possession.

When Rivers gets overly defensive about playing somebody over Reed, he has mentioned how he and his staff see more than everybody else, or that they take more into consideration than we would think. I would imagine moments like those stick out in Rivers’ mind, and certainly in the minds of his teammates, who might sometimes see a young guy who can’t get out of his own way.

(That said, the defensive contributions he made far outweigh that goof-up for me, just so we’re clear. I’m glad Rivers stuck with him, even if he did so to the point of comedy in the fourth.)

• Shake Milton managed to complain about a foul call on a possession where he might have fouled Jalen Brunson three different times, and then managed to pick up a tech on the ensuing possession after he scored, apparently still mad about the previous whistle. Advocating to the officials is one thing, but a role player should never give away a free point because of a play where he obviously fouled somebody. Inexcusable.

• Matisse Thybule is overrated defensively and consistently takes fouls when they absolutely can’t afford them in crunch time. He is one of the most disruptive guys at the league and a terror at his best, but we’ve seen this movie too many times to pretend he’s a reliable guy when it really counts.