World Series: Phillies go back to Houston with backs against the wall 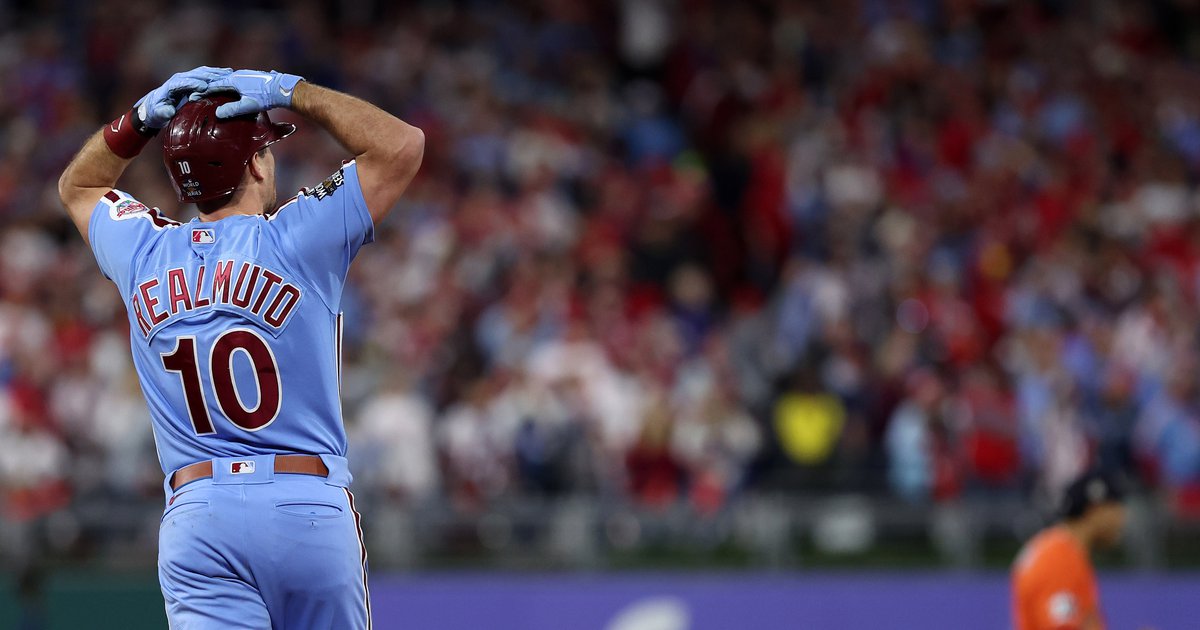 Jean Segura reached outside of the strike zone yet again, looping a single into right field to score Nick Castellanos from second.

The deficit was down to a run, with Bryson Stott standing at third and just one out recorded.

Go back two weeks and this is where the Phillies rally in front of 46,000-strong. But Thursday night, in a critical Game 5 of the World Series, there was nothing doing at the worst possible time.

Astros manager Dusty Baker pulled Rafael Montero and called on Ryan Pressly for a five-out save. With the Phillies needing any sort of ball in play to tie the game, Brandon Marsh struck out swinging on three pitches, then Kyle Schwarber ripped a missile of a ground ball down the first-base line that somehow didn’t rip through Trey Mancini’s glove.

The inning was over, and any momentum the Phillies had building was brought to a screeching halt. They went on to lose Game 5, 3-2, and trail in the series, 3-2, with the Cinderella run dangerously close to its last legs heading back to Houston.

The wild-card Phillies have already overcome and defied so much to get here, but now their backs are against the wall in a way they’ve yet to face.

They need two wins against a stacked club on the road. Lose once and it’s all over. How much magic is left?

“It is what it is, right? It’s not over,” Schwarber said postgame. “We still got another game to be played, so the biggest thing right now is – Sure, can you be frustrated? Absolutely – But we got a day to flush that away, and we gotta be able to come out ready to go for Game 6.”

Maybe if one extra swing goes the Phillies’ way, this is an entirely different story.

Game 5 was winnable. Despite going 1-for-7 with runners in scoring position and stranding 12 of them on base, there were multiple points where one hit would’ve changed everything.

One of the bigger missed opportunities came with two outs in the second. Astros starter Justin Verlander gave up a single to Segura then walked Marsh and Schwarber to load the bases. He escaped the jam with Rhys Hoskins striking out swinging. The veteran righthander locked in from there.

Even in the ninth, the Phillies had their chances. J.T. Realmuto probably has a double off the wall in right-center if not for West Chester’s own Chas McCormick making a spectacular catch, and Castellanos, though with two outs, had his shot at being the hero after Bryce Harper was hit by a pitch to put the tying run on. All he came up with was a groundout to short to end it.

“We just couldn’t find it,” manager Rob Thomson said. “You gotta get those guys earlier. Those are good pitchers. [Verlander’s] one of them. So we didn’t get it done.

“But that’s baseball. It’s the ebbs and flow of the game… Sometimes you go through times where you don’t hit with runners in scoring position and three days later, everybody’s getting hits. We just gotta keep battling.”

But they need to get their act together quick.

An increasingly big concern this series, even including the homer-filled Game 3, is that the Phillies haven’t hit with runners in scoring position at all.

Up until Segura’s RBI single in the eighth, the Phillies were in an 0-for-20 rut with runners in scoring position since Game 1, whereas in the previous series against the Braves and Padres, they made their money scoring any which way they could.

“I think the approach is the same that we’ve had, just come out the next day and go get ’em,” Thomson said. “Prepare, compete. These guys will show up, I guarantee it. They’re going to fight ’til the end, for sure.”

Another worry: The batters around Harper are struggling, so the Astros are making it a point to not give him anything hittable.

On Thursday night, Harper doubled in the fifth, but was otherwise walked twice and then hit by a pitch in the ninth. Hoskins, two spots in front of him, went 0-for-5 and struck out four times, Realmuto, batting third, also went 0-for-5 with three Ks, and Castellanos, behind the NLCS MVP in the fifth spot, went 0-for-4 with a walk.

They’ll be seeing Framber Valdez again in Game 6 on Saturday night after he carved them up for 6.1 innings in Game 2 while Thomson hands the ball back to Zack Wheeler in the hopes that he rebounds from his forgettable last outing.

There’s no room for error. The Phillies’ backs are against the wall. They have to go back on the road and win twice. Lose and the championship dreams are over. How much magic is left?

“No one said this was easy,” Schwarber said. “We’ve overcome a lot of things through the course of this year to be in the position that we’re at, and I think when we get there, you’re gonna see a really resilient club.

“We’re gonna play ’til the very end and we’re gonna see where it takes us.”