Handing out 10 awards from the Eagles-Texans game 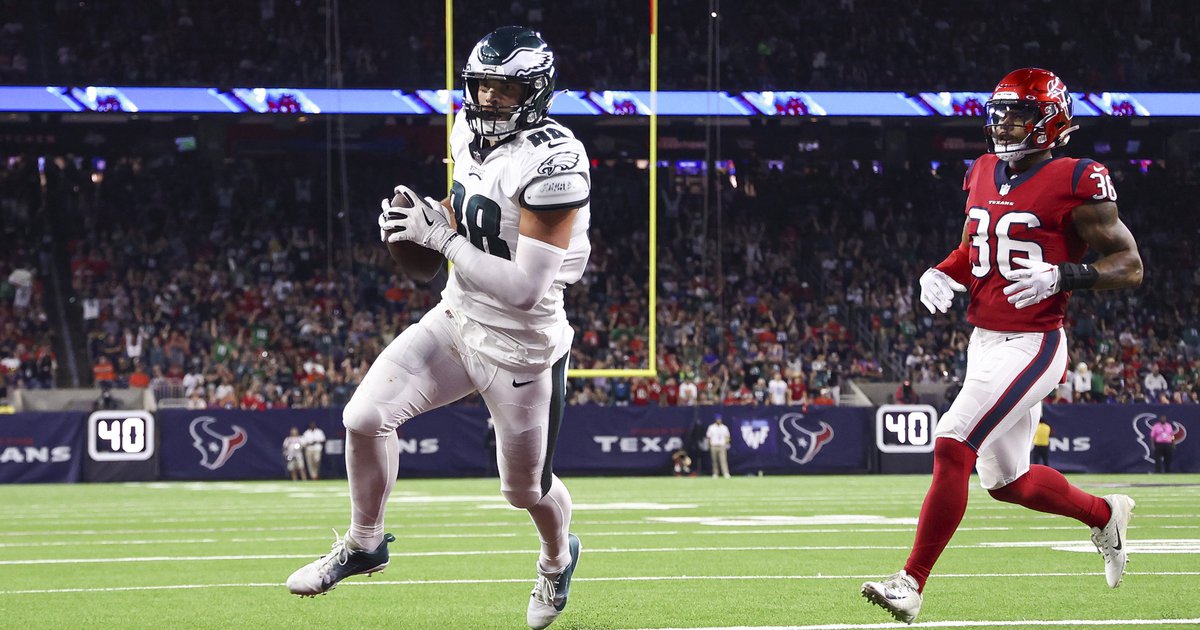 The Philadelphia Eagles are now 8-0, after they took care of business in Houston against the Texans on a short rest road game, 29-17. As always, win, lose, or tie, we hand out 10 awards.

This was probably the Eagles’ worst performance of the season and they still won by two scores, which goes to show how well they have played over the first two months.

The Texans’ roster is flat-out abysmal to begin with, and they were also missing six players due to injury (or personal reasons), including both of their starting receivers, Brandin Cooks and Nico Collins. Davis Mills, who isn’t exactly a household name, was throwing to guys like Teagan Quitoriano, Chris Moore, Tyron Johnson, and Jalen Camp.

But the Texans managed to hang around into the fourth quarter, with the Eagles finally going up by two scores after a Dallas Goedert TD catch with 11:22 left to play. They got the job done, but it was not the lopsided blowout many were expecting. The Eagles have done a good job getting up for each game this season, but it felt a little like they played down to their competition at times throughout the game. A lot of bad teams remain on their schedule, so they’ll try not to make that a theme.

2) The ‘Gashed’ Award 🔪: The Eagles’ run defense, without Jordan Davis

The biggest concern coming out of this game for the Eagles was their run defense, or perhaps more broadly, their tackling. Texans rookie running back Dameon Pierce ran 27 times for 139 yards, a career high, and a lot of damage was inflicted right up the middle, where the injured Jordan Davis usually resides.

The Texans also repeatedly worked the quick screen game to their receivers as sort of an extension of the run game. And really, that’s all they could do, seeing as they were fielding an offense full of guys who are probably better fits for the Saskatchewan Roughriders than an NFL team.

The Eagles are winning games and the defense isn’t allowing a lot of points, but their tackling is still very clearly something they’re going to have to clean up before the games that really matter.

Hargrave feasted on the Texans’ shaky interior offensive line, collecting three sacks on the night. He had one sack through his first six games of the season, but he has now had five in the last two. He can win with power:

Hargrave tends to be a streaky player, particularly when it comes to sacks, and right now he’s playing at a very high level.

Goedert caught 8 passes on 9 targets for 100 yards and a TD.

He has now caught 40 passes on 50 targets on the season, or a catch rate of 80 percent. He is now also averaging 10.4 yards per target, best in the NFL among tight ends. He is one of the most efficient players in the league.

Gardner-Johnson snagged his fifth pick of the season on Thursday night on a great catch.

That pick led to an A.J. Brown TD that put the Eagles ahead for good.

Gardner-Johnson now stands alone with the league lead in interceptions. My #analysis: The Saints were dumb for trading Chauncey Gardner-Johnson for basically nothing.

Brown had 4 catches for 59 yards and a TD. In his first five games as an Eagle, Brown only had one TD catch. He now has five TD catches in his last three games.

Mailata had a rough night trying to block Texans edge rusher Jerry Hughes, who was able to get the best of the big man with speed around the edge. Mailata is a brick wall against power rushers, but he’s susceptible at times to guys with speed. Mailata isn’t 100 percent healthy, and the Eagles are going to have to give him some help against speedier defenders.

He did fumble twice, though, which was new. Still, Hurts is generally making good decisions with the football, and his case for MVP consideration continues to grow.

9) The ‘It Looks Good In the Standings’ Award 🥇: Nick Sirianni

Sirianni seemed to realize that the Eagles didn’t play their best game, but noted that the shaky win is better than the alternative. Ultimately, the Eagles played a road game on a short week and came out of it with a win. And it was on a night when local fans were paying more attention to the Phillies, who played a World Series game opposite the Eagles, because the NFL and MLB couldn’t put their freaking heads together and come up with a better programming plan. (On a side note, Eagles players and media watched the final two innings in the locker room.)

The Eagles are now 8-0, the best start in franchise history. That’s a pretty notable accomplishment.

10) The ‘Two Game Deficit’ Award 🥈: The Cowboys and Giants

The Cowboys and Giants both have the bye Week 9, so they sat and watched as the Eagles extended their lead in the NFC East to two games on each team. FiveThirtyEight.com now has the Eagles as >99% likely to make the playoffs, 74% likely to win the NFC East (that feels low, honestly), and 69% to earn the 1 seed.

That’s all pretty remarkable after just eight games this season.

Next up: The Carson Wentz-less Commanders on Monday Night Football.