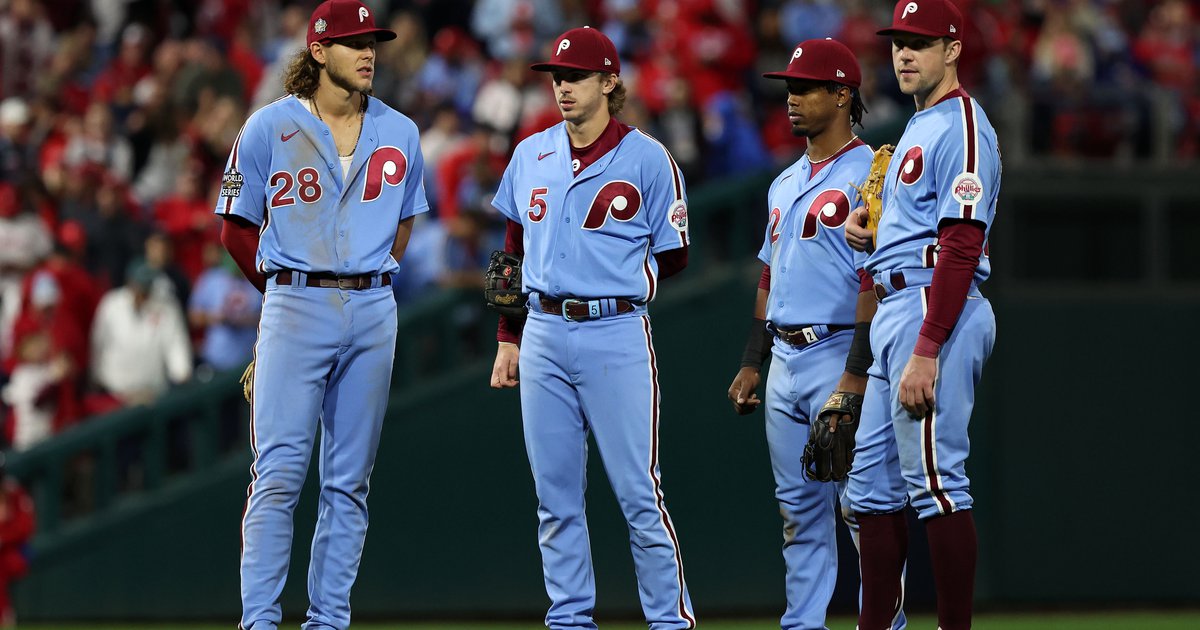 Of all the losses this postseason (and there have not been many), Game 5’s 3-2 loss to fall behind 3-2 in the World Series is probably the most painful.

A day after being no hit, the team came out with energy and showed the elite talent that got them to this place. But they hit the ball very hard, but not at the right times and not to the right spots. They stranded runner after runner after runner and wasted a pretty good effort in a “bullpen game,” and are now on the cusp of seeing their improbable championship hopes completely dashed.

Heading back to Houston on Saturday after a day off, the Phillies will need to win both games at Minute Maid Park to win their third world title.

Is there any chance they might pull it off? That’s a discussion for tomorrow. For now, let’s take a look at the good, the bad and the ugly from a heart-breaking World Series loss:

• The Phillies had no hits and no runs in Game 4 on Wednesday. Kyle Schwarber decided that was enough of that. He went deep just two pitches into the game to tie it at 1-apiece.

The entire quandary here heading into this game following the no-hitter was how this team would bounce back. Most teams — like, almost all of them — would probably have trouble not packing it in or feeling defeated. This Phillies squad is special and seems not to be familiar with any emotions of the sort. They seem to relish the unique and steep challenges they’ve had to face all season and postseason long.

• It was ballsy for Dusty Baker to send Jeremy Pena running in the first inning with a 1-0 lead already. The best catcher in baseball sniffed it out and Bryson Stott made a great tag to get the strike out-throw out double play. The Phils were in desperate need of momentum and the Astros needlessly aggressive decision handed it right back to Philly.

• Connor Brogdon had two fantastic shut down innings in the fourth and fifth. Those valuable outs allow the Phillies to preserve their best arms for the latter part of the game.

• The Phillies made a really impressive heads up play that saved a run and possibly their season as they caught Yuli Gurriel between third and home and were able to stick with it to retire him on a Jose Altuve grounder.

• We’ll highlight the defense one last time — with two on in the ninth and the Astros threatening insurance runs, Alec Bohm maneuvered a savvy double play to end the inning, calmly stepping on third base before firing the ball to first. It’s not a stretch to say that the Phillies might not be here if not for Bohm’s work at the hot corner with his glove this postseason.

• I have to give some major props to the Phillies organization for packing the stadium with star power — ranging from the first lady to Bruce Springsteen to Eagles players to former World Series champs. Even Meek Mill was on the field for this.

They’ve also thrown a perfect game all postseason long with their first pitch decisions. Every beloved star from the 2008 team was on the field at some point, reaching a climax with Brad Lidge throwing Game 5’s first toss to Carlos Ruiz. Win or lose, the memories this franchise has given its fans over the last few weeks should be the rejuvenation this franchise needs to start packing the stands in regular seasons to come.

• The last time the Phils wore the powder blue jerseys in the postseason was in 1983 against the Orioles. They wear them on home Thursdays — and this was a home Thursday. Shamus Clancy thanks you, whoever pulled the trigger on this decision.

• The Phillies were about two feet away from forcing extra innings. What an incredible catch by Chas McCormick.

• A line drive off the centerfield wall off the bat of Altuve wasn’t the optimal start for the Phillies. An error by Brandon Marsh trying to pick it up off the turf after a carom off the wall was even less optimal. With their leadoff man on third, Pena was able to drive him in seconds later with a weak single up the middle. And just like that it was 1-0.

• In their half of the second, the Phils’ patience against Justin Verlander and his shaky control almost paid off as a Jean Segura single was followed by back-to-back walks giving Rhys Hoskins a full plate of Phillies with two outs. Hoskins would strike out, chalking up the first missed opportunity of the night for Philadelphia’s offense.

The offense wasted a second two men on situation not long after, and unfortunately Verlander seemed to find his footing in the fourth and fifth innings leaving Phillies hitters off balance and wishing they had converted their earlier chances.

A Bryce Harper double with two gone in the fifth gave Nick Castellanos his chance to enter Philly sports heroism, but a 10-pitch at bat resulted in a pop up, letting Verlander exit the game with his slim lead intact.

Even against the bullpen Philly squandered its tries to score, wasting a Bohm single to open the sixth and walk thereafter.

This would be an appropriate time to drop in this nugget:

Phillies are 0 for their last 20 with RISP. Haven’t had a hit with runners in scoring position since Game 1.

• After stranding runner after runner after runner over the last few games, the Phillies had their backs against the wall, down two in the eighth with two on (both walks) and Jean Segura in the batter’s box. The second baseman wasted little time hitting a single to right to plate Castellanos. With Bryson Stott on third, Marsh failed to put the ball in play to give Stott a chance to score and Schwarber lined out to first on a very hard hit ball. It just wasn’t their night.

• The Phillies have gotten a lot of impressive innings from their bullpen this October, but in Game 5 Seranthony Dominguez just didn’t have it, leaving the eighth without retiring a batter and two men on. The Astros added an insurance run on an RBI groundout from Yordan Alverez, and their 3-1 lead heading to the bottom of that inning seemed insurmountable in the face of their struggles to score runs over the last two games.

• The hopes for Game 5 starter Noah Syndergaard were pretty low — just don’t massively screw things up — and he really didn’t in his three-plus innings of work. He handled the Astros talented batting order one time through before giving up a second run, a solo shot to Jeremy Pena that put Houston back on top. A long 18 outs for the Phillies bullpen remained ahead as well as a deficit. But Rob Thomson and company would probably have signed up for two runs and nine outs if they had to.

• It wouldn’t be a nationally televised event in Philadelphia without some yahoo running on the field.

Here’s the fan who just stopped the game by running on the field. Some balls on that guy. Cuffed right there in the outfield dirt in front of Kyle schwarber. pic.twitter.com/NL7lJFhEyl

• The crowd was never quieter this postseason than it was after Schwarber’s lineout in the eighth inning. It was eerie. 46,000 people wearing red making almost no sound at all as the game turned to the ninth inning. Philly fans live and die with their teams in spots like this. It’s almost a greater sign of respect for the team than the cheers are. Philadelphians feel these teams deep in their bones and it’s what makes this city the best sports town in America.