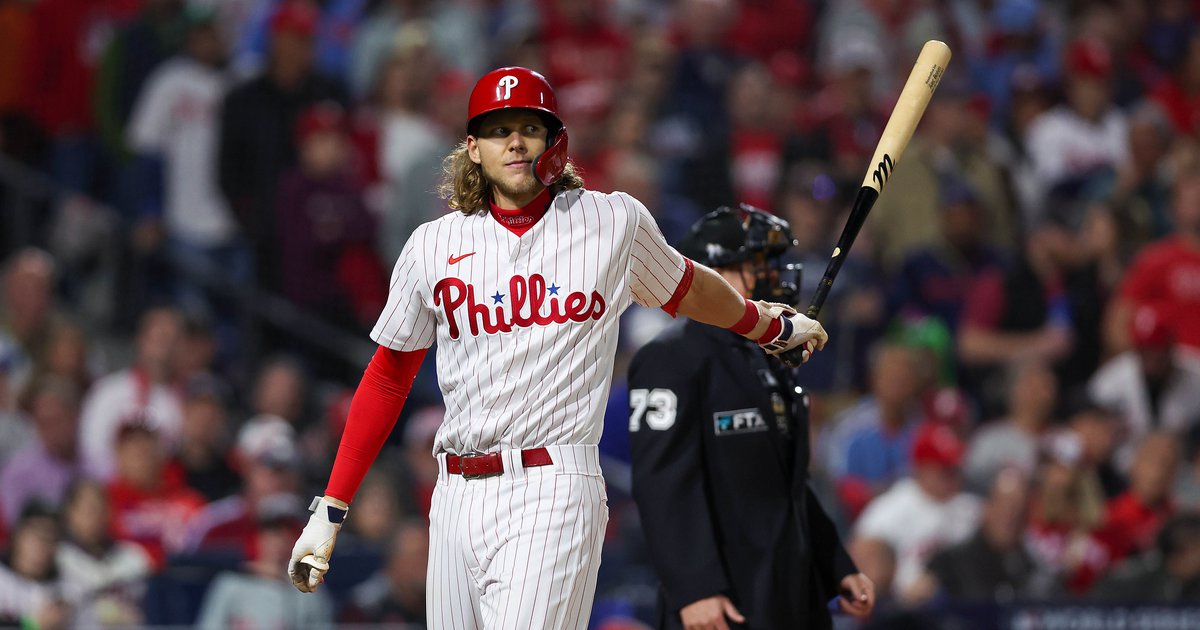 After the captivating highs of hitting five home runs and blanking the Astros in Game 3, it doesn’t get much lower than being no-hit a day later.

The World Series is now tied 2-2 and the team’s 5-0 loss was about as bad as it gets, as the Phils were held to a trio of walks on offense, and one bad inning on the mound undid all of the Phillies’ hard work to control the series prior.

Game 5 is back in South Philly on Thursday and we won’t waste more of your time as you try and erase this from your memory bank. Here’s a look at the good, bad and ugly from the fourth game of the 2022 World Series:

• It feels like this entire World Series so far has been alternating emotions for Phillies fans from being overly confident to overly alarmist. The correct place to be is probably somewhere in the middle. With the series tied at 2-2, the Phillies are now going to have to win two of three (with one of them being in Houston). Winning a world title at home is a pipe dream now, and the Phillies’ starting pitchers look completely and utterly out of gas.

So what is there to be optimistic about?

Rob Thomson knows how to manage. The Phillies hitters are much less gassed than the starting pitchers and they know how to score runs. It’s going to be a total grind these next few days, but the Phillies have not shied from any challenge and have shown they can beat the best teams in baseball. They are, in fact, among them.

• Kyle Tucker is a talented ballplayer. He’s also a smart one. In the second inning with no score, the Astros were looking for some kind of spark to quiet the rowdy Philly crowd. A double helped, but a delayed advance to third base on a groundout later in the inning was a savvy base-running move and gave Houston two chances to bring him in and take an early lead. However, Aaron Nola wasn’t having any of it. The Phillies starter wiggled out of the jam stranding a pair of runners on (he hit a batter) — and did it again in the fourth. He got a lot of swings and misses.

There’s not a ton more good to grasp at, as all of Nola’s tight rope walking was for naught as the Phillies would eventually allow a big inning to Houston and fall behind by five runs for the third time in four games.

• Dusty Baker elected to lift Cristian Javier with his no-hitter fully intact after six innings and 97 pitches — I guess that’s good? Obviously, it wound up not mattering as the ‘Stros loaded pen didn’t miss a beat in relief.

• It was chilly in South Philly to be sure, but Nola — sleeveless and all — had no issue ramping up the heat. While he wasn’t unhittable, he definitely had what we’ll call B- stuff Wednesday night. He was throwing the hell out of the ball, which is really interesting considering he has pitched a ridiculous amount of innings this year and looked a tad bit gassed in Game 1 in Houston:

Aaron Nola entered the 2022 postseason having thrown 16 pitches all season at 95.0+ mph

he’d thrown 35 such pitches this postseason entering tonight, and has another 6 tonight thru 3 IP (but none in the 3rd)

However he couldn’t get out of the fifth inning, surrendering three singles to give José Alvarado a bases-loaded, no-out jam to come into. Nola gave up seven hits over his four-plus innings and didn’t have very many stress free at-bats. The Phillies certainly hoped he would go deeper, but we knew Thomson was going to be aggressive with his pitchers after most of them had three days off.

• Hitting the first batter you face in the back with the bases loaded isn’t good. Giving up a two-run double a few hitters later is even worse. Alvarado came in to handle the Astros’ lefty sluggers and he didn’t handle them very well. The Phils’ top southpaw reliever retired just one of the first five hitters he faced. The Phillies fell behind 5-0 midway through this one with it looking like a long series could be ahead.

• Twice in the first three innings, with Javier dealing, a Phillies hitter worked a walk, stole second, and was stranded there. The lack of hits was obviously not good to see, but at least they were finding ways to put (a very small amount of) pressure on the Astros. We’ve mentioned all postseason long how they’ve squandered opportunities with RISP, but every team does and that is the nature of baseball. The Phillies have managed to get clutch hits when it counts, but the lack of production against Javier was certainly cause for concern.

• It was about as bad a day at the office for the offense as possible. The swings of fortune for this team are outrageous. They are setting World Series records with their bats one day and forgetting to even bring them to the ballpark the next.

Credit has to be due to the Astros’ staff. They are really the best pitchers in baseball and when the Phillies decide how to improve their roster in 2023, this should be a clear signal that they need to invest in a starting pitching staff that goes deeper than two. And, one that can handle the rigors of a long postseason.

This team was built to hit, and the pitching can do enough to win against good teams, but the Astros have a ton of depth both in the pen and among their starters. They are built to hang on for a long series and the Phillies are absolutely not. Philly has most of its big bats under contract for a long time to come. If they want to run this thing back, they need four pitchers who can go six innings in October.

• The 2022 Phillies will forever be the second team ever to be no-hit in the World Series. This Phillies team. The surprises never end.

• Just an observation about the fans at this World Series. I have been to a lot of really long baseball games over a condensed period of time. And I love it. But it’s a long time to be sitting in one place, so I’ve been taking a stroll around the ballpark each game, sometime around the fourth inning. In Houston, I was able to circumnavigate the stadium. In San Diego I was not — I think Petco Park is a little overrated. In Philly, as you all know, you can walk around the whole park.

I found something both impressive and eerie making my rounds during the World Series. While an inning is in action, there are no lines, for anything. Ashburn Alley is as much of a ghost town as it can be, with fans glued to the action and standing room only folks staking out their spots, fearing losing a vantage point. The engagement of fans all playoffs long has been incredible and is something to be proud of in the face of some repetitional issues amongst the national media.

• Of course after I write all that, you could hear a pin drop in the top of the fifth as the Astros were compiling their runs. It was the exact contrast to the ear-damaging cheers in Game 3. And it was pretty quiet and uneventful from there until the end.