World Series: Five reasons the Phillies will benefit from an extra day off 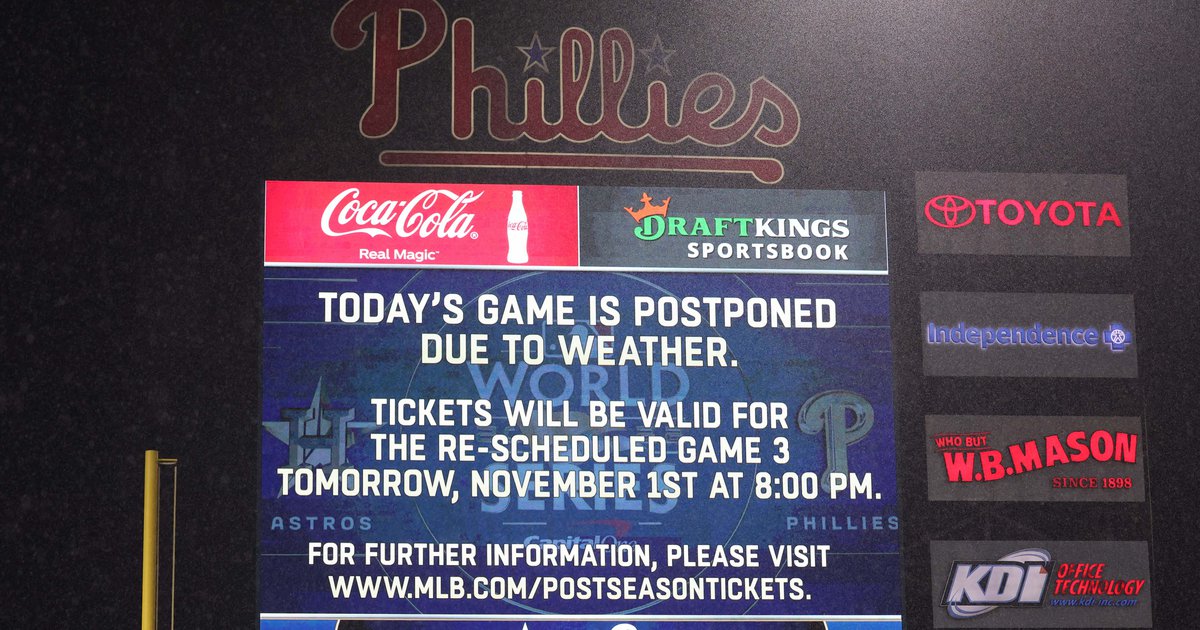 The Phillies and Astros will wait another day to resume the World Series, with Game 3 set to start Tuesday night at 8 p.m. in South Philly after a rainout on Monday.

And while thousands were inconvenienced by driving to the ballpark and making plans ahead of a decision that MLB took until 6:45 to make, the bigger beneficiaries of the one-day delay are the Phillies.

Here are five reasons why Game 3 moving to Tuesday — with Games 4 and 5 to follow on Wednesday and Thursday — are good for Philadelphia:

The Phillies get to avoid a Noah Syndergaard-led bullpen game in their home World Series debut, and the extra day of rest helps them get their rotation in line a little better (particularly after manager Rob Thomson used Ranger Suárez in Game 1, messing with his availability).

Wheeler Game 6 on Sat. He gets extra day

The Astros have a much deeper rotation, deeper than five pitchers even, and we wrote about how it was a major advantage for Houston in this series. But all of this will be totally null and void if Aaron Nola and Zack Wheeler pitch like they did in their first WS starts respectively.

Again, the Astros have a far better bullpen — the best in baseball — than the Phillies do, and any extra rest for the top arms in the Philadelphia pen like Seranthony Domínguez, José Alvarado and Zach Eflin will certainly benefit the team. Giving Thomson a full menu of options for Game 3 increases the Phillies’ chances of winning that game and taking the series lead Tuesday could determine the fate of this entire championship.

Why precisely is this the case? It’s hard to say. The Phillies would have had a day off before this game anyway, of course, but they did have a little bit of a layoff (at least three days) between two of the series they won this postseason and they won those respective games.

The Phillies really shocked the Astros in Game 1 on Friday. I was in the building. That J.T. Realmuto home run in the 10th inning handed Houston its first loss of the playoffs and made the team think more seriously about the underdog Phillies.

In Game 2 it was pretty much Houston domination, and the fans were much louder and into it than they were after the incredible 5-run comeback the night before. The Astros were riding high and perhaps a second day without baseball will slow down their forward momentum. It’s also possible that the rowdy Phillies fans would have done that anyway. Expect madness at the ballpark on Tuesday.

This one is selfish, but I was hesitant to go to the ballpark to cover the game due to the weather and, frankly, some exhaustion from traveling home from Houston on Sunday. But with the game postponed, I got to trick or treat with my 16-month old for the first time — and it was such an unexpected treat.

Fans have an extra day to recoup from a wild Philly sports weekend and perhaps enjoy Halloween more thoroughly than they might have otherwise. That’s sort of a win, right?

Also — a note to fans who went down there Monday — keep your parking receipt to get back in on Tuesday.