Handing out 10 awards from the Eagles-Steelers game 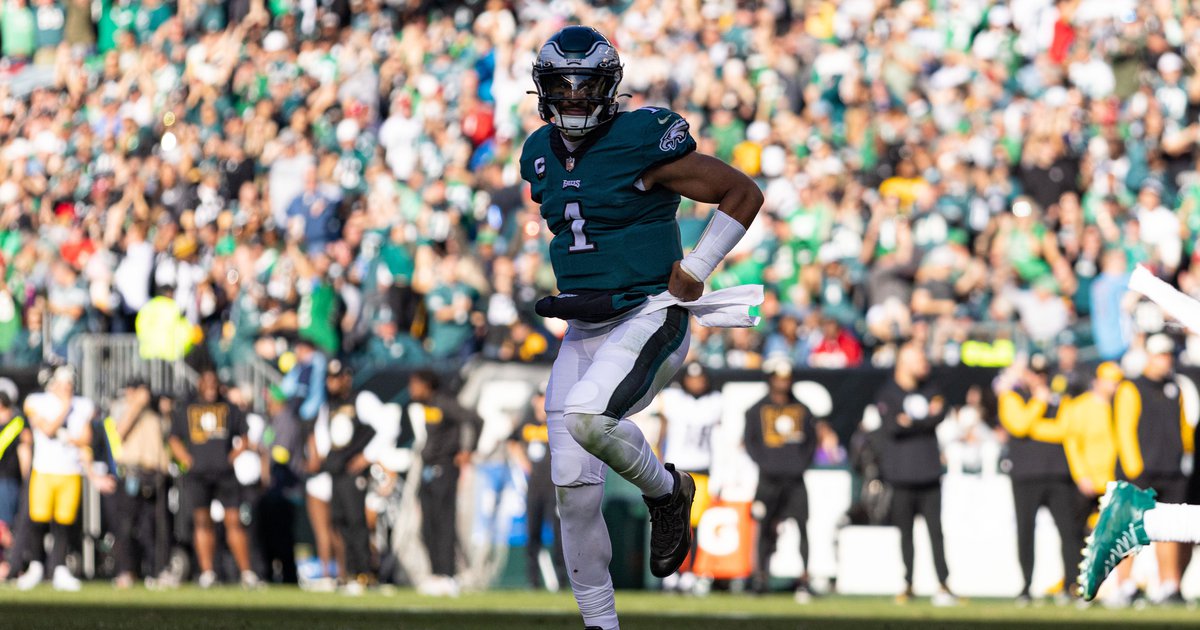 The Philadelphia Eagles are now 7-0 after they cruised to victory over the overmatched Pittsburgh Steelers. As always, win, lose, or tie, we hand out 10 awards.

Brown had 5 catches for 113 yards and 3 TDs in the first half. He finished with 6 catches for 156 yards. His first TD showcased his blend of ball tracking, ball skills, and contested catch ability.

Brown is a player who can simply run down the field and make plays, which is a great thing to have if your offense in struggling (not that it was in any way today). Can’t get anything going? Just chuck it up to No. 11.

Hurts finished with 19 of 28 passing for 285 yards, 4 TDs, and 0 INTs. He threw two absolute dimes down the sideline to Brown.

Brown told the corner that he was too small after that TD.

After a handful in games in which the Eagles were attacking horizontally instead of vertically, Hurts got back to attacking down the field, and it looked pretty on Sunday.

There were zero Philadelphia Eagles players listed with an injury designation heading into this matchup, but it looked like the Birds might have suffered a serious injury to Davis, who was carted off with an ankle injury. Davis was on crutches in a walking boot after the game.

As it turns out, Davis will return at some point this season, if this reporting by Ian Rapoport of NFL Network is accurate:

#Eagles first-round DT Jordan Davis is believed to have suffered a high-ankle sprain based on the initial exam, source said. Those are generally 4-6 week injuries, but he’ll have an MRI to determine his time frame.

Davis doesn’t have eye-popping stats to start the season (12 tackles, 1 batted pass in 6 games), but he has been effective clogging up holes in the run game, playing almost solely in odd-man fronts as a nose tackle. Against the Steelers, he started seeing an expanded role playing in even-man fronts, aligning as a three-technique.

It appears he may have dodged a bullet.

Javon Hargrave had 2 sacks, while Haason Reddick, Milton Williams, Marlon Tuipulotu, and Chauncey Gardner-Johnson each had one. That would make six sacks. #Math.

The Eagles now have 23 sacks on the season. They had 29 all of last season.

Sacks come in bunches, as they say. More accurately, they tend to come in bunches against bad offensive lines, which is what the Eagles faced today. Credit them for taking advantage.

5) The ‘Give Me That’ Award: The Eagles turnover differential

If you’re an optimist, then you’re probably thinking, “Yaaaaayyy, turnovers!” If you’re a pessimist, you’re worried about what might happen if the Eagles lose the turnover battle eventually.

There’s some element to luck with turnovers, but it’s also a result of good ball security on offense, and causing disruption on defense. For the most part, the Eagles have earned their turnover differential.

The Eagles had some more shaky moments on special teams on Sunday. They allowed the Steelers to convert on a fake punt, a couple of games after the Cardinals converted one on them. They also had a weird penalty on a field goal attempt in which Brandon Graham was called for causing an offensive lineman to false start.

On the plus side, Zech McPhearson made a phenomenal play to keep the ball out of the end zone on punt, pinning the Steelers at their own 1-yard line. So it wasn’t all bad.

Still, it’s the one phase of the game the Eagles have generally had more notable negative plays than positive ones.

Sanders had a very good game regardless, as he ran 9 times for 78 yards and a TD.

8) The ‘Get Some Rest’ Award 🛌: The Eagles’ offensive starters

For a team that has had big leads in pretty much every game so far in 2022, Sunday was the first time this season that Nick Sirianni was able to pull his starters. Hurts, Sanders, Brown, DeVonta Smith, Dallas Goedert, Jordan Mailata, Jason Kelce, Isaac Seumalo, and Lane Johnson all got some extra rest in the fourth quarter.

That could help them some on the short week in advance of their Thursday night matchup against the Houston Texans.

The Eagles have four road games on short rest this season:

Thankfully for the Eagles, their Thursday road game comes against a bad Texans team. The early look-ahead line in that matchup is Eagles (-9).

The bright side is that they will then have a mini-bye to prepare for a divisional matchup against the Commanders.

It’s not often that the Eagles are the sports sideshow in Philadelphia, but they are right now, with the Phillies in the World Series. It’s also kind of wild that it’s happening at a time when the Eagles are undefeated, at 7-0. There were Phillies jerseys all over the Eagles’ locker room after the game, as the Eagles as an organization have thrown their support behind the surprise National League Champs.

Jason Kelce concludes his media scrum sharing some of his Sunday night plans that some Eagles fans might be able to relate to: “Alright! I’m going to go drink some beers now.” pic.twitter.com/BkykPTynAx