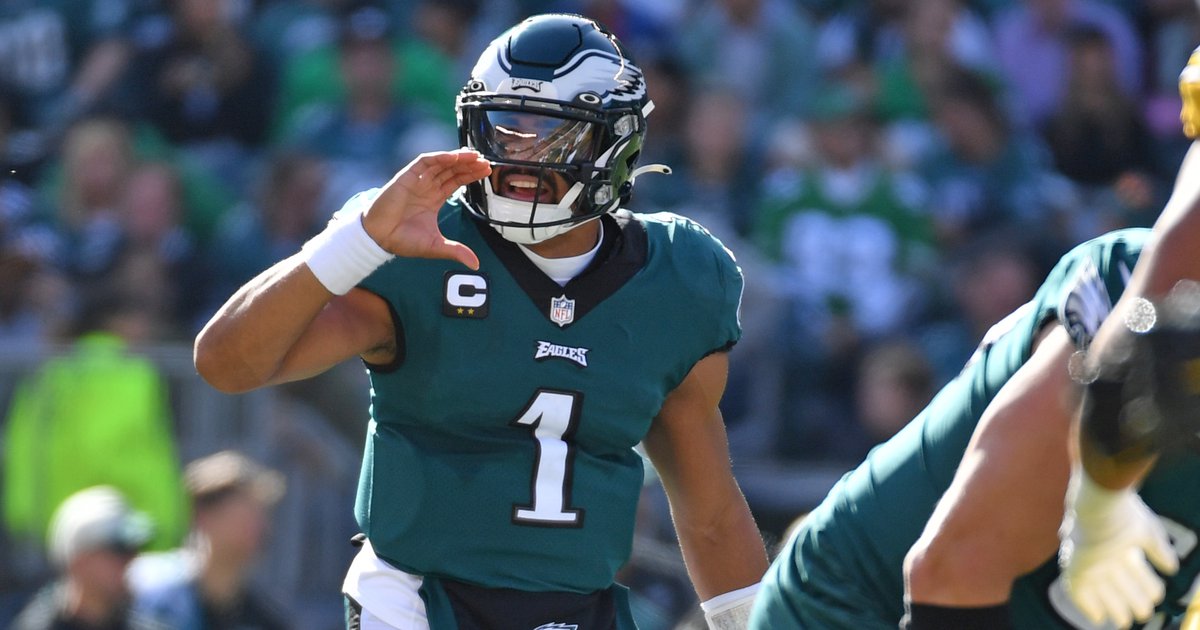 The Eagles moved to 7-0 with a comprehensive beatdown of the Steelers, with A.J. Brown’s three-touchdown day the highlight of a 35-13 Philadelphia victory.

• Coming out of halftime flat has been one of Philadelphia’s only glaring issues for the Eagles this season, one of the only reasons anyone might doubt their credentials as a real-deal contender. With additional time to reflect and self-scout coming out of the bye, the Eagles did well to leave those issues in the past against Pittsburgh.

The opening series of the second half was a beauty, blending the ground game that had been absent in the first half with the passing attack that just continued to roll after a monster start. In some cases, this just felt like a better team out-executing the opponent even when they knew what was coming — a running play was all but telegraphed early in Philadelphia’s drive, and Miles Sanders ran it up the middle for 20+ anyway, leaving Steelers defenders in his wake.

After A.J. Brown dominated touches and touchdowns in the first half, I suppose it was time for somebody else to share the spotlight. To give Jalen Hurts his first game with four passing touchdowns in the NFL, it was Zach Pascal who broke free early in the third quarter, breaking into the second level untouched and squeezing by the last defender for a score down the sideline. Not a bad way to score your first TD of the season:

Red zone efficiency tends to be a measuring stick stat for NFL teams, but the Eagles didn’t even need to get into the red zone to score their first four touchdowns of Sunday’s win. This was a dominant offensive showing, one that featured a great performance from the QB and elite playmaking on the outside.

• To that end, even though we are seven wins deep into Philadelphia’s still-undefeated campaign, Hurts’ step forward this year still feels sort of hard to believe. The additions to the roster have made a massive difference, Brown especially, as any QB would be thrilled to line up with this group of weapons every week. But having the supporting cast would mean little with a quarterback afraid to give his playmakers chances to show off their talent. To me, the Eagles have been defined by this fact on offense — they are a team capable of explosive plays early and often, but those plays rarely mean they’re inviting much additional risk of a turnover.

Normally, you have to accept some added downside in order to chase big plays downfield. But as a result of having a couple of high-level playmakers on the outside, Hurts has consistently been able to target Brown and DeVonta Smith downfield in single coverage, knowing that his guy is favored to win the battle more often than not. His throws in those situations, mind you, have rarely fallen into territory where it feels like the other team even has a chance to turn the Eagles over. Either his guy is going up and making a play, or the Eagles are going to live to fight another day.

The same appears to be true on the ground, where Hurts is both a huge threat with his legs and a relatively safe commodity as far as mobile quarterbacks go. It helps that he’s able to shrug off hits easier than more wiry runners, but Hurts often avoids taking them in the first place, picking up his positive yards and then sliding or getting out of bounds before the real danger comes. He has also done a great job of simply protecting the football, not losing sight of how important it is to maintain an edge in the turnover battle.

Philadelphia has had safety without sacrificing explosion, and that’s powerful.

• Let’s just make sure we include this here — A.J. Brown has been even better than advertised, and as we theorized as early as the first game, his play and the attention he draws have been enough to lift up this entire group through the air. When he’s not the guy scoring and carving up the opponent, as he did on Sunday, he’s dragging defenders toward his area of the field and making life easy for everybody. Guy is a hell of a player showing no signs of slowing down as we move deeper into the year. Hard to believe the Titans let him go.

• Do you guys remember the start of the season, when the pass rush was basically nonexistent to the chagrin of fans and observers everywhere? That feels like such a distant memory at this point, because the front seven is not just getting home to the quarterback, they’re creating turnovers with the pressure they’re getting on signal-callers.

There were contributions from a number of the boys up front on Sunday afternoon, with Milton Williams, Haason Reddick, and Brandon Graham all doing excellent work in the trenches. But it was Javon Hargrave eventually delivering the play that got Philadelphia a takeaway, the former Steelers lineman stripping Kenny Pickett to create the first turnover of the day.

Hargrave was the man who ultimately made the play, but that strip sack is a great example of how turnovers are so often the work of a group of guys getting it done. Without Reddick bearing down on Pickett and nearly bringing him down himself, Hargrave never has that chance to strike. Following his own ice-cold start to the year, Reddick has been as good as advertised, making a consistent impact with his pass-rushing ability.

It took all of two plays for the Eagles to capitalize on that turnover and put this game to bed. A.J. Brown looked to be on his way to touchdown No. 4 on the opening play of the ensuing drive, but the Steelers eventually hauling him down around the 10-yard line as he ran out of juice. No worries, of course. On their first red-zone touch of the day, Miles Sanders waltzed around the left side of the line for a score of his own, putting the cherry on top of what was a dominant offensive outing for the Birds.

Philadelphia has been way out in front in the turnover battle all year, and they have pretty consistently made those takeaways count. Making the most of turnovers often separates the good teams from the truly elite units, and when the Eagles had their first crack at it on Sunday, they wasted almost no time finding the end zone. Favorable schedule or not, this group is taking care of business with ruthless efficiency.

• Gardner Minshew getting extended fourth quarter time says all you need to about this performance. Jason Kelce wearing a Batman mask on the sideline with eight minutes left in the game speaks volumes about how good they were. This game was not in doubt, and the Eagles got to protect their top guys thanks to the comfortable lead they built for themselves heading into the stretch. Few better feelings than putting together a win that dominant.

• Ho hum, another turnover for the Eagles to end this game, no big deal:

CJ Gardner-Johnson’s interception pushed the Eagles into pretty insane territory — at the moment he hauled that in, the Eagles had more takeaways than touchdowns on the season by a 16-15 margin. For as much grief as Jonathan Gannon has taken at times (sometimes rightfully so), he has shaped this group into a hell of a unit. The offense tends to get the headlines, but the defense has given Philadelphia a high floor even when Hurts and Co. take a while to get rolling. You don’t stomp bad teams with one-way performances. This group is complete.

• The Eagles got caught off guard quite a bit on misdirection plays on Sunday, including on the touchdown Chase Claypool threw in the first half. Credit to the Steelers for their execution on said plays, as they clearly disguised the plays pretty well, but this group didn’t do a great job of staying home. Something to keep an eye on moving forward, though Pittsburgh does have a deeper cast of wideouts to use on those plays than most teams will.

• Penalties were ultimately Philadelphia’s biggest problem in this game, and I’m not particularly inclined to hammer them for it, as they haven’t been a defining issue the way they were in years past. This officiating crew was clearly calling it tight throughout the day — how many times do you think an illegal formation on a kickoff and a defensive delay of game were called during the same four quarters? Sometimes, you just have to accept that the yellow laundry is going to get tossed around more often on a given day.

That said, you do have to adjust to that with your play, and the Eagles ended up getting caught with their hand in the cookie jar too often. James Bradberry has been excellent this year and had some great moments on Sunday, but he picked up some cheapies that gave the Steelers valuable yards and first downs when they otherwise looked out of answers.

• Jake Elliott aside, the special teams mostly stink for the Eagles. They’ve now given up first downs on fake punts in two of the last three games, their punter is mediocre at best, and their return game is nonexistent. But other than that, Mrs. Lincoln, how was the play?

(Zech McPhearson made a heck of a play to pin Pittsburgh deep in the third quarter, which deserves a shout out as a moment that stands out from the slop the unit has given Philly most of the season.)

• Hoping for good news for Jordan Davis on the injury front, but he’s the biggest concern coming out of this game for the Eagles. Davis is a big-time run-stopper and has been growing into his role as the season wears on, and it would be a shame for the Eagles to lose a productive player and for Davis to lose valuable rookie season reps. Fingers crossed.