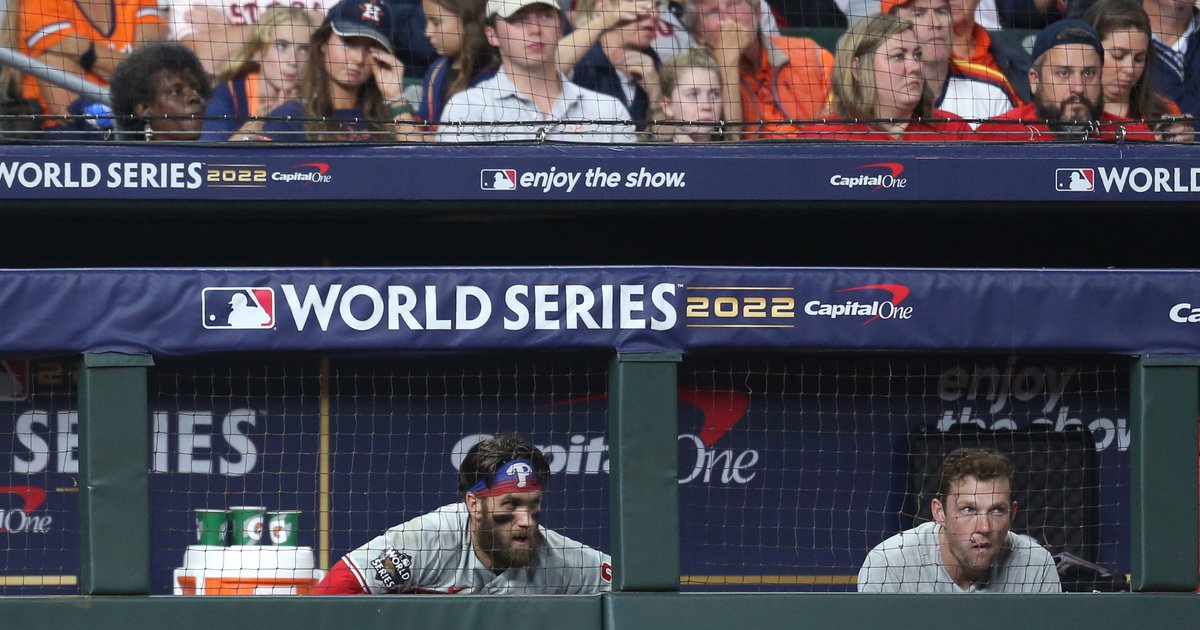 There was no magic Saturday night, no comeback.

The Phillies’ bats were kept silent by Framber Valdez for six innings, they managed just two runs on a sac fly in the seventh and a fielding error in the ninth, and will come back to Philadelphia with the World Series split at one apiece following a 5-2 loss in Game 2.

You can say the Phillies got what they were after down in Houston: A series split coming back to what will no doubt be an absolutely wild Citizens Bank Park for three games beginning Monday night, just like they did against the Braves in the NLDS and then the Padres in the NLCS.

But just like in those last two series, it’s not hard to feel like the wind got taken out of their sails a bit, especially after pulling off that huge comeback in Game 1.

But then again, they’ve been here before.

“Obviously we want to be going home 2-0,” rightfielder Nick Castellanos said postgame. “But s***, I’ll take the split. Now we got three at home to take care of business.”

If they’re going to, they’ll need the big names at the top of the lineup to bounce back quickly.

Kyle Schwarber had two near misses on what could’ve been a two-run shot to kickstart a rally in the top of the eighth. The first fly ball, after review, sailed foul, and the second, on a pitch in the exact same corner of the strike zone, fell short at the right field wall and into Kyle Tucker’s glove. He finished the night 1-3 with a walk.

Rhys Hoskins went 1-3 and struck out twice, J.T. Realmuto – the 10th inning hero from Game 1 – was 1-4 with 2 Ks, and Castellanos went 1-4 with two strikeouts but had one of the Phillies’ two doubles and runs scored on the night.

NLCS MVP Bryce Harper, who has been on a complete tear through the postseason, went 0-4, going hitless for the first time in 11 playoff games.

Valdez, on his own tear but haunted by brutal World Series starts from last season, had his best stuff going on Saturday night as he punched out nine Phillies and was left responsible for only a single run when he exited after 6.1 innings. But by that point, the Astros had already put up their five after attacking Zack Wheeler early in an uneasily off night for the Phils’ ace.

“He was tough,” Harper said of Valdez. “He’s got that good sinker that he throws and that good cutter and slider that he throws as well. He kept us off balance pretty well tonight. We had some opportunities, especially myself, to get something going, but weren’t able to do that.”

As a whole, the Phillies went 0-for-7 with runners in scoring position. They had a leadoff baserunner in each of the fifth through eighth innings, but only managed to bring only Castellanos home in the seventh via his own double, a ground out by Alec Bohm, and a sac fly to left by Jean Segura.

Valdez walked Schwarber to open the sixth, then gave up a base hit to Hoskins to put two on with no outs. But Realmuto struck out swinging in the next at-bat, then Harper grounded into a double play.

And besides, they’ve been here before.

The Phillies will fly back home to Philadelphia with Sunday off, then play in front of a home crowd that has only gotten louder as the month has gone on, in a ballpark where they have taken control of every series.

Coming off a 3-0 shutout down in Atlanta in Game 2 of the NLDS, the Phillies came home for a playoff game for the first time in 11 years and went on a nine-run outburst marked by Rhys Hoskins’ three-run homer and cathartic bat spike. They clinched the series the next day.

Then in the NLCS, after blowing an early 4-0 lead to lose Game 2 against the Padres out in San Diego, Ranger Suárez and Jean Segura rose to the occasion in Game 3 to open up the floodgates for the next two on the way to the pennant.

With Noah Syndergaard set to start Game 3 on Monday and Suárez Game 4 on Tuesday, it’ll especially be on Harper and co. in the top half of the order to step up again.

But hey, they’ve been here before.