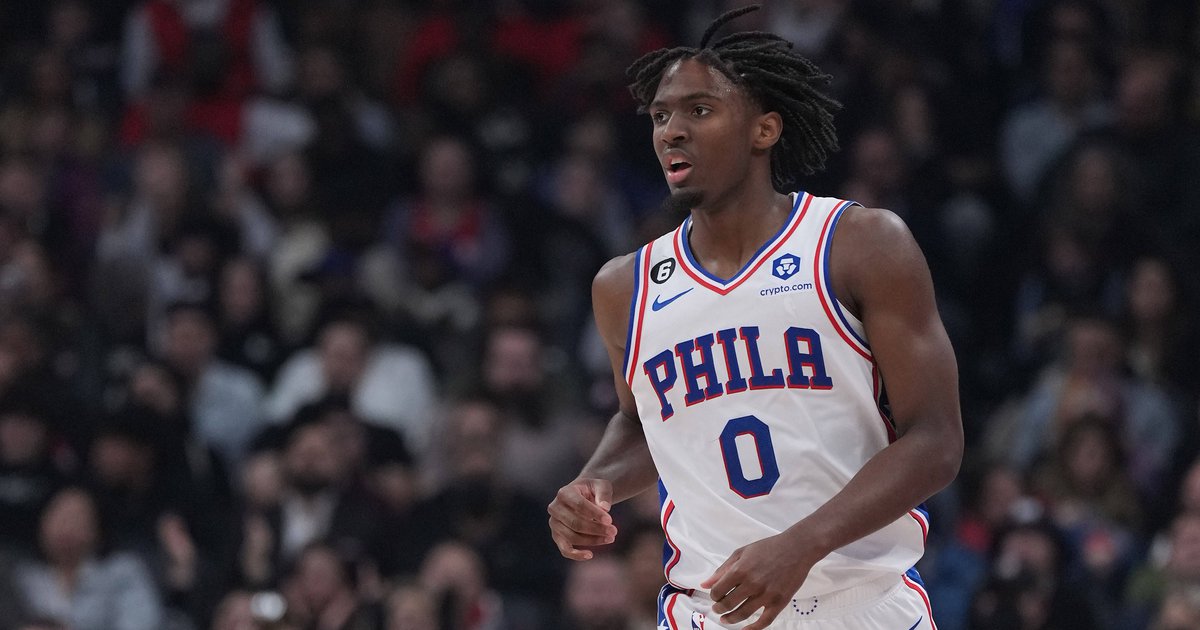 Tyrese Maxey poured in 44 points in a new career-best performance, powering the Sixers to a 112-90 win over the Raptors nearly by himself.

• Sometimes, you don’t need to do much of anything to look better except ride the hot hand. And Maxey was the Human Torch early in this one, lighting up the Raptors on a series of shots he really has no business making.

I don’t mean that as a knock on his shooting ability — he has more than proven his worth there at this point — but as a reflection of his average shot quality to open the game. Young Maxey was firing from deep and firing over the long arms of the Raptors, seeing little daylight as he tried to get his shots up and through the net. No big deal, evidently, with Maxey canning four threes in the first five-and-a-half minutes, keeping pace with Toronto’s team all by himself.

The only person who slowed Maxey down early was, and I know you’re all going to hate reading this, Doc Rivers. Maxey was the first sub out of the game for Philly, swapped out for Matisse Thybulle in the midst of a great scoring run. But hitting the pine for a bit did nothing to mess with Maxey’s flow, as he showed while canning an end-of-quarter runner to close out the first and push the Sixers out in front:

His second quarter was almost as impressive as his first, arguably more impressive when you consider the Raptors knew with certainty that he was cooking with fish grease at that point. With all eyes on No. 0, Maxey made two more threes and a pair of layups in traffic, coming as close as I’ve ever seen him to a scowl after he deposited a lefty and forced Toronto to call another timeout. That was the only thing that felt truly different about this performance relative to any other huge Maxey outburst: Philadelphia’s bubbly, charming young guard felt like he had some angst behind this outing, throwing punch after punch at a Raptors team he wasn’t allowed to let beat him.

What was great to see on top of that was Maxey never losing focus on his other responsibilities on the offensive end. As Toronto committed more bodies toward the paint and just toward him in an attempt to slow him down, Maxey continued looking for teammates, finding open shooters once Toronto would shrink the floor. Becoming a reliable playmaker is the next, perhaps final evolution for Maxey on offense, and there have been some positive signs to start the season, at least when he has had chances to run the offense.

Maxey would cool off some in the second half, because you can only come down after spending the entire first half perfect from the field. And the Raptors did something we rarely see teams do because of the other stars, sending two guys at Maxey on-ball for periods of the second half. But with the game there to be killed off in the fourth quarter, Maxey grabbed the Raptors by the neck and put them out of their misery, canning a pair of triples around the five-minute mark that left you with your jaw on the floor:

With most Philadelphia eyes turned toward the World Series, this kid put on a show. I hope some of you set the DVR to record Sixers-Raptors because it was an effort worth watching even if you have to catch it on the replay.

• Maxey was the highlight reel star of Friday night’s game, but De’Anthony Melton was the guy filling in all of the gaps, making the Sixers better on both ends of the floor. Toronto has constructed a team that lives to create chaos, but they somehow managed to let Melton create as much, if not more mayhem than everybody else in the game combined.

The thing that has jumped out watching Melton play every night is that he is a terrific connector in a variety of roles. Within a small-ball lineup, Melton effectively acted as a center on offense, serving as James Harden’s pick-and-roll partner for much of the evening. Although Melton did not have the greatest night finishing around the basket, his quick reads in traffic created an abundance of quality looks for teammates, helping the Sixers get off to a beautiful start on offense.

He’s also a player who is going to make sure the opponent feels him physically whenever possible, with Melton getting into chests and weaponizing his long arms throughout games. Though this was the first time we’ve seen him get heavy usage as a screener, you certainly see him throwing his weight around there as well, which helped Philly’s ball handlers find the corner and create advantage situations.

To me, he looks like a guy you need to have on the floor as much as possible. There was a third-quarter sequence where Melton created an open three with a quick pass, scooped up the offensive rebound on the missed shot, and then quickly found Tobias Harris near the rim for a layup. He plays with an edge, he’s an intelligent player, and he improves the team’s athletic floor and ceiling whenever he’s in the lineup. Really like what I’ve seen from him so far.

• There was a night and day difference in man-to-man intensity in this group compared to Wednesday’s game. The Raptors still had some success when they were able to get stops, but credit to the group for taking this game seriously after a clunker two nights prior. PJ Tucker was digging for loose balls, Georges Niang was sprinting back for chase-down block attempts (seriously, I didn’t imagine that), even Harden was engaged and hustling back more often than not. Trying matters!

• Thybulle staring down an open three for roughly four seconds before deciding not to shoot at all is why, despite his defensive prowess, he’s struggling to get on the floor this year. But what came next is the important part — rather than continue to stare down good opportunities and let them go past, Thybulle bounced back nicely, canning a pair of threes before the first quarter ended. It’s the sort of thing he needs to do in order to inspire confidence in the coaching staff, and if he can hit shots even semi-regularly, his defense will make him tough to keep off of the floor.

At the very least, Thybulle did enough in this game to get a few games of real playing time in the rotation. In addition to the made shots, Thybulle also had (by his standards) a nice drive toward the hoop that allowed him to find Maxey in the corner for one of his many threes. Thybulle putting the ball on the deck without ending the play in total disaster is a major win, and this was one of the more composed offensive outings we’ve seen from him in a while.

After missing a three in the fourth quarter, Thybulle made perhaps my favorite play of the game, sprinting back in transition and ultimately swiping the ball from the Raptors as they closed in on Philadelphia’s basket. Rather than dropping his head, Thybulle put in a bit of extra work to get back into the play, and Melton would eventually score a breakaway layup because of his effort. I hope the coaches show that in the film room next time they meet, as it’s an example they should all try to follow.

• I maintain this is a bad matchup for him, but Niang looks legitimately quicker than last season, and he has battled on defense during his minutes this year. The off-the-dribble work he has given them has been a nice bonus on top of his shooting.

• On a night with a lot of positives, Harris is where all good offense went to die. Frequently the recipient of great passes from teammates, Harris nonetheless struggled to find the range all night, bricking open three after open three during their second night in Toronto.

By and large, Harris has had a good shooting season so far, adapting well to the higher-volume role the Sixers need him to fill with the Harden/Embiid pick-and-roll dominating time and space in the middle of the floor. That said, it’s nights like these that make you wonder just how comfortable he is in that type of role. When he doesn’t have some feel-out possessions to settle into a rhythm, his slow starts can snowball into miserable nights at the office. This qualifies as one of those.

• A bit of a junk ball game from Harden, who felt like he could only get a bucket on the ugliest possessions imaginable. He did deserve credit on a couple of those, Harden finishing buckets through contact with nothing more than pure strength, but the Raptors succeeded in making him feel uncomfortable for most of the evening.

Harden’s big problem in this one? Turnovers, which have been at least a small part of Philadelphia’s horrific transition defense. Though their raw numbers are low, it has felt like many of their turnovers have been backbreaking, sending teams on their way to free points. For Harden and the rest of this group, there are occasions where it feels like they’d be better off simply throwing the ball out of bounds. That’s how ugly their worst turnovers have been.

The last two were fairly uninspiring for Harden, and with Embiid out for this one, you really would have liked to see him come up with a bit more.

• Tucker is a tough SOB, because if I landed on somebody’s foot the way he did Pascal Siakam’s in the third quarter, they’d be watching me sit with ice on my ankle for the rest of the night.

• I’ll leave the, “Look how well they played without Embiid!” stuff to other people. At the very least, though, let this be a reminder that they can’t let Maxey get lost in the shuffle. He is a primetime player.