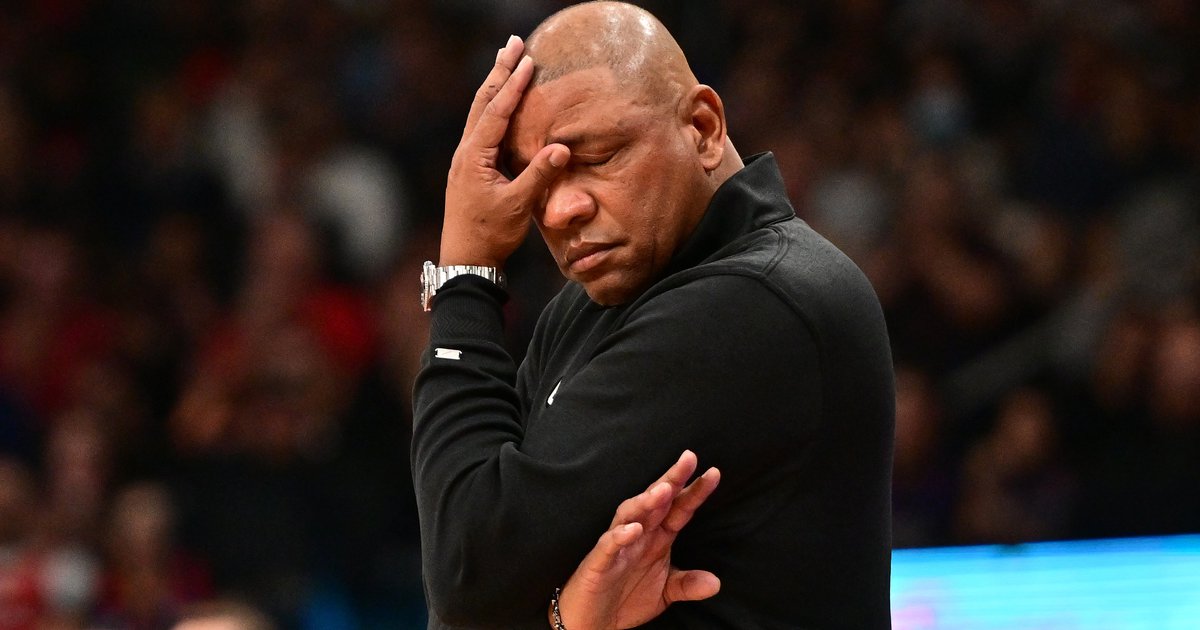 The Sixers’ pathetic transition defense was their undoing in a 119-109 loss to the Raptors on Wednesday, undoing some good work on the offensive end by Joel Embiid and Tyrese Maxey.

• The Raptors’ choice to put a bunch of like-sized athletes on the floor gives a lot of teams problems, and that setup has certainly given the Sixers problems at times in recent years. But Joel Embiid is absolutely unfazed by this version of Toronto, and he turned in an excellent offensive performance on Wednesday night, doing basically whatever he wanted on that end of the floor.

The key for Embiid, as has been the case in his best moments this season, is that he moved decisively whenever the Raptors handed him a matchup advantage. Whether it was a turnaround jumper going right, a spin to the baseline, or a cut through the paint for a powerful dunk, there was little wasted movement against Toronto. Embiid saved his dribble for when he needed it, and double-teams were fairly ineffective, with Embiid moving the ball away from pressure whenever he started to feel it.

Had the team played any amount of defense in Canada on Wednesday night, we might have been talking about this as a blueprint game for the Sixers. If anything, the issue was not getting Embiid the ball earlier and more often throughout the night. Several times, he appeared to have favorable matchups on the interior only for entry passers to hesitate, the window disappearing and the big man throwing his arms up in frustration.

(To be clear: Embiid is as culpable as anyone else for their defensive issues, which we’ll get to below.)

• On a night when Joel Embiid was the clear shining star for Philadelphia for most of the night, Tyrese Maxey was not far behind. The lightning to the big man’s thunder, Maxey was basically a one-man attack in transition, the only man who consistently got behind and around Toronto’s wall of defenders on the break. And considering how long and athletic they are all over the floor, it made Maxey’s trips to the basket all the more impressive, the diminutive guard wading through a sea of arms and legs to emerge victorious on the other side.

It’s probably just a figment of my imagination, but Maxey honestly looks even faster than he did when he first got into the league. Perhaps it’s just a product of how much tougher he has become to guard with the addition of a three-point shot — you take a step in the wrong direction on a closeout, and young Maxey is going by you.

While the outside shot has been the more noticeable, discussion-driving improvement, Maxey’s ability to get all the way to the rim and finish after getting there is a similarly huge deal. As he has gotten stronger, Maxey has increasingly taken the fight to the player guarding or contesting him, driving directly at chests and often drawing fouls as a result. That change in his play, a long way removed from his rookie-year floater barrage, has also allowed him to make tougher finishes at the hoop.

His first 30-point effort of the year went to waste, but it was a good night for him.

• I’m not sure if he’ll ever get a serious look as a starter, but I think we may eventually reach the point where it’s clear that De’Anthony Melton should get a long, hard look as one of Philadelphia’s closing five. Like Matisse Thybulle did/does at his best, Melton brings a different level of athleticism when he hits the floor, and he is miles ahead of Thybulle on the offensive end, offering wiggle off the dribble and competent floor spacing on catch-and-shoot jumpers. He made some heroic efforts to save plays and create turnovers on Wednesday night, standing out as one of the only guys on the team who showed any fight on the defensive end.

The multi-guard look with James Harden/Maxey/Melton is one I’ve been interested in since they put this group together in the offseason, and it’s one I’d still like to see a lot more of.

• Broadly speaking, I don’t like playing the effort card when I can explain a player or team’s issues through other means, whether that’s breaking down scheme, noting tendencies, or occasionally just crediting the opponent for what they do. And the Sixers have had opponents who deserve credit for preying on their weaknesses — Toronto loves to run, for example, and they should feel good about how hard they hammered Philly on the break.

But this is a case where it’s very hard to let the Sixers off of the hook for terrible effort. Maybe there were some gameplan decisions that should have been quickly revisited, like their decision to sag off of Pascal Siakam early. In any case, you can’t show up for a game against a legit playoff team and look completely disinterested in the game. It’s that sort of performance that begs questions about leadership and whether changes will need to be made to get them moving in the right direction.

All over the floor, there are examples of improvements that need to be made on the “give a damn” front. There’s Embiid refusing to close the gap and make it out to shooters, hanging his teammates out to dry even when they have decent possessions. Tobias Harris has tailed off considerably after a strong defensive close to last season, his poor off-ball awareness coming roaring back this year. The starting backcourt has honestly competed better than I thought — Harden not so much in transition, it should be noted — but they still have a ton of issues whenever they need to step outside of their comfort zones.

There were a ton of examples to point to throughout the game, but look at this garbage for just one brief look at how bad things were. This is a game within reach with five minutes left in the fourth quarter!

Watching this team defend in transition is just absolutely infuriating even as a neutral observer. Guys either don’t understand what lanes they’re supposed to fill or don’t care to show that they know, with the Sixers players who do get back often drifting into one another. What’s scary is that they are not a glass-crashing team on offense, either, which means teams are simply beating their guys down the floor by outrunning and outworking them a lot of the time.

One guy who we can spotlight for reasons other than effort: P.J. Tucker. I’ve been higher on his play than others through the first few games of the season, not expecting more than a fill-in-the-gaps guy on both ends, but he was atrocious in this game, far off the pace that Pascal Siakam was setting. If you were concerned about how he was going to age over the length of his three-year contract, this game felt like an example of the worst-case scenario, where he is trusted to take on top assignments and simply has no chance to keep up with those sorts of players.

They might have great top-end talent and offensive firepower, but they will not be a serious threat if they don’t clean this up. I may not like an uninspired effort against a team like San Antonio, but I understand how it happens. Sleepwalking through a game like this is a lot worse, and for a team that talked big about their expectations heading into the year, this group does not look serious about winning. The leadership has been poor all the way around.

(By the way, it’s even more maddening to watch the team get pummeled in this specific way when you know exactly what the Raptors are bringing to the table coming in. Nothing about how they played was a surprise, and Toronto has a distinct identity the Sixers should have been well aware of. The lack of mental preparedness is inexcusable.)

• If Tucker’s defensive woes were his only negative of the night, you would hope to chalk it up as a tough night and move on. Unfortunately, we also had to watch him barely hit the rim on several shots from within five feet of the rim, Toronto players swarming him anytime he got a touch around the paint. The bad game clearly got into his head, too, with Tucker turning down some open corner three opportunities late in this game.

Doesn’t have to mean anything more than a tough start to the year, necessarily, but it has not been a positive start for him in Philly.

• James Harden was at the center of a ton of their offense early, and scanning through the box score I think it would be tough to say he was outright bad. But I didn’t love the pace he played with in the halfcourt, or the fact that he played hot-potato in some late-clock moments that he had created for himself and his teammates.

I’m not opposed to this team having a slow pace of play as a general rule, given that Embiid is best-suited for games that don’t look like track meets. I don’t think, however, that so many possessions should come down to their individual talent needing to bail the team out of slow, stagnant possessions. Doc Rivers certainly shares some blame there — not a lot of scheming open being done, at least not that I can see —

• This is sort of a nightmare matchup for Georges Niang, but his shooting is important for bench units and he has been one of their only consistent sources of production off the bench, so not sure what you do with that.

• Absolutely anonymous game for Tobias Harris, and even that is probably being generous. He did not add anything on offense, and he often actively took away on the defensive end.

• I am sympathetic to the idea that Matisse Thybulle should get some chances to play, which (from what I can tell) seems to be the cause du jour of the fanbase right now. Their defense is clearly the big weakness, and that’s his specialty. Not exactly splitting the atom.

A couple of problems I see with that: I think his negative impact on offense might lead to even more transition opportunities for the opponent, and even if that isn’t the case, I think they’ve been so bad as a group that he’s not going to change their fortunes all by himself. Can’t hurt to try something new, though I wouldn’t expect much, is all I’m saying.

(To argue against my own point: Danuel House Jr. isn’t exactly shooting the lights out right now, to say the least, so I have no problem giving Thybulle his minutes for a game or two and seeing how that changes the rotation.)

• It genuinely felt like the officials were making things up as they went along on Wednesday night. Flagrant reviews for smacks to the head were optional, full-body contact in mid-air was not necessarily enough for a foul call, and touch fouls were sprinkled in just enough to make you shrug your shoulders. The guys on the floor for both teams did exactly that at times, unsure of what a foul was for most of the night.

• If the Sixers start 1-5 with another loss to the Raptors on Friday, it is going to get ugly for Doc Rivers around here, even with the Phillies and Eagles dominating a lot of the local headlines.