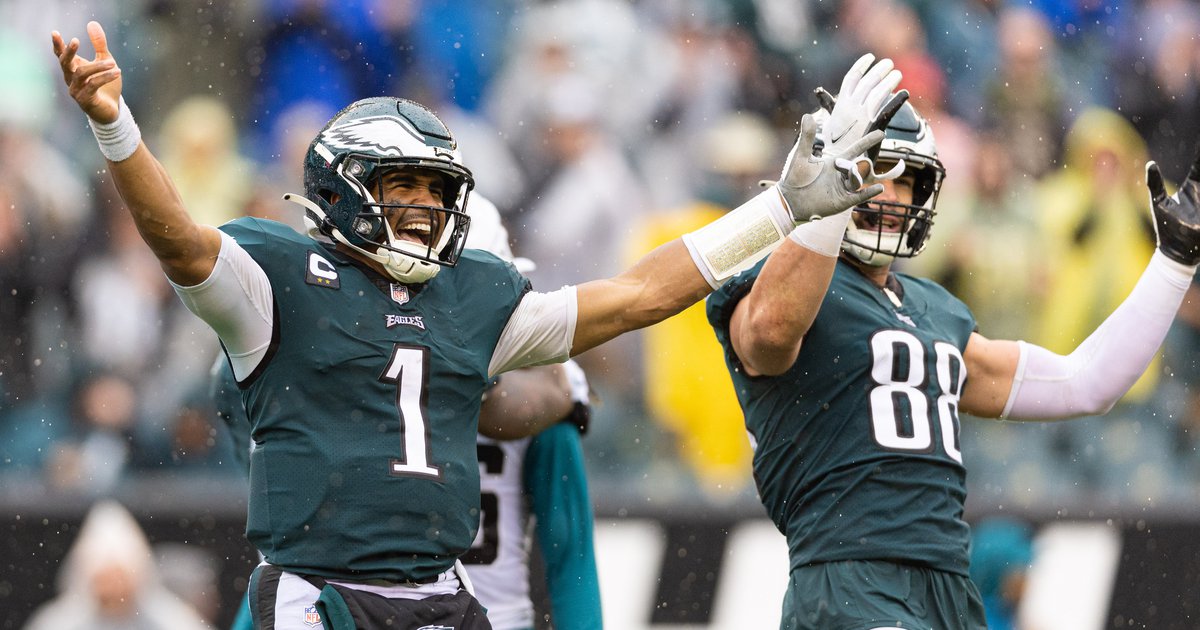 Are power rankings completely dumb and meaningless? Yes. Yes, they are. However, personally speaking, whenever I see them, I click. And now that I’ve sucked you in with promises of many power rankings, you’ll read it and like it.

Here’s where people have the Birds ranked after Week 7. Oh, and here’s our version of these sellout rankings, too.

If this Eagles season ends in another Lombardi celebration, it should be the late-summer trade for cornerback C.J. Gardner-Johnson that general manager Howie Roseman gets the most credit for. Gardner-Johnson — acquired from the Saints on roster cutdown day for Day 3 draft picks — has been a producer in the Philadelphia secondary and one of the team’s vocal and charismatic leaders. Gardner-Johnson had a pair of interceptions of Cooper Rush in the Week 6 win over the Cowboys that sent Philly into its bye as football’s only undefeated team. The Eagles sit at plus-12 in the turnover differential, by far the best figure in the league.

#JimmySays: Gardner-Johnson was indeed a good addition and he had a big day against the Cowboys Week 6, but in my opinion there are at least three players that Roseman added this offseason — A.J. Brown, Haason Reddick, James Bradberry — who have had bigger impacts so far. That shows what kind of offseason Roseman had.

The Eagles are the runaway leaders in turnover differential at plus-12 — with the Cowboys the next closest at plus-6. It speaks to how effective the defense has been at generating takeaways (they’re tied for the league lead with 14) and how well Jalen Hurts and the offense has protected the football, committing just two turnovers in six games. Philadelphia has rushed the ball 225 times — the third most — and has yet to lose a fumble.

#JimmySays: We’ve collectively credited Jalen Hurts for protecting the football this season, but Miles Sanders probably deserves a tip of the cap on that front as well.

If you’re looking for reasons the Eagles might regress from their hot start, two are glaring. The first is turnover differential. Philadelphia leads the league with a plus-12 turnover differential, having given the ball away just twice and taken it away 14 times. That differential is twice as good as the No. 2 team in the league (Dallas, which has 12 takeaways and six giveaways). Even if Jalen Hurts and Co. continue protecting the football with care, it’s unlikely the defense will continue at its current pace.

The second elephant in the room for the Eagles is their injury luck so far. They have a league-low two players on injured reserve, one of whom is reserve defensive end Janarius Robinson, who was a healthy inactive Weeks 2-5. Knock on wood, Philadelphia, while you’re not dancing on your own.

#JimmySays: Yep, I think that’s all fair. One way to look at the injury luck so far, however, is that the Eagles have already banked six games with minimal carnage. You can kind of think of it as giving up zero runs through the first three innings of a baseball game. If the over-under on runs allowed was three entering the game, it’s now closer to two. Same concept with injuries. If you might project that, saaaayyy, 12 players might be on IR when the season is over, that number is now lower.

Additionally, as teams around the league continue to suffer more injuries, they’ll have to dig deep into their reserves to field a starting lineup, while the Eagles will theoretically be playing more capable backups… and they have good depth at most positions.

Like Buffalo, nothing changed for the Eagles during the bye week, and their status as the NFC’s top team remains secure… While Jalen Hurts hasn’t been perfect in recent weeks, he doesn’t have to be with how complementary the team is playing on both sides of the ball.

#JimmySays: Hurts’ play the last three games has been more in line with what most would have been happy with before the season began, as opposed the MVP-level play his first three games.

The NFL’s last unbeaten team isn’t currently scheduled to face an opponent with a winning record before Dec. 4, when the Titans come to Philadelphia. Good thing champagne doesn’t spoil for those still-reveling ’72 Dolphins.

#JimmySays: For those of you who prefer your strength of schedule analysis to not be all about opposing records:

It really is wild that if the NFL season ended today, the Eagles would have a top-five pick thanks to the Saints’ trade for Chris Olave in the 2022 draft. The Eagles are set up really well for the next few years.

#JimmySays: Technically, the Saints traded up with the Commanders to draft Olave, but the general point here that the Eagles already have a good team and they can add to it through their draft resources is well taken.

As a reminder, here was the Eagles-Saints trade, made back on April 4:

The Eagles essentially traded pick 16 for a first-round pick, a second-round pick, and a third-round pick, while also moving up a spot in the 2022 draft. Highway robbery. And Eagles fans can look forward to rooting against the Saints next year as well, assuming Roseman doesn’t trade that 2024 second-round pick that he acquired from them.

They come off their bye with a game against the in-state Steelers. They need to be better in the second half of games going forward.

#JimmySays: CBS with the 🔥 analysis, as always.

Average power ranking of the seven media outlets above