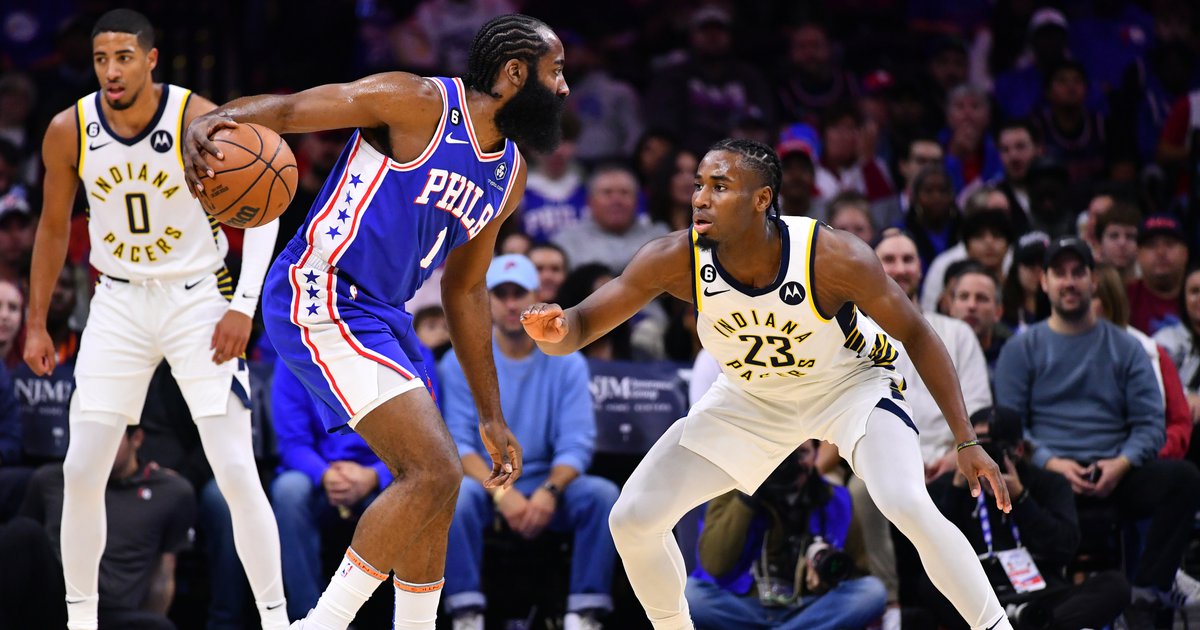 After a loss to the tanking Spurs on Saturday evening, nothing was going right in the Sixers’ world. I had thought that the San Antonio matchup would be a good “tune-up” game for them after losses to tough Boston and Milwaukee squads to open the season. Not so fast! The Sixers, did, however, start to smooth things out on Monday, beating the Pacers 120-106 down in South Philly.

Even if it wasn’t the most dominant outing you’ll see with a roster this talented, the Sixers pretty easily controlled things wire to wire. They needed any win they could get after that 0-3 start.

With our Sixers beat writer Kyle Neubeck on his honeymoon, I’ll hit you with my instant observations from the game that was…

• When a team loses, there’s always going to increased scrutiny on the best player. That was the case with Joel Embiid during the Sixers’ slugging start to the season. Embiid turned in a rough performance during Thursday’s home opener against the Bucks, playing some of the worst basketball I’ve seen from the guy. He looked reenergized on Saturday, dropping 40 points on the Spurs, and those vibes continued Monday.

His raw stats weren’t as big as Saturday’s (26 and five), but he was fluid moving down the floor, more engaged defensively and stronger when positioning himself on the low block than he’s showcased so far this year. He still may be dealing with lingering injury issues, but the last two performances from Embiid should help quell Sixers fans’ concerns following the first two games of the season.

• Even with those three-straight losses, the highlight of the Sixers so far during the 2022-23 campaign has been James Harden’s playmaking. Whether it’s something as flashy as finding a guy for a dunk in transition or as simple as expertly tossing an entry pass to Embiid on the post, Harden is illustrating that his skill as a passer is every bit as good as his scoring. With 11 assists against Indiana, he’s topped double-digit dimes in back-to-back games.

• One element of Harden’s game that I’ve never seen from him that’s been on display the past few nights: his midrange game. As the most Moreyball player of all time, it has been rare to see Harden do anything but shoot a three, attempt a layup or take free throws. Dare I saw he looked a little Kobe Bryant-esque backing down a Pacers defender in the second quarter in the post for a turnaround fadeaway bucket.

I’m never going to sit here and advocate for more midrange jumpers, but it’s something that does suit Harden’s physical profile. Throw away the fat jokes. Harden is one of the strongest guards ever, coupling that strength with his elite deacceleration to become a historically great scorer. I’ll chalk a Harden midrange shot up as a great Plan D for him.

• You would’ve thought Allen Iverson just crossed up Michael Jordan with the crowd reaction to a Paul Reed steal, just minutes after he checked into the game for the first time with a rousing applause. B-ball Paul stays the people’s champion when it comes to the Sixers’ backup center hierarchy.

Speaking of Reed, Doc Rivers deployed a lineup of Harden, Reed, Tyrese Maxey, De’Anthony Melton and Danuel House Jr. at one point in the first half. It was similar to a unit Rivers used during home opener (with Montrezl Harrell instead of Reed) that brought them back into things and had them nearly steal a win away from the Bucks. A non-Embiid construction like that built for shooting and the transition game, as I wrote last week, is something Rivers need to make use of come the postseason.

• Franklin was wearing a Phillies jersey during the game. Red October is spilling over across Pattison Avenue.

• Fan favorite and budding All-Star Tyrese Maxey had an off night, scoring just eight points in 37 minutes of play. He started just 2-10 from the floor before hitting a three late in the fourth as the Sixers were padding their lead. The Sixers have yet to play a game this season where their Big 3 was firing on all cylinders. Embiid playing himself into midseason form, Harden continuing his best basketball as a Sixer and the expectation of Maxey taking another developmental leap should calm Sixers after a brutal opening week to the season.

• Georges Niang had a laughably bad turn of events to end the first half, catching a pass, stepping back into a three, shooting it with multiple Indiana defenders in his face and airballing it. He has a little peak Process energy to him with some of his flailing that comes with being a below-average athlete at the power forward spot.

• Furkan Korkmaz entered the game in garbage time and almost immediately bricked a three that made what was left of this crowd groan. That’s the cherry on top of any Sixers win.