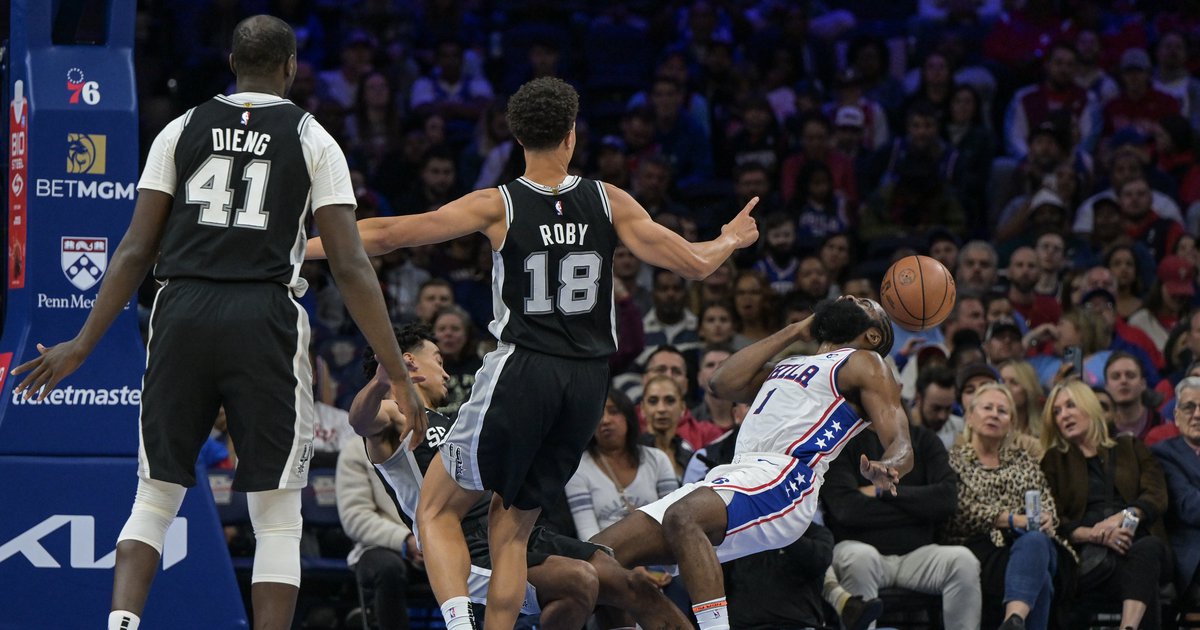 The Sixers should be lucky that the Phillies and Eagles are hogging all the attention in the Philadelphia sports realm, as their horrific start to the season is flying slightly under the radar. They dropped two games this week to the Celtics and Bucks. That’s understandable given that those are the top-two teams in the Eastern Conference. Losing to a Spurs team that is actively tanking for Victor Wembanyama? Oof.

Deservingly booed by their fans at the Wells Fargo Center, the Sixers fell 114-105 to San Antonio to drop their record to 0-3.

It’s become increasingly clear that regular season success doesn’t matter in terms of how the Sixers are viewed. All that matters is success in the spring and early summer. There’s a difference, however, between a fan base tuning out early and the team themselves doing that. It feels like the latter right now!

With our Sixers beat writer Kyle Neubeck still living it up on his honeymoon, here are my instant observations from a rough Sixers outing…

• Part of me didn’t want to list anything for “the good” to sum up the Sixers’ early woes. That’s an overreaction for Game 3 of the 2022-23 campaign, but I do not blame any Sixers fan in the slightest who is fed up with this team or has (wisely) chosen to spend Saturday evening preparing for a Phillies postseason game.

• The Sixers have a pulse in the transition game. The combination of Tyrese Maxey and James Harden on the break is a scary sight. It obviously wasn’t enough to get past a lowly Spurs squad, but the two guards are perfectly complimentary there. Harden’s playmaking is still as elite as ever. Maxey has Barry Allen speed, can rise for dunks and can hit pull-up threes. Again, there should’ve been more of this on Saturday, but the DNA of a great offense still remains with this team.

• Joel Embiid, on the heels of uneven performances by his standards on Tuesday and Thursday, was certainly not the reason the Sixers lost on Saturday night.

Embiid threw down an oop from Maxey on first possession of second half. Later in the third quarter, there was another alley-oop from Maxey to Embiid. It was encouraging to see the big fella energized after his lackluster performance on Thursday, turning in as bizarre of a performance as I’ve seen from him (grading the guy on the MVP scale). Doc Rivers indicated as much earlier in the week, but it looks like if still dealing with the aftereffects of plantar fasciitis from over the summer.

Embiid ultimately dropped 40 and 13. That’s the version of Embiid Sixers fans have been accustomed to during his previous two MVP-caliber seasons. More of classic Embiid going forward will eliminate these nagging losses.

• Eagles quarterback Jalen Hurts rang the bell before the game:

I’d say that’s a big step up from Michael Rubin!

• There was a general disinterest that permeated the arena. I don’t get it. As I’ve said a hundred times the last few days, it’s only the first week of the season, but you’d hope to see some life in the very least, right?

• The Spurs are constructed to not win basketball games this season. They gave Rivers and this whole Sixers roster the business. Rivers loves to say, “Would you ask Pop that question?” to reporters. I probably wouldn’t ask Gregg Poppovich the same questions as Rivers on Saturday given that his squad played the Sixers off the floor.

• The Sixers gave up a four-point play at the end of the third quarter. I don’t know the hardcore numbers, but I can only assume the Sixers lead the history of the universe in four-point plays allowed.

• The first field goal didn’t come until there was 9:25 remaining in the first quarter. It was a bad sign for a game that was as uneventful as possible.

• I was not covering the game in person due to some additional work responsibilities with the Phillies NLCS game, but it appears that some Sixers fans booed former head coach Brett Brown, who is now back with the Spurs as an assistant under Popovich:

A mix of cheers and boos from the crowd as Matt Cord acknowledges Brett Brown. No tribute video, just a speech. Brett remained in the San Antonio huddle

I was a big believer in that it was time to move on from Brown following the 2020 season (if not earlier), but I don’t think the booing was warranted! Fans can boo whomever they want, but I’d chalk him up as a guy not to boo. By all accounts, he was a great dude, helped guide the first good Sixers team in 17 years and was beloved during The Process.