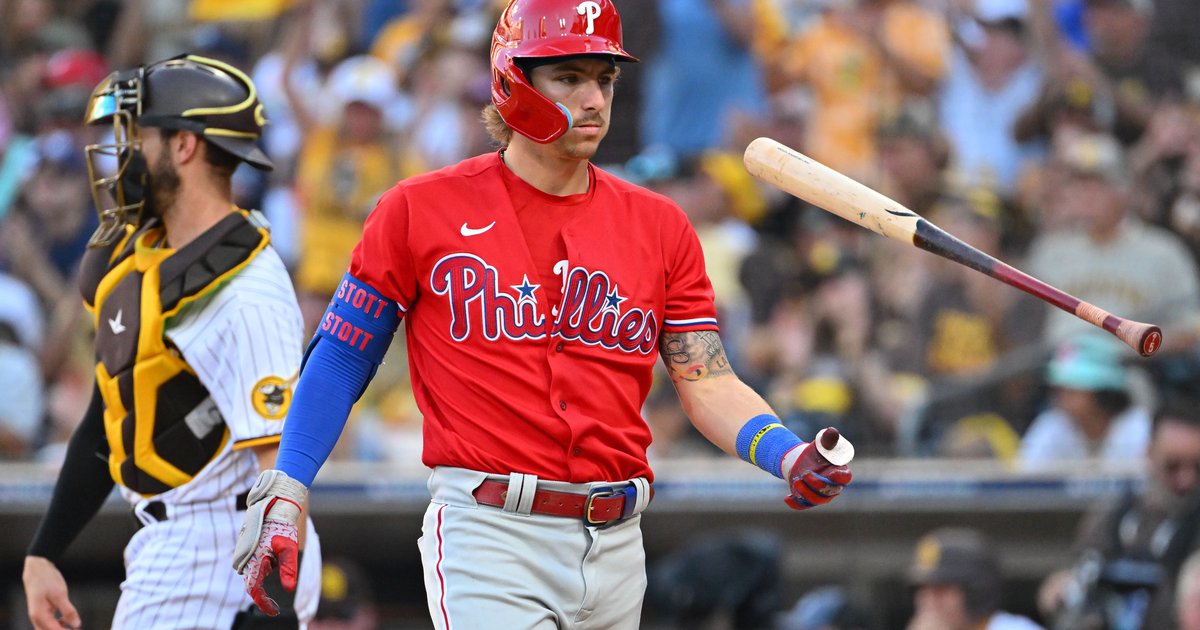 SAN DIEGO — The Phillies had a successful trip out West, despite their disappointing 8-5 loss in Game 2, splitting two games to open the best of seven NLCS series. They’ll have home-field advantage heading to Philadelphia with the next three games at Citizens Bank Park this coming weekend. It will be rocking. (And much, much colder…)

They jumped ahead early, but Aaron Nola did not have his best stuff as he was knocked from the game in the fifth and the Padres offense made up for a 0-spot in Game 1.

Before everyone flies back to the eastern time zone for the middle three games of this series, let’s check in with the good, the bad and the ugly from the Phils’ first loss in what seems like forever:

• The Phillies got back to back singles in the second inning — an offensive chance occurring sooner than usual for this team this postseason — and it led to another first strike. Bryce Harper scored on an Alec Bohm knock putting Padres ace Blake Snell on the rocks early (and more importantly a 1-0 lead for Philly). Three more runs would score from Matt Vierling, Edmundo Sosa and Kyle Schwarber (error, base hit, ground out). The way the Phillies have pitched, their 4-0 lead looked insurmountable.

It’s been great to see the chunk innings Philly has been able to put together this postseason. In addition to them being effective on the scoreboard, the have also been positively deflating for an opposing team. Ask the Padres, or the Braves, or the Cardinals — it’s hard to come back from allowing a 4-, 5-, or 6-run inning without pressing a little bit. Unfortunately for Philadelphia, the Padres were able to do it.

• It may not have been the result the Phillies wanted as a team, but Harper continues to hit the cover off the ball, and he added a double in the sixth inning to help keep Philly’s hopes alive.

Bryce Harper leads the majors with 13 hits this postseason. The next closest player has 10.

Harper has an extra base hit in seven straight games.

• It’s good to see the Phillies didn’t just lay down and die late in Game 2. With a four run deficit and basically no momentum, Rhys Hoskins quietly hit a moonshot solo home run to left field. No rally would follow despite a J.T. Realmuto single.

• Zack Wheeler and Aaron Nola have been absolutely incredible for the entire month of October, but it might be a bit of a stretch to expect they would be 100 percent completely flawless through this entire run. Nola’s first hiccup wasn’t the end of the world, the pair of solo homers he gave up in the second inning are probably fine in the large scheme of things particularly after he was spotted a four run lead in the top half of that frame.

But the wheels fell off the wagon a few innings later. The Padres were able to finally strike with some small ball in the fifth, when a run and hit led to an RBI single for Aaron’s brother Austin Nola to cut the Phils’ early lead to 4-3.

Nola continued to get roughed up by a pair of hits driving in a fourth run in what is easily the worst outing Nola has had in a while. He was ultimately tagged with four runs in 4.2 innings, with six strikeouts and seven hits allowed.

• Brad Hand had his hands full when he took over in relief of Nola and immediately loaded the bases by hitting Jake Cronenworth. But when the lefty surrendered a two-RBI single to Brandon Drury, the Phils’ old bullpen issues had reared their ugly head. Rob Thomson kind of got screwed over with the MLB’s minimum hitter rules, as he was forced to leave Hand in for yet another batter and yet another run scored, giving the Padres five in the inning and a 7-4 lead.

• David Robertson returned and it was… not a good playoff debut. Manny Machado basically smashed a solo shot all the way to Los Angeles to put the Padres up 8-4. Robertson’s return to the bullpen was much anticipated as he’s by far the most playoff experienced arm on the team. Hopefully this was a blip.

• It wasn’t of much consequence, as the pitching was probably the bigger issue today, but there were some blunders in the field — particularly late when the Phils failed to turn a double play and then Alec Bohm failed to handle a chopper down the middle. The Padres didn’t score any runs from their two men on situation in the eighth, and the Phillies deserve some praise for avoiding costly defensive miscues for the majority of the postseason, but it’s definitely something that would prove better as an isolated incident.

• Philadelphia’s second run cam courtesy of… the California sun?! With a rally going in the second, a seemingly routine fly ball to right off the bat of Vierling was completely lost in the sun by Juan Soto plating Philly’s second run. “Blinded by the Light,” right? Great song.

• The fifth inning took a very very long time to play and was probably one of the Phillies’ worst stanzas of the season. Things have been going extremely well and it seems inevitable that something like this was going to happen, but it still was really tough to sit through (especially in San Diego with their fans bursting with excitement after a stinker in Game 1).