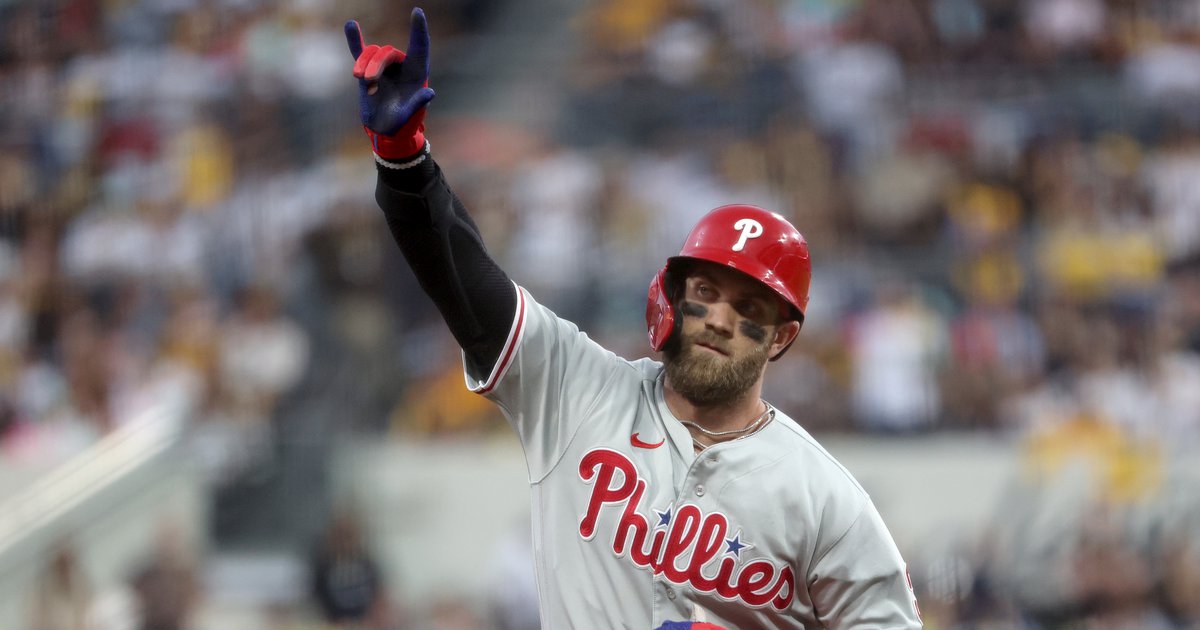 SAN DIEGO — The Phillies got two solo bombs from their superstars and Zack Wheeler did the rest, as the Phillies once again jump ahead in a playoff series and this crazy red October continues.

A 2-0 final tells the story pretty well, as neither team was able to muster much offense opposite a pair of the best starting pitchers in the game.

The vibes are really good with this team right now and things couldn’t be going any better. As we’ve done all postseason long, let’s take a look at the good, the bad and the ugly before Game 2 on Wednesday:

• Bryce Harper is really freaking good man. In a pretty solid pitching duel between two aces — Yu Darvish and Zack Wheeler — not much by way of offense came in the first half of Tuesday night’s game. Until Harper stepped to the plate for the second time, looking to get revenge for a stolen base hit his first time around.

He proceeded to do this:

It is literally not possible to be more red hot at the plate than the reigning MVP is right now.

• It’s been a very quiet postseason for Kyle Schwarber, the Phillies’ unconventional leadoff man who led the National League in homers this season. Hitting at a .050 clip heading into Game 1, he was responsible for the Phillies two early scoring chances. He reached with a walk and got all the way to third in the first (and was stranded there) and also collected a base knock — the first for either team — in the third.

And then he took the obvious next step, a leadoff moonshot that probably killed a whale in the Pacific Ocean, traveling 488 feet at 119.7 mph. Damn.

The Phillies have had some slow starts this month, and having an invisible leadoff man is not a solution for that. Here’s hoping Schwarber keeps it going as this long series continues.

• Wheeler took a no-no into the fifth which is pretty good, though we’ve seen better in playoff games for this team. Still, he was a reliable ace out there, tossing seven innings of one-hit (and one-walk) baseball. He struck out eight, economized pitches, and made it easy for the defense with lazy fly balls and groundouts all night long. Who knows, Wheeler could be on the hill in Citizens Bank Park with a chance to clinch this weekend.

• Your fun Phillies stat of the evening: the Phillies have an all-time record of 18-7 in Game 1s, the second best winning percentage in that instance of any ball club. It seems as though this is a very old franchise that has been pretty darn opportunistic in limited playoff opportunities.

• It will be interesting to see how much experience starts to play a role as the Phillies go deeper into the postseason. The team has only five players who have played in a league championship game before in their careers (Jose Alvarado, David Robertson, Kyle Schwarber, Garrett Stubbs and Noah Syndergaard). Only two of those guys have played in more than two games.

They have an experienced manager in Rob Thomson who has been through a lot as an assistant coach and front office guy with the Yankees, in addition to postseason staples Robertson and Schwarber. The rest of the roster is young and will be figuring out how to handle the pressure as it comes.

• What a terrible time for an error. With a perfectly placed double play ball in the bottom of the ninth with one on and one out, Bryson Stott couldn’t corral the throw from Alec Bohm and both runners were safe. The ballpark finally started rocking as the Padres got their first real scoring opportunity of the entire night. Jose Alvarado remained in the game to face a righty — for some reason — but he got a fly out and strikeout to earn the save.

• Flying to San Diego is expensive — and doing it on two-days notice is even more so. But there were very few Phillies fans at Petco Park Tuesday night. This honestly might be one of the few markets that Phillies fans aren’t built to have their presence felt in.