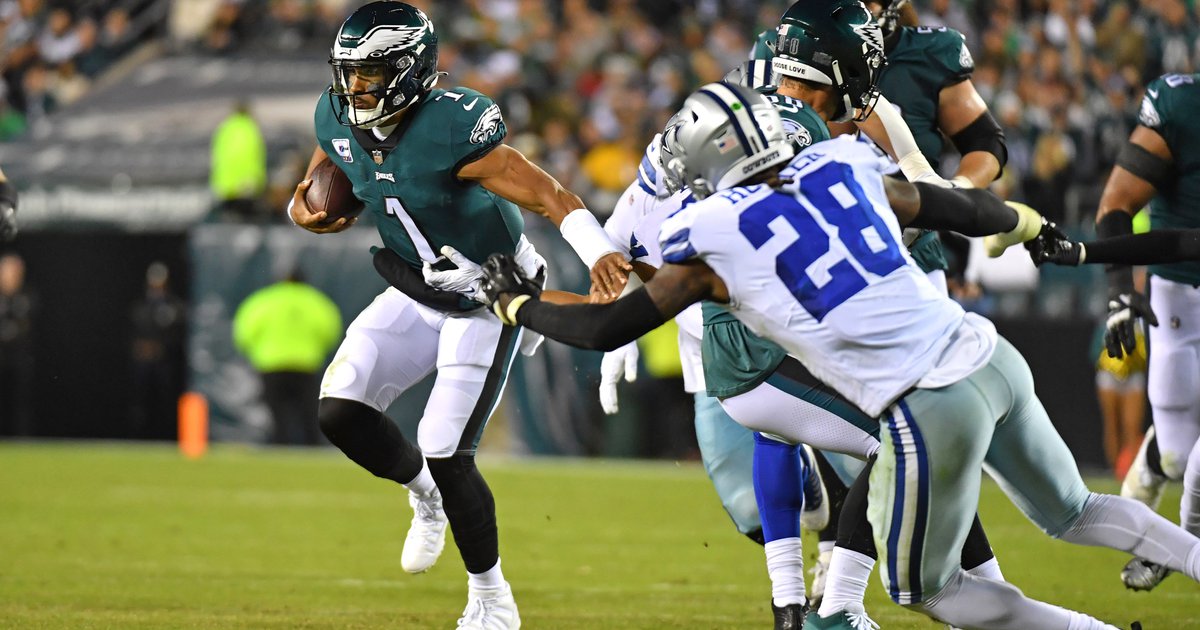 The Eagles beat the Cowboys Sunday night to remain the NFL’s only unbeaten team in a sometimes ugly but well-earned 26-17 win in South Philly.

Philadelphia has answered every challenge this season and while they may not be blowing teams out anymore, they are irrefutably contenders with the bye week looming next weekend.

As we do after every game, here’s a look at the good, the bad and the ugly from the second half of Week 6’s primetime battle:

• It took a while for me to have a reason to write something in this section. After a dominating 20-3 start in the first half, the Eagles offense looked uninspired and the defense was winded. With their first-half lead almost diminished, Nick Sirianni made a savvy coaching move. On a drive that went 75 yards to put the Eagles back ahead by double digits, the Birds fired off 11 straight runs, leading to a slant to A.J. Brown and a touchdown pass to DeVonta Smith.

DeVonta Smith has caught all five of his targets tonight for 44 yards and a touchdown.

The play-calling on the drive resembled the 2021 Eagles offense that led the league in rushing and got them an unlikely playoff berth. It’s kind of nice to see that Sirianni has that in his back pocket and the team can still execute. It was a big boy drive, a “we’re not going to mess around anymore” group of plays that reminds the NFL that this is a team that can win in a variety of ways.

• We should mention here that while this was far from Jalen Hurts’ best performance as a pro, he managed the game and didn’t make any glaring mistakes. He’s not going to be the kind of QB who’s going to put up MVP numbers from week to week — especially not against a defense like Dallas’.

• The defense created a second turnover in the fourth quarter, as C.J Gardner-Johnson nabbed his second interception. It all but clinched their latest victory and also reaffirmed that Howie Roseman just wins trades. The safety they acquired from the Saints will no doubt be getting an extension in the city, and he’s one of three ball hawks in the secondary that have given offenses fits all season long.

• Did the Eagles play well enough to end any doubt that they are the best team in the NFL? Some will say yes — they are 6-0 after all — and some will lean on weaknesses that leaked through the margins in their last two wins, each of them too close for comfort. The Chiefs and Bills still seem to be on another level but somehow they have each suffered setbacks while Philadelphia has had none.

The fact of the matter is, however, that until someone stops them for a full 60 minutes, the Eagles are the NFC’s frontrunners. The Cowboys are definitely the best defense the Eagles have faced, and with Dak Prescott on the field I’m not entirely sure this game has the same outcome. But the Eagles are taking care of business each week and remain perfect.

• Lane Johnson left in the second quarter with a concussion. Not the best news — but as we’re about to get to the bye week is coming so he may not miss another game. Jack Driscoll took over at right tackle and there was an obvious drop off. The swing tackle had trouble stopping the Dallas bull rush a few times resulting in at least one sack.

• The Cowboys made it a game thanks to their run game in their opening third quarter drive. The Birds are 12th overall in rush yard allowed with 105 yards per game through their first five victories. They allowed a nine play, 79-yard scoring march that saw Tony Pollard and Ezekiel Elliot each make an impact. Teams seem to be attacking the Eagles defense with more off tackle and outside runs which makes sense as the Eagles are very strong up the middle. This is a trend to keep an eye on.

A second touchdown drive followed that took up 7:07 minutes, 15 plays and covered 93 yards, as the Cowboys just ground down the Eagles defense. I can’t recall seeing another team do that to the Birds’ D, which has made its living this season by creating turnovers, sacks and getting hands on the football. When you pick up four or five hard fought yards per play, the defense is going to be gassed and that’s what happened. A Cooper Rush TD toss cut the double digit lead to just three points.

• You will no doubt be reading plenty of stories this week about the Eagles bye week coming too soon. It’s the second possible bye this season and the Eagles have a ton of momentum, as we’ve documented here and elsewhere.

The bye is in a bad spot for a number of reasons. For one, the will have 11 weeks of games in a row which is a lot. They also don’t have too many injuries that a week off would serve as a respite for. Time away from football right now is probably not what the Eagles and their coaching staff feel is needed.

However, they face the lowly Steelers when they return from the break — which is as big a layup as you can get in the NFL in 2022. They shouldn’t be any worse off, but there could be some attrition and fatigue by season’s end.

• I have covered every home Eagles game since 2013 and I really don’t recall there being a halftime performance concert thing. It was awkward and dark and no one knew who was performing. I’ve actually spent five minutes googling who it was and could not get an answer. Hope this isn’t a thing that continues. There’s enough entertainment when your team is 6-0.

• How was this not a block in the back?

• Shamus mentioned this when he wrote up the first half, but Cooper Rush was 4-0 coming into this game. Not sure what that says about the rest of the NFL. It might just be me, but the quality of teams across the league seems as bad as it’s been in a while.

• Osa Odigihizuwa straight up tackled Jason Kelce with a minute left in the game and the Eagles looking to drain the clock. He got a game misconduct. Kelce can talk some trash.