The rebirth of Citizens Bank Park: A vibe check from the Phillies’ home playoff win 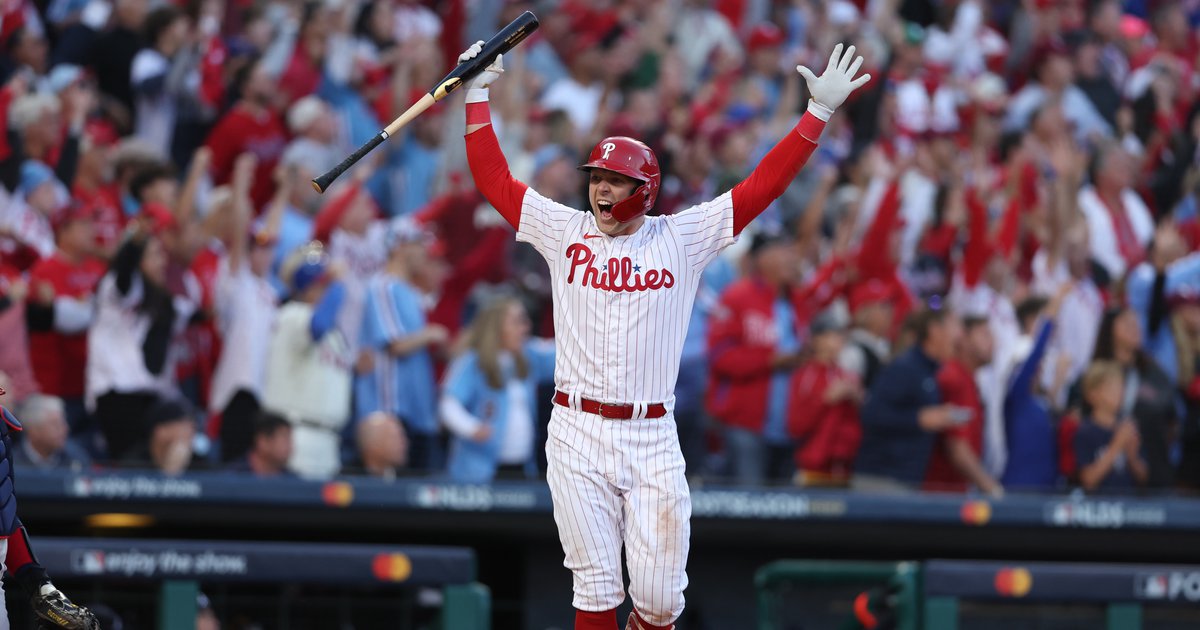 It had been 4,025 days since Philadelphia had seen playoff baseball. I was an idealistic 17-year-old snob way back when, worried about what college I was going to get into, who had an open house the upcoming weekend and living and dying with every single pitch of a Phillies game. I entered Citizens Bank Park on Friday a grown man with bills and rent and the worries of adulthood, but once I took my seat amongst the 45,000 rabid fans, I was transported back to my youth, back to the feeling that I could be a part of something bigger than myself, the feeling that the wider world revolved around Philly sports.

I had last seen a Phillies playoff game with my own two eyes back in Game 2 of the 2011 NLDS against the Cardinals. The Phils held a 1-0 lead in the series and went up 4-0 early on St. Louis. They lost 5-4. I walked back home to deep South Philly despondent, but confident that the Phils had the Cards’ number and would still inevitably win the series. They, of course, didn’t and the Phillies descended into an afterthought in the city. It was a dark 11 years, a period that caused people, myself included, to forget how CBP could truly rock, could give off life and bring baseball back into the limelight.

I hopped off the Broad Street line around 2:00 p.m. on Friday, Andrew W.K.’s “I Get Wet” blasting in my AirPods, an ice cold six-pack of Miller Lite pounders in my hand ready to take in the first Phillies playoff tailgate of my life. I never drank during the Phils’ playoff run in my high school days. In retrospect, I love that. It was pure. Baseball is such a game for the youth and I experienced it to the fullest. I was 14 and a freshman in high school when the Phils won the 2008 World Series. 14 years later, I’m a lot different on a multitude of levels, having experienced success and failure in every facet of being the way that a human does. I was a little more hardened, but ready to transport myself back into the magic of being one person in 45,000, taking part in the biggest event in all of Philadelphia.

I’ve joked that the scene on Broad Street after the Eagles won the Super Bowl felt like the series finale of a sitcom about my life. I saw my best friends, I saw friends I hadn’t seen in a couple years or 10 years or 15 years. I traced the steps I had taken an infinite amount of times with a new lease on life, a feeling that I could conquer the world and make Philadelphia its global capital. An NLDS win ain’t the Super Bowl, but there was something special about the Sports Complex on Friday, a vibe I hadn’t gotten since the legendary NFC Championship Game on January 21, 2018. The energy was electric. I linked friends new and old. I said, “Can you f—ing believe we’re here right now?” an innumerable amount of times.

The crowd was ready for blood. It smelled it. With a single swing from Rhys Hoskins, the man whose gaff defined the Phils’ Game 2 loss down in Georgia, Citizens Bank Park rocked like it hadn’t in more than a decade:

The people who had seats next to me must have been in the bathroom line because all I can remember is running down my row and fist-pumping in a way that would make Danny Briere jealous. Yes, I am a media member and allegiances have to be put to the sides at times, but, screw it, I’m from Philadelphia. My history as a sports lunatic is well documented. If it wasn’t for that fanatic past, I’d never have the job I currently do. Live in the moment. Soak it up. It’s been 11 years since Philadelphia experienced something like this.

As I was walking into the stadium, I passed the Mike Schmidt statue outside the third base gate. People were taking pictures in front of it, as they should, living it up for this Phillies rebirth. There was a father with a daughter that couldn’t be more than five or six years old hanging on Schmidty. It melted my heart. That kid wasn’t even alive the last time the Phillies were good! It reminded me of going to the Vet as a young kid with my own dad, waving a foam finger and asking to go home in the third inning like a little brat. It was this perfect encapsulation of fandom. I thought back to my high school days when nothing, nothing, mattered more than this team. It was the ultimate “it feels like a win” moment. I’m getting choked up as I write about it. That’s what sports are about. That’s what life is about, creating these bonds and memories with your friends and family because some guy who was as cold as Antarctica hit a freaking missile into the left field stands.

By the time Bryce Harper hit a moonshot two batters after Hoskins, it was a party. As I took in the scene and looked at the Philadelphia skyline, I thought that if I could be anywhere on the face of the earth doing anything, there was nowhere else I’d rather be.

On the subway ride home, I was listening to this Phillies playoff playlist I made on Spotify. “Wedding Singer” by Modern Baseball played and the lines “Five blocks from Tasker-Morris Station, f—ed for the ride home if I can’t find two bills to rub together before” came up literally as I was passing the Tasker-Morris stop. It felt like a movie. Again, I could’ve been anywhere in the world and I loved being on the subway after a Phillies game listening to one of my favorite bands in my city.

I wish I could watch last night over and over. It was a supercut of what makes Philadelphia the greatest place in the known universe: a redemption story for the ages, strangers high fiving and shoving and jumping on one another, beer flowing like the 18th Amendment just got repealed and the feeling that this city is the nexus of human life.

The rest of the world should be terrified if Philadelphia gets to host a World Series game.