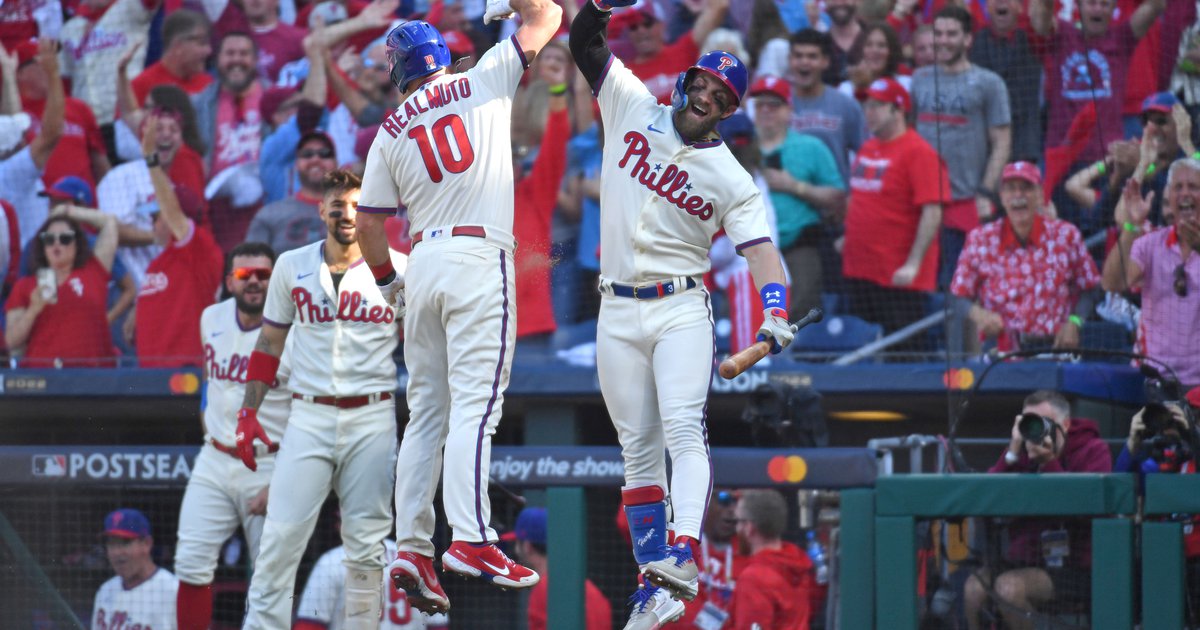 The Phillies are California bound.

After a dominating Game 3 performance to take control of their NLDS series against NL East rivals the Braves, the Phillies did it again in Game 4, jumping out to an early lead thanks to their high paid stars playing like high paid stars in a 8-3 win to take the series (3-1).

The team will be playing whoever wins the other NLDS series between L.A. and San Diego with Game 1 scheduled away from Philly on Tuesday.

But before we start looking at what could be, let’s look for a second at what was in an incredible clincher:

• I’m not sure if you’ve been made aware, but it is widely believed that the Phillies roster contains the “best catcher in baseball.” If you’d like some evidence, take a look at the first inside the park home run in team playoff history — on a hit in the third to put Philadelphia ahead 4-1:

Just look at that hustle. Chase Utley would be proud.

• Phillies manager Rob Thomson made the bold decision to go with a bullpen game in a clinching scenario and it actually worked. With their top three starters currently on short rest, Noah Syndergaard got the nod to “open” the game and struck out three in three solid innings. The rest of the pen came in and did the job, with three spread out solo homers their only blemish.

It will be interesting to see how Thomson lines up his staff for a full seven game series. They’ll probably need a fourth starter, but there’s a chance they’ll go with Ranger Suarez, Zack Wheeler, Aaron Nola and then a repeat of this pitching gameplan if they have a rested bullpen for NLCS Game 4.

• The first scoring chance for either team in the game came in the bottom half of the second, after an Alec Bohm infield single and Jean Segura base hit put runners at the corners with just one away. The hero this time was Brandon Marsh, a controversial trade deadline acquisition because he was essentially the result of a prospect swap for a top catching prospect.

Dave Dombrowski’s creative gamble back in the summer has been completely validated and then some:

The dinger gave the Phillies yet another comfortable early 3-0 lead.

Marsh wasn’t done there. A double in the latter half of the fourth put he and Bryson Stott (one-out single) in scoring position for the top of the order. After Kyle Schwarber was given first base, however, Rhys Hoskins and Realmuto failed to plate a run.

• In recent games, particularly in Game 3, the Phillies have been able to get insurance runs when needed. It happened again in a key spot in the sixth, as Hoskins made up for getting out with the bases loaded in the fourth when he hit an RBI single to give the Phillies a little breathing room, 5-2. With this being essentially a bullpen game and with a Game 5 scheduled for Sunday if necessary, making things easy on the Phillies relief corps was a winning strategy for sure.

Realmuto got in on the action with a swinging bunt RBI single, flashing the same speed that got him four bases earlier in the game, giving them four runs of clearance. Bryce Harper knocked in one of his own on a single in the sixth too. A 7-2 lead is a comfortable one.

• If Harper stays this on fire heading into the next series watch out. He hit a solo homer to add some icing the the cake in the eighth inning. This postseason through six games he has three home runs and is hitting .500.

• Just some interesting Phillies factoids for ya. The Phillies converted their latest chance to clinch a berth into the NLCS and apparently the team historically has an incredibly impressive record in such spots — they are 12-4 all-time in clinching games and have the best winning percentage of any MLB team in such spots.

Of course, you will no doubt notice that the Phillies have been around for over 120 years and they played just their 16th all-time playoff game with a chance to clinch. The Phillies have lost a lot, is what I am trying to say. Enjoy this — it’s rare.

• You could hear a pin drop it was so quiet in the third frame when Orlando Arcia hit a solo homer off Syndergaard into left field (to make it 3-1). There’s more ambient noise during batting practice than there is when the Braves do something good in this series in front of the locked in Phillies crowd. Matt Olsen went yard off Bellatti in a similar spot in the following inning with the same result. Yes, giving up a two solo homers is bad. But leave it to the Phillies faithful to make this into a bit of a positive. Stay locked in.

A third solo shot followed to straightaway center off Jose Alvarado in the seventh, but the Phillies will take that over the kinds of sustained rallies they have been successful with this series.

• The Braves were the defending World Champions and the Phillies made short work of them. That deserves mention. Atlanta really never even showed up. There’s something to be said for hungry professional athletes from Philadelphia.

• The Phillies clinched at home and it was spectacular. It’s almost as if the Phillies snuck up on everybody this season. They took a back seat early on to the James Harden Sixers, and then were an afterthought in a playoff race with the Eagles sizing up for what is thus far a perfect season.

I was at a lot of games during their push for a Wild Card spot, and this place was a ghost town. It’s absolutely mind-boggling to see how different this place feels with at least two more playoff games coming to town at the end of next week.

Most fans in the area thought they were just a “happy to be here team.” Here’s a toast to those who believed they were contenders all along. Philadelphia is eight wins away from being a World Series champion again. What the heck is happening?!

• As for their foes to be in the NLCS, the Dodgers have their hands full with the Padres right now out in California, trailing them 2-1. The teams play later Saturday night. It’s really a pick your poison situation as both teams are really loaded up and down the lineup and on the mound. Interestingly, the Phillies won the season series’ against both Southern Cali squads 4-3 this season.