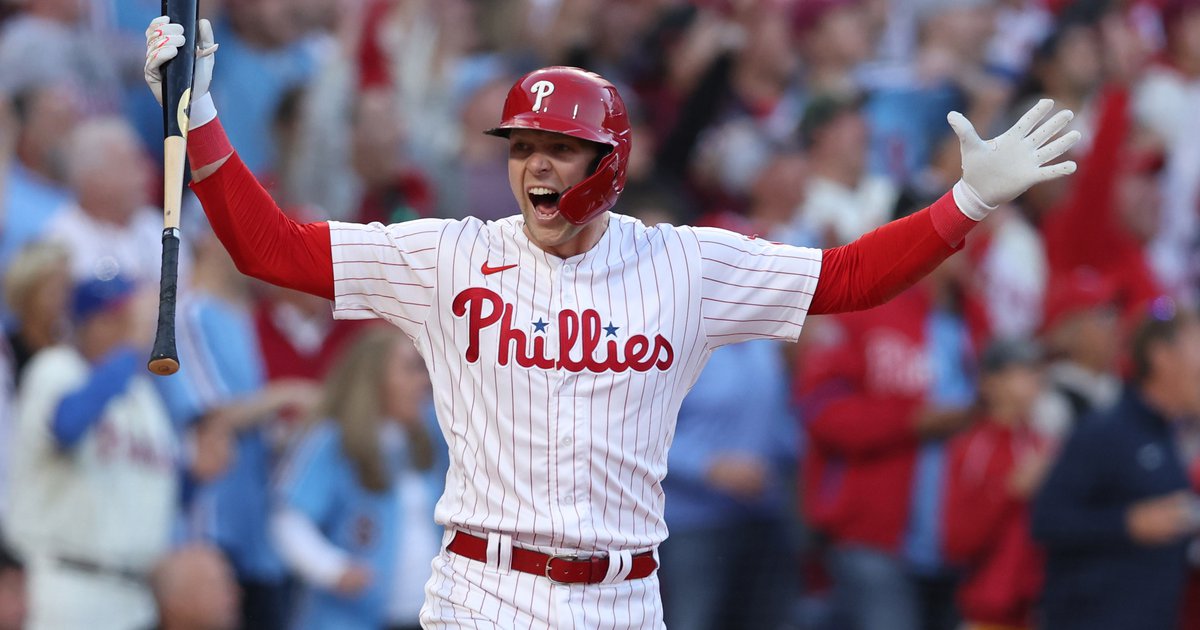 It’s as if something that was dormant for 11 years exploded back into existence at Citizen’s Bank Park Friday afternoon.

For years, Phillies fans were unmotivated, indifferent and endlessly pessimistic about the franchise which had not long ago been the standard bearer in the city for excellence and sports success.

And then Shane Victorino tossed the first pitch at a playoff game in South Philly since he himself prowled centerfield. And then Rhys Hoskins hit a three-run homer and the crowd went so crazy that cars on I-95 (probably) were hit with a wall of sound.

The Phillies won 9-1 Friday and lead the NLDS 2-1, with the chance to clinch Saturday afternoon at home.

Here’s what we saw in a throwback win for the ages:

• The Phillies looked overmatched heading into the third inning when by some struck of luck, Spencer Strider put Brandon Marsh on with a four-pitch walk. An inning earlier it would have been unfathomable. He looked like Randy freaking Johnson slinging 100+ MPH fastballs by hitters.

The Phillies go 6-up, 6-down vs. Spencer Strider in the first 2 innings.

They’re now 7-for-80 against him this season!

But then  the walk happened. A two-base throwing error and stellar at bat from Bryson Stott worked a double to left field and got Philadelphia on the board 1-0.

• I wrote an entire section in the second inning about how Rhys Hoskins should be benched (he did start 0-for his first four playoff games after all) — but there weren’t really any other options at first base. And then he crushed a three-run homer and flipped his bat with authority (or I guess spiked it like a football?) to get a considerably heavy monkey off his back and put the Phillies up 4-0:

The Phillies seem to be a team that takes it slow the with a starter and attacks later. That’s fine. Philadelphia fans are known for being patient…

Strider was chased from the game after 2.1 innings and the Phillies’ faithful were eager to wish him a fond farewell. And then Bryce Harper added two more:

• We’ll stick with Harper here for a second, as he continues to just mash the baseball this postseason. His RBI-double in the seventh put the Phillies back up by six runs and was his eighth hit of the playoffs. He is hitting .545 right now.

• One more shoutout to Nick Castellanos, whose two-run single right after Harper’s double off the wall put Philly up by eight He’s also had a really standout October hitting close to .417 himself through the five playoff games.

• The “can’t pitch late in the season” version of Aaron Nola is a thing of the past. Nola has been absolutely dynamic down the stretch, and pitched in the playoff clincher in Houston as well as the Wild Card clincher. In the last two pressure-packed appearances for Nola he’s kept opponents scoreless for 13.1 innings with just six hits allowed. He had 15 strikeouts to a lone walk prior to Friday’s Game 3.

He was every bit as good in his third postseason game, giving everyone watching an undeniable Cole “Hollywood” Hamels playoff vibes. Nola was lifted in the seventh after giving up a single, his fifth hit of the night for Jose Alvarado to face a lefty. The Phils’ ace struck out six and mixed pitches exceptionally well, using his curveball with particular proficiency. His lone run was unearned. He won’t pitch again until a potential NLCS start.

• Some quick props to the bullpen — particularly Alvarado — for not making this game messy. There weren’t a ton of high leverage spots but this is a city that has dealt with some putridly bad relief pitching units in recent memory.

• Okay, so I was going to give Hoskins his due — he got out of Philly sports jail with his three run homer. But he might be back under house arrest, at least defensively, after he made yet another blunder on what should have been a very simple double play in a key spot in the sixth inning.

Hoskins didn’t pick it cleanly off the dirt, and one at bat later the Braves got on the board thanks to a Michael Harris II base hit. Win or lose here in the postseason, Hoskins’ future with the Phillies is murky at best. This team might be an All-Star first baseman away from being a serious World Series contender next year too.

• This is not ugly. But my colleague Kyle Neubeck, who writes in this format on a daily basis typically uses this last section for anything that is miscellaneous. I have been a lifelong Phillies fan (at least prior to working in media). I was at Game 3 of the NLDS in 2007, one row from the chain fence in the 400 level. I was at City Hall on October 29, 2008 when the Phillies won the World Series when I was a junior in college. I fell in love with sports and aspired to be a sportswriter in large part because of this organization, which allowed me to get a tour of the ballpark and meet Scott Franske as a part of their college media day.

I get to come here for work, and get paid to do so and having never covered a playoff baseball game in a professional capacity, tonight’s game was incredibly special. I’ve never heard a crowd of 45,000 people go silent in between pitches and then nearly make me go deaf after an out is recorded. It was electric, and long overdue and I am grateful to our readers for giving me the opportunity to do this job.