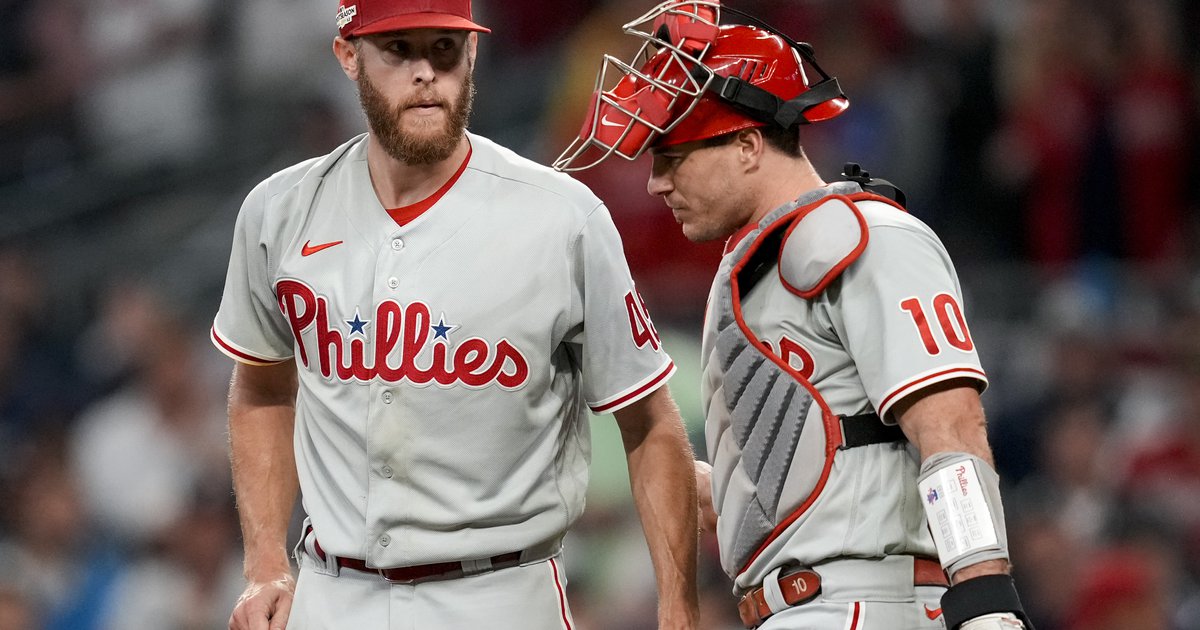 The good times came to an end — or at least a pause — in Wednesday night’s NLDS Game 2 as the Phillies’ offense fell flat and one unlikely rally lifted the Braves to a 3-0 win and a 1-1 series tie.

Despite their inability to recreate their Wild Card Game 1 heroics in the ninth, the team did pull off a split of the two games in Atlanta, and they take home field advantage with them to Philadelphia where they’ll host Game’s 3 and 4 on Friday and Saturday.

Before a day off Thursday, let’s take a look at the good, the bad and the ugly from a forgettable first playoff loss for the Phils:

• Zack Wheeler threw 50 pitches through five innings and was absolutely incredible for the first half of Wednesday night’s game. But for whatever reason, he could not get the third out in the sixth leading to his exit after 79 pitches (we’ll get into that below).

Wheeler overall has been really good against the Braves, his hometown team, in his career. Prior to this — his second ever playoff start — Wheeler had 24 career starts vs. Atlanta (the second most of any team he has faced) and is 10-7 with a 3.16 ERA. It was really looking like another one of his dominating performances against this NL East foe.

• The offense did not resemble the same unit it was in Game 1, but don’t blame Bryce Harper for that. The Phils’ slugger went 3-for-3 in their 7-6 win to open the series, had a double in the second inning in Game 2, and was pummeling the ball in every at bat.

Harper missed just about two months with his broken thumb and after returning he didn’t fully resemble his dynamic self as the Phillies had a few hiccups before clinching a playoff spot. It looks like whatever was causing his issues back in September is not a problem anymore.

• I’m going to bury this here at the end of our good session but John Smoltz is freaking fantastic. With no disrespect to Tom McCarthy and the Phils’ local broadcast team (which is the one I typically watch), Smoltz and partner Joe Davis (I guess he’s the new Joe Buck?) spoke really entertainingly and knowledgeably about baseball and pitching in particular.

I know there is some inherent bias as Smoltz was obviously an all-time great Braves hurler, but he was still really good. It’s rare that a broadcast team adds this much, Tony Romo and a small few others can do it, and I hope I can hear a lot more Smoltz calling the Phillies this postseason.

• The sixth inning wasn’t fun for the Phillies. After a two-out pitch drilled Ronald Acuna Jr. in the elbow — a walk, base hit and infield single and another base hit plated three runs to put the Braves ahead 3-0. Wheeler’s dynamic stuff was bested by small-ball — something the home run bashing Braves are not particularly known for — putting the Phillies into a hole for the first time since the Wild Card round.

Acuna was able to score the first run of the inning while keeping his injured elbow stationary, and he remained in game. Tough dude.

• We won’t overreact to one inning — but a leadoff double from red hot Bryce Harper led to no offense as a productive out from Nick Castellanos was wasted early in Game 2. Alec Bohm and Brandon Marsh failed to bring the runner home from third, a frustrating thing the Phillies have shown a knack for this season.

• The Phillies offense (or lack there of) continued to do pretty much nothing, with few opportunities and a lot of loud outs. One thing that is particularly troubling is the performances of the first two hitters in the order, Kyle Schwarber and Rhys Hoskins. The leadoff man and NL home run king went 0-for 7 in the first round and is 0-for-9 against the Braves. He had three strikeouts Wednesday.  Hoskins went 0-for-9 in the Wild Card round and is 1-for-9 so far against Atlanta.

• The Braves defense is pretty impressive. Created a few outs in this one that many teams would probably not have.

• Boy the strike calling leaves some to be desired in a lot of these games. When the ball is nowhere near the strike zone image on the screen, you can’t blame the hitter for taking the pitch.

The Phils should not be down on themselves for their vision with the ball tonight. It was really hard to adjust to the zone in this game and perhaps that’s one of the reasons it took so long for either offense to get going (though really neither truly did as there were just seven combined hits in this one).

• Kudos to the decision makers inside MLB for getting this game in. The weather forecast looked bad for the original 4:35 p.m. start — but the weather cleared up for the full game to be played to keep everything on schedule. Wheeler is still in sign to potentially make a Game 5 start if things go that far.

Phillies, down three runs, will lift Zack Wheeler at 79 pitches. Wonder if that puts him in a position to appear in a potential Game 5 on short rest.