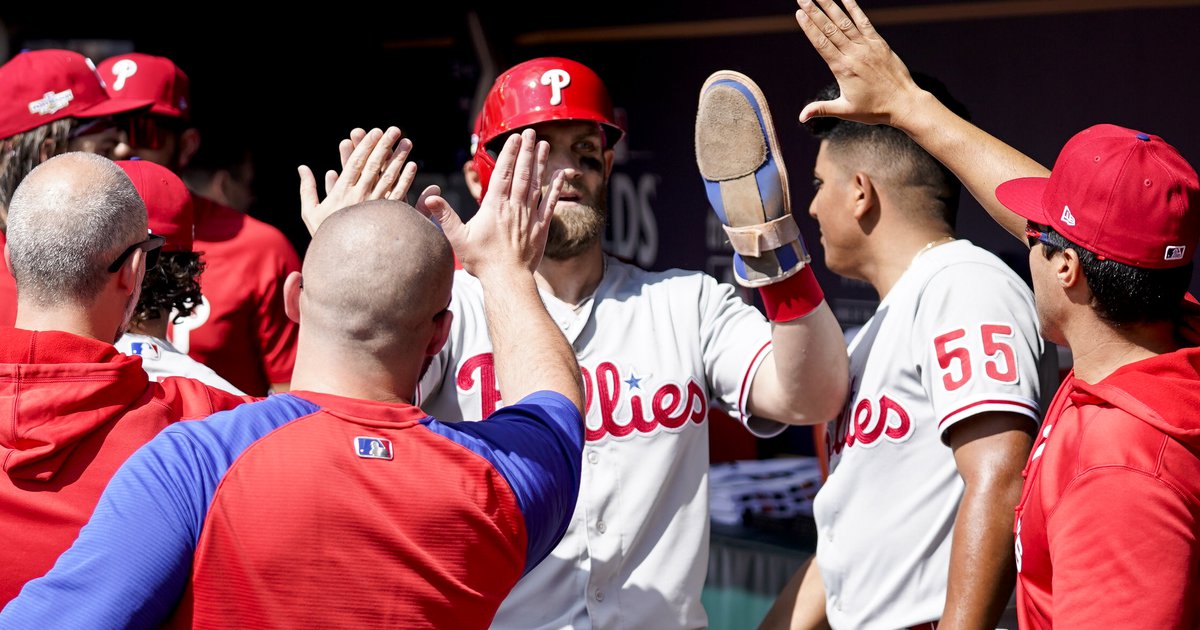 If there’s any time for the Phillies’ biggest bats to come alive, it’s now.

Rhys Hoskins finally notched the first postseason hit of his career, Nick Castellanos went 3-for-5 and drove in three in likely his biggest game as a Phillie so far, J.T. Realmuto is getting on and moving up with hyper-aware baserunning, and quietly – perhaps most importantly – Bryce Harper went a perfect 3-for-3 with a walk and a run scored after struggling for much of the last month and change of the season.

When the Phillies had runners on, they finally started making the most of it and piled on to beat the Braves 7-6 in Game 1 of the NLDS down in Atlanta.

They chased Max Fried away after six runs (four earned) in just 3.1 innings and took a 1-0 series lead to guarantee, at worst, a split coming back to Citizens Bank Park on Friday. Better yet, although the bullpen made things extremely close at the end, the heart of the order might finally be starting to click, and Harper especially may be on to something.

“I thought our whole lineup had a really good plan today against Fried,” Harper said postgame. “Timely hitting with two outs also. Just really, I think all around, I thought everybody did a great job, what a team win.”

Just a couple of days removed from the solo homer that helped clinch the Wild Card series over the Cardinals, Harper lined a single into left that set up the Phillies’ first two runs scored in the opening frame, both with two outs.

In the third, he moved Realmuto up with a sacrifice bunt, then was intentionally walked by Jesse Chavez in the fourth, again with two outs. Castellanos stepped up and hit a two-run single in the next at-bat.

“This is a very unselfish club, and that’s the way they’re playing,” manager Rob Thomson said. “We get ahead and they’re adding on runs…Our situational hitting was really good today, our base running was really good, taking extra bases and sac flies, I just thought we played a really good game overall.”

In the sixth, Harper launched a ball all the way to the wall in left-center, and in the ninth, ran out a ground ball sent back to reliever Jackson Stephens on the mound to reach first on an infield single.

Unable to play the field because of a partial UCL tear in his throwing elbow, Harper’s performance at the plate is vital to this postseason run, and across the two-game series against the Cardinals and Tuesday’s win over the Braves, the reigning NL MVP is 5-for-10 with a go-ahead homer Saturday and a double on Tuesday.

Small sample size? Sure. But a stark contrast to his struggles in September (when he hit .205 for the month) and then that short stretch in October (.158) since returning from a broken thumb.

As a former manager used to say, “It’s hittin’ season.”

And if the Phillies are going to take this run deep into October, they need Harper to fully embrace it and lead the way at the plate.

Game 2 is Wednesday at 4:35 p.m. ET down in Atlanta, with Zack Wheeler set to take the mound for the Phillies.

“We just gotta go out there and play our game,” Harper said. “Score the runs that we can and hopefully Wheels and (Aaron Nola) can shut the door and let our bullpen do their job as well.

“Just stay on them and keep going, understanding that if we go home 2-0, that’s a big advantage for us, especially going into the postseason in Philadelphia. So gotta enjoy this win today and get ready for tomorrow and finish the job.”