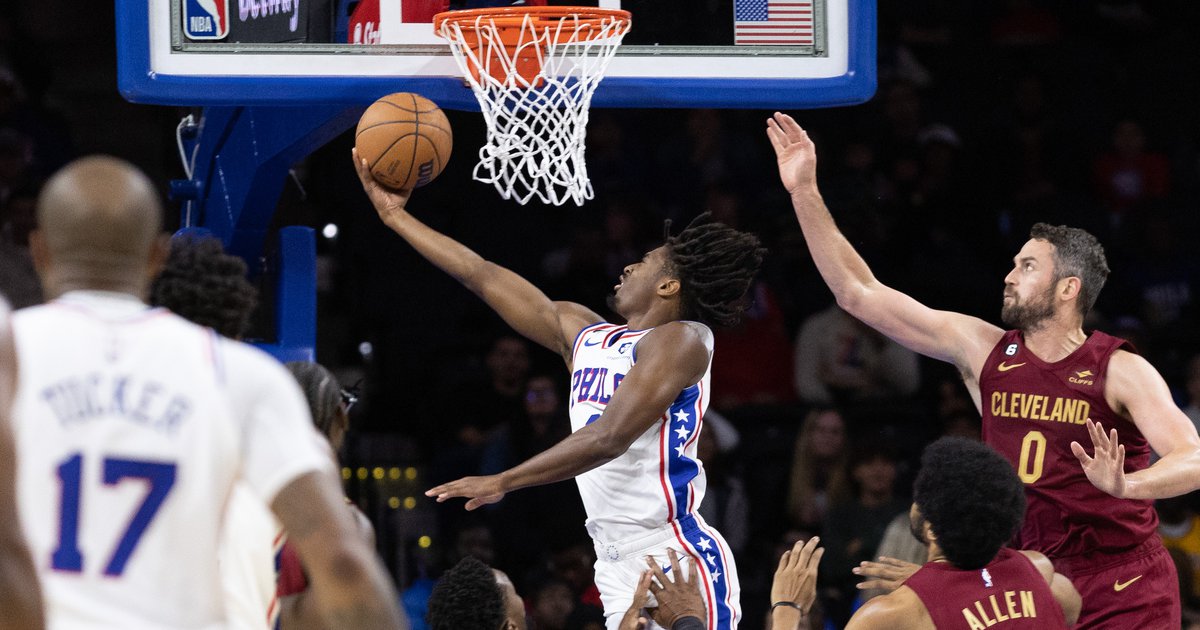 The Sixers made easy work of the Cavaliers without Joel Embiid, as Tyrese Maxey continued his scintillating preseason in a 113-97 win over the Cavs.

• Here I was thinking the lede for this game would center around Philadelphia’s small-ball starters, and here I am once again gushing over Tyrese Maxey and his play during the preseason. In all three games the Sixers have played during their exhibition schedule, Maxey has been the clear standout on the floor, and that’s for both teams. After torching the Brooklyn Nets in the opener, he has gone on to torch the Cavs twice in a row, proving near-impossible to guard as teams ease into their seasons.

The pattern is familiar by now: Maxey is set up for an early three, he rises, and he cans it. The Sixers are off and running, Maxey settles into a trailing position, and he cans a transition three. The opponent begins to fear the threat of his jumper, Maxey preys on that feeling of trepidation, and he’s by them for a look at the rim before they know what hit them. Watching him effortlessly split defenders and hit what feels like every single shot he takes doesn’t get old, and his maniacal efficiency in the preseason has been a delight to watch.

I don’t think Maxey shooting a million percent from three is sustainable — sorry to be Debbie Downer, I know — but his confidence playing out of a variety of situations couldn’t be more clear. And he’s being empowered by his teammates to go out and play as free as he pleases. The coaching staff is telling him to set the pace in transition, to hoist whenever he’s remotely open, and to simply be himself. With all that positive messaging heading his way, Maxey is crushing.

The improvement he has made in just a couple of years is nothing short of remarkable. The Sixers are going to end up owing Mike Muscala a lot more than what they paid him for his brief time here.

(Only 17 first-half points? For shame, young Maxey. We’ve come to expect 20+ during the preseason.)

• We’d seen bits and pieces of what the Sixers thought they were getting in De’Anthony Melton across the first two preseason games, but those performances were fairly uneven. This was basically a highlight reel of all his best features — Melton made the Cavs feel uneasy with his pressure defense and length in passing lanes, and he was decisive in both half-court and transition on offense. Melton’s tempo was a big part of the Sixers getting out to an early lead, the former Grizzlies guard often spearheading breaks and sucking in pressure before finding an open teammate.

He just feels like a guy who will connect the guys he’s on the floor with on both ends. Melton made several passes where the ball barely hit his hands before he was ready to fire it crosscourt in search of an open three. Philly didn’t always capitalize on those passes, but over time those reads will pay off.

Melton’s success playing alongside the James Harden/Maxey backcourt is part of why I’ve been intrigued by the idea of rolling with that three-guard group more often. That said, it’s probably enough that he looks at home playing next to either one of those guys, as it allows the Sixers to have a competent, even very good backcourt at basically all times depending on how they stagger things.

He was not the only off-season addition with a strong performance. Danuel House Jr. surpassed expectations as a glue guy on the wing, canning a pair of threes in the first half while also showing just enough off-the-dribble juice to recycle the offense and keep the Cavs scrambling. His interplay on a first-half possession with Georges Niang did not lead to a made Niang three, but with Cleveland trying to keep the play in front of them, Philadelphia ended up with an offensive rebound and would eventually score second-chance points.

• I still don’t see the James Harden of old that everyone has been hoping for. I don’t think that guy is coming back, personally, but I am also not going to crush anyone’s dreams if you’re holding onto hope. But I do think you’re at least seeing some promising signs from him when he’s looking to score, as the playmaking instincts/talent are abundantly clear.

In the third quarter, Harden had Jarrett Allen switched onto him at the top of the key and it felt like a perfect moment to test where he’s at right now. Advantage Harden: No. 1 went by the big man to his dominant left side and rose up for a layup at the rim Allen didn’t get all that close to. It’s the sort of play Harden used to make a ton of money (and score thousands of points) during his prime, and it’s what you want to see more of this season.

The reads and his passing are still as good as they’ve been for most of his career. Harden can find guys at basically any spot on the floor, and the Cavs’ respect for him as a scorer allowed Harden to spray passes to corner shooters repeatedly throughout the game.

• Three made threes for Matisse Thybulle in the same game qualifies as a massive success, and they came after what has to be said was a brutal start from deep: Thybulle airballed a wing three early, and you had the “Here we go again” feeling wash over you. Shaking that off and building some confidence is a good sign for a guy who hasn’t yet proven his offseason work will amount to a noticeable improvement.

To me, the big question is whether he should be in the rotation when everybody is in the lineup and healthy. That might seem crazy to his boosters, but Melton does most of what he can on defense while actually being able to dribble and pass, and House is a better shooter who can at least be trusted on straight-line drives, and after that, you’re looking for him to compete with guys in more specialized roles.

If Thybulle regularly makes threes, he’ll be an easy guy to lock into the rotation. But his usage in the preseason suggests he’s lower in the pecking order than guys competing for minutes on the wing, so no one is taking those shots as a given.

• We finally got a look at Philadelphia’s small-ball lineup with Tucker at the five, and even though I understand the section this is in, I did think their defense was mostly good. There are kinks to work out, but they look like a group confident and capable as they pass off switches, and they’ve honestly done a pretty good job of identifying which matchups should be a no-go. It was rare to see, for example, Tyrese Maxey lined up against a big. That is probably the most important thing we saw in this game, full stop.

That said, a couple of potential issues:

Maybe I’d feel differently about point No. 2 if Harden’s handle was a little less sloppy, because he had a couple of giveaways in the first half that were more about handle tightness than explosion. I still think the small lineup has a lot of merits and hope to see it fairly often, but it’s early days for that configuration.

• What I’ve liked about Tobias Harris during the preseason is how he’s playing stylistically. There have been a few “record scratch” moments for the veteran forward, but by and large he has played how everyone has wanted him to. Harris is moving the ball quickly, firing open shots with zero hesitation, and (on the surface) accepting a role as an occasional priority rather than a true focal point of the offense.

He is going to have to make some of these shots, though. The kudos for his buy-in will not last long if the buy-in does not lead to tangible results. Harris knows that better than anybody.

• I don’t think it’s a good sign for Charles Bassey that he couldn’t get on the floor on a night when both Embiid and Montrezl Harrell were out. This was about as clear a showcase opportunity as you could ask for, and it never came to fruition.