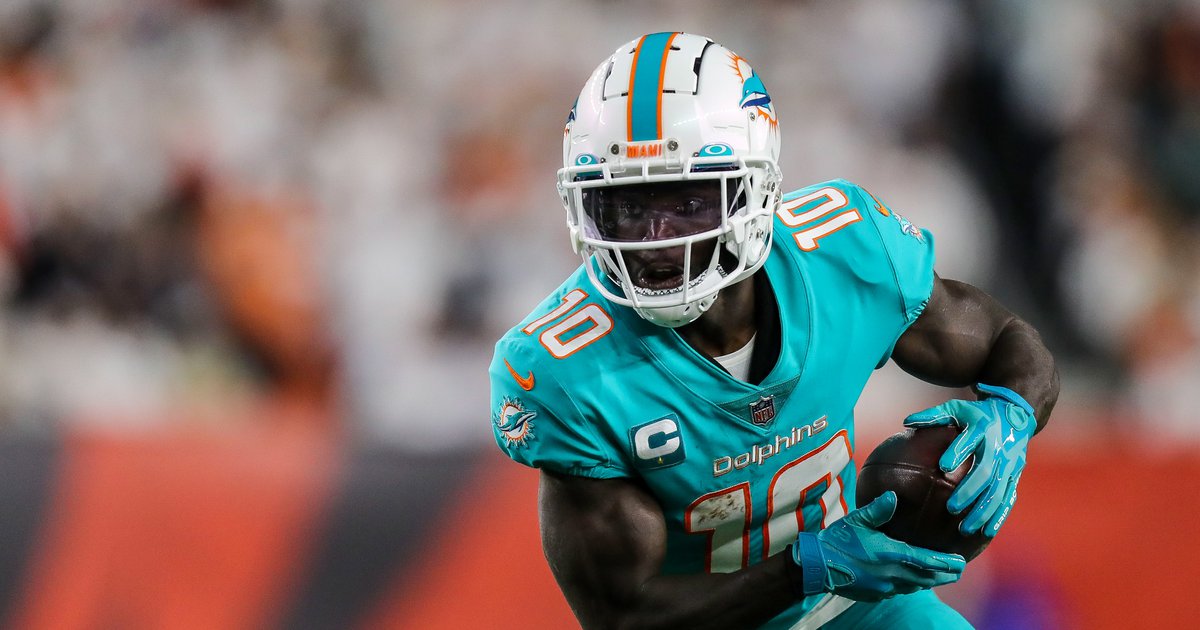 The NFL’s infirmary ward is getting bigger and bigger and fantasy football enthusiasts are starting to suffer more and more this season, as a large crop of stars sustained injuries in Week 5.

In addition to key players already not suiting up like D’Andre Swift, Jonathan Taylor, Kyle Pitts, Jameis Winston and more, the players we’ll touch on below may also be missing some games. This is the time that separates the cream from the crop amongst fantasy managers.

Here’s a look at the latest fantasy injuries and what we currently know about each:

The fact that the Fins’ stud wideout was seen in a walking boot following their loss to the Jets is not the best sign, but the team is still saying it is not a serious injury. He was stepped on toward the end of the game, and with a quad issue already hampering him, Hill will surely be questionable throughout the week.

It appears Higgins re-aggravated an ankle injury that he tried to pay through Sunday, but was not able to get back into the game. He’ll be in the questionable camp all week and his status in practice will give us more info as thing progress.

Harris left after four carries with a hamstring injury and did not return for the Pats. If you have Rhamondre Stevenson, rejoice, as he was (and could remain to be) in line for a massive workload for as long as Harris is absent.

It’s another rib injury for Conner, who is already a little banged up. He did not return after getting hurt in Sunday’s loss to the Eagles, but the team says he is “OK.” Whether that means he’ll suit up in Week 6, or Eno Benjamin is the RB1 for the game is yet to be seen to keep an eye out (Darrell Williams also got hurt in this game).

Penny broke his tibia and it appears that he’s in line to get surgery. He could miss serious time. This might open things up for rookie Kenneth Walker III.

New Orleans’ star rookie left with a concussion Sunday and did not return after a third quarter touchdown catch. The Saints’ receiving corps can’t seem to catch a break this season. Keep an eye on things this week with a lot of question marks in the WR room.

London suffered an ankle injury late against Tampa after a disappointing showing. Because his injury was at the end of the game there isn’t a ton of info out there so pay attention to how much he practices.

Wilson hasn’t exactly looked great of late, so the news that he’s been playing through a partially torn lat in his shoulder comes as little surprise. He reportedly got an injection after his Thursday night game.

Here’s another starting QB who has disappointed in Mayfield, who left Sunday’s game in a walking boot. PJ Walker took snaps at quarterback at the end of Carolina’s blowout loss, and Sam Darnold could be back from IR. It’s quite hazy right now, so steer clear of the Panthers this week if you can.

Yet another QB controversy in Miami, Bridgewater left in the opening series with concussion symptoms but would have been allowed to return, had the NFL not changed its protocols following the Tua Tagovailoa debacle. We’ll have to see who lines up under center next week for the Dolphins.

A concussion knocked Freiermuth out of the game in the third quarter after just two targets. He’ll be in the the protocol this week.

With the Pats offense already thin with depth, Agholor had one target, no catches and a late hamstring injury Sunday. He’ll be someone else to watch in practice this week.

Hines left Thursday night’s game with a concussion, a disappointing development considering he was starting for the injured Jonathan Taylor. Both Hines and Taylor have 10 days to heal up, and both could be back on the field in Week 6.

Watson had a lone target for Green Bay before a hamstring injury knocked him out of the game. He’ll likely be questionable this week.