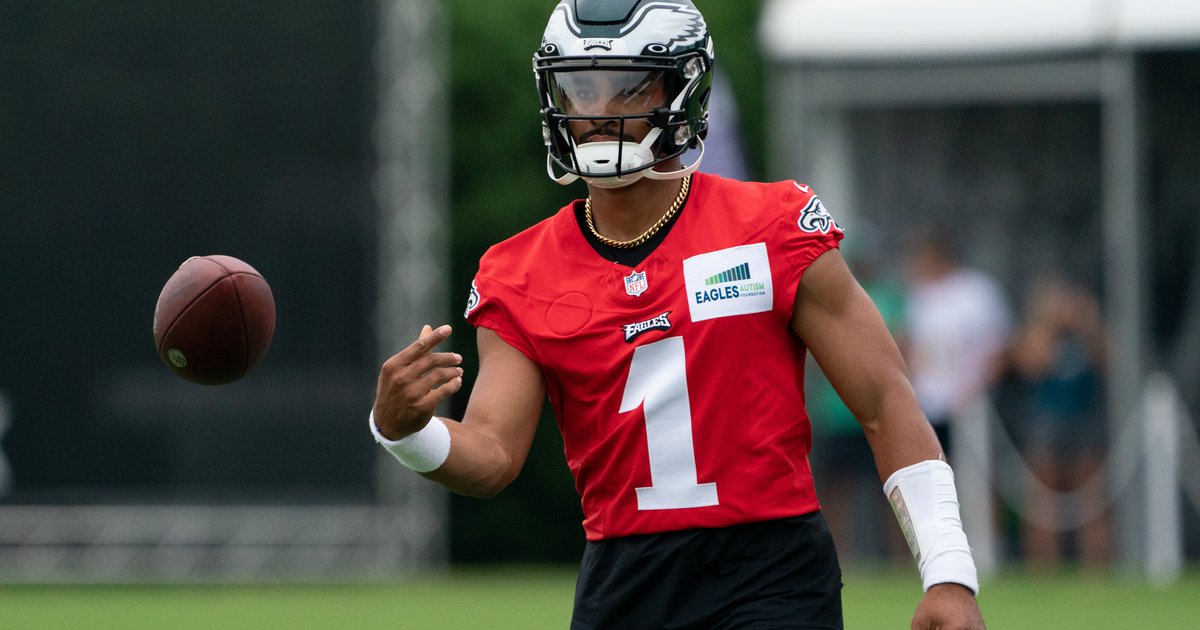 It was the hottest day of Philadelphia Eagles training camp down in Miami Gardens, Florida, where the Dolphins hosted the Birds during joint practices. Let’s just get right to the practice notes.

The good news is that Bradberry is back practicing again, even if he’s only limited for now. Grant Calaterra was also a full go.

The bad news is that Sanders remains sidelined with his hamstring injury. Remember when he had a hamstring injury to close training camp in 2020, and everyone assumed he’d be good to go for Week 1 against Washington, and then he… wasn’t? We’ll see soon enough if that will happen again this year, I suppose.

We may also soon see Darius Slay on the injury report tomorrow. On the first rep of the day, in 1-on-1s against Tyreek Hill, Slay got dusted down the sideline by the speedster, and seemed to pull up at the end of the play with a pulled muscle. He limped back to the sideline, but later returned to the field.

Later in practice, Slay once again limped off the field, this time seemingly favoring either his foot or ankle.

• The Eagles’ offense conducted 11-on-11’s on the far field, while the defense practiced right in front of the media from the sideline bleachers. As such, it was a little easier to see the defense today, but I did my best to watch both fields.

With that disclaimer in place, if Jalen Hurts completed a pass more than 15 yards down the field today during 11-on-11s, I didn’t see it. Checkdown city. Hurts seemed willing to give his wide receivers chances of making plays on the ball down the field last week in joint practices against the Browns, who were missing starting corners Denzel Ward and Greg Newsome. On Wednesday, with better corners patrolling the secondary, Hurts took fewer chances with the football.

Hurts verdict: It has been a while since Hurts has thrown an INT in practice, and that’s great! Today was a snooze fest from the first-team offense, though. You would certainly like to see the quarterback try to push the ball down the field more than he did. 📉

On the other field, Tua Tagovailoa was connecting on throws to all areas of the field, and the ball rarely hit the ground. While I believe that Hurts is the better overall player, Tagovailoa was a much better passer today.

• There were a lot of penalties today, and I believe the Eagles were called for offensive pass interference on one. It was a play in which receivers were blocking down the field on an RPO, and they engaged with defensive backs while the ball was in the air.

In the game against the Browns, Cam Jurgens was called for an illegal man downfield penalty when he was blocking too far down the field on an RPO.

If you’ll recall, those types of penalties negated a bunch of positive plays last season. There’s still some work to be done on the timing of the RPO game.

• I thought the best player for the Eagles today was Haason Reddick. He had two speed rushes around the edge today that resulted in sacks, but his highlight of the day came on a rush though the A gap. Reddick was lined up in a Joker position, and after he blew right through the line, he steamrolled running back Salvon Ahmad on his way to the quarterback. Reddick looked fast and physical today.

• One of Reddick’s backups, rookie Kyron Johnson, also played with some juice today. He gave some of the Dolphins’ offensive tackles problems with his speed, and was buzzing around in the backfield quite a bit today. He forced Teddy Bridgewater to step up into the pocket on one play, where Tarron Jackson was there to clean up on the sack.

• A couple of tight end notes:

• Davion Taylor was having an encouraging camp, but if we’re being perfectly honest he was horrendous in the second preseason game against the Browns. Today, a ball was thrown just over his head that I thought he should have intercepted. It went through Taylor’s hands in into the arms of a Dolphins receiver. I don’t think Taylor’s roster spot is in serious jeopardy, but he cannot play on Saturday in the final preseason game in Miami the way he played Sunday in Cleveland.

• Marvin Wilson is going to be a tough player to cut. He has stood out often enough through camp that if the Eagles didn’t have five interior defensive linemen ahead of him, he’d have a good chance of making the team. On one 11-on-11 play, a back tried to hit a hole in the middle of the line, But Big Marv got two big paws on the back’s shoulders, and threw him to the ground.

• If I had to project the Eagles’ No. 1 returners heading into the season, I was say that Jalen Reagor is the top punt returner, and Quez Watkins is the top kick returner. That’s how it has been for most of this camp, and that’s how it was today.

I know that some fans do not want to see that about Reagor, but I think he has done a solid job catching punts this summer, and barring a trade, he is going to make the team, while Britain Covey (second on the punt return depth chart) probably will not.

Meanwhile, Watkins got eight kick return opportunities last season, and they didn’t go well, as he averaged just 17.3 yards per return. It should be noted though that he was also a starter in 2021, while this year he is more of a co-WR3 alongside Zach Pascal. He has gotten more kick return reps this camp, and should be able to improve on that kick return production (or lack thereof).

• There were no fights between the Eagles and Browns last week, but we had one today. Landon Dickerson gave Dolphins edge rusher Jaelen Phillips a little extra through the whistle, and Phillips went to the ground. With Dickerson having turned his attention elsewhere, Phillips then got up and put his whole body into a hockey-like check of Dickerson, sending the big man to the ground. A crowd formed, but was quickly broken up.

To note, Phillips wore an orange jersey today, while the rest of the team wore their light blues. The Dolphins have a new tradition that I like in which one player each day gets to wear the orange jersey if they are coming off a stellar practice. That player also gets to pick the music playlist for the day.

• Throughout training camp, I’ll have occasional one-on-one interviews with Eagles beat writers / other media folks while the players are stretching and doing other boring stuff, as well as our regular post-practice podcast recaps. Today I talked with NBC Philly’s Dave Zangaro. Oh, and here’s the iTunes link. Review, subscribe, etc.

The predictions so far: