John McMullen: Philadelphia talking about practice way too much 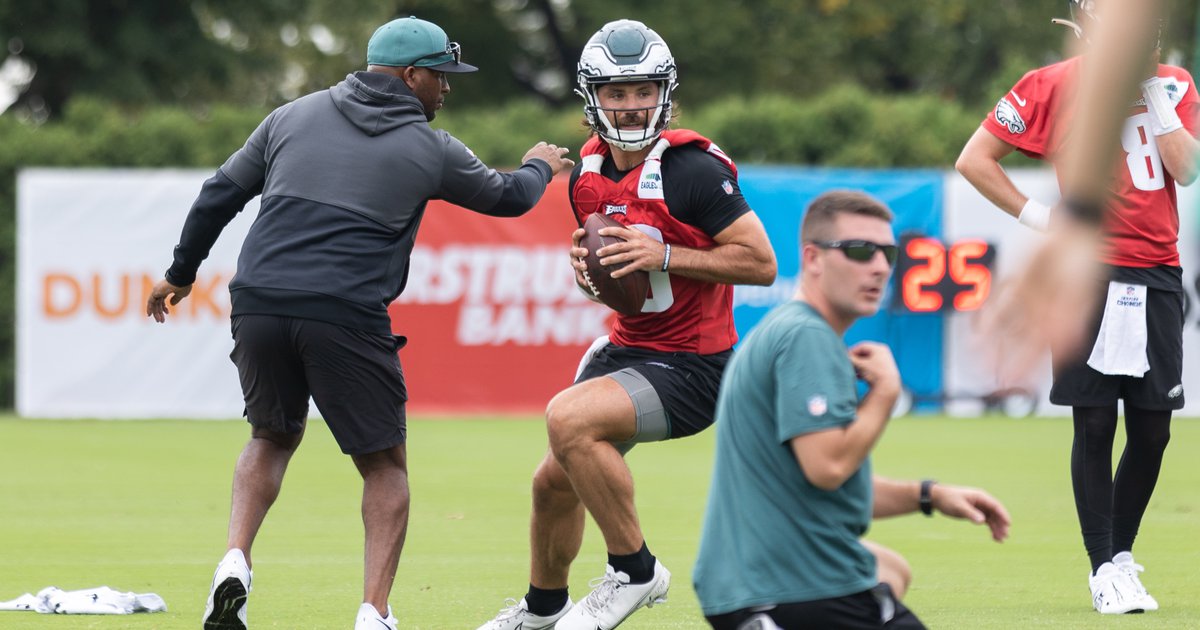 Allen Iverson is part of any sports zeitgeist, not only for his Hall of Fame career on the basketball court but also for his infamous practice rant off of it.

It’s been over 20 years since Iverson was taken out of context by most after downplaying the importance of practice.

“We talkin’ ’bout practice! Not a game!” is all that most remember.

For those who don’t know, Iverson was actually frustrated over the murder of his friend Rahsaan Langford and was essentially publicly grieving. A 35-minute back-and-forth, however, quickly turned into quick audio and video clips forever dismissing the importance of something that helps build the foundation of any successful team.

What is missing for most, though, is the fundamental understanding of what’s trying to be accomplished during practice, something Eagles coach Nick Sirianni explained in Berea, Ohio last week during Philadelphia’s two joint sessions with the Cleveland Browns.

Winning is never the goal, the work is.

According to most Philadelphia scribes, Sirianni remains “undefeated” in joint practices after getting the best of the Browns in a pair of sessions in advance of Sunday’s 21-20 win in the actual practice game where few starters played for either side.

To Sirianni’s credit, the coach downplayed his mythical title after a “close” Thursday session in which some gave a slight edge to Philadelphia and others deemed a draw, meaning the belt stays with the champ.

The rematch on Friday was heavily titled green. The Eagles then finished off the mini-series with a 21-20 actual win in a game that doesn’t count thanks to a Reid Sinnett home run to Olympic hurdler Devon Allen, which was admittedly fun.

For whatever reason Philadelphia had not let up the reins on the speedster this summer and watching Allen cripple a Cover-3 look with a simple head fake on former Eagles’ hopeful Lavert Hill, coupled with the safety biting underneath was a classic example of speed kills in the NFL.

“He’s that fast, for sure,” backup QB Gardner Minshew said of Allen. “I think everybody in the world knows that. He’s a world record holder for a reason. We were all just so fired up for him to get that. And Reid put a perfect ball on him.”

None of that really mattered to Sirianni from the Day 1 draw to the “nail-biter” at Baker Mayfield’s former abode.

That’s the only “win” the Eagles coach wanted after an extra long weekend in Cleveland.

A team source explained that the Browns were a good test for Jonathan Gannon’s defense because Kevin Stefanski is essentially running the Mike Shanahan/Gary Kubiak offense which is heavily reliant on a play-action passing game built on a fabulous running attack with two top-tier backs in Nick Chubb and Kareem Hunt.

Through 12 practices and four walkthroughs at the NovaCare Complex, the Philadelphia defense was working against an offense intent on sharpening up the passing game first and foremost with a different philosophy based more on RPOs, half-field reads, and dynamic playmakers.

It’s also not lost on the staff that the Eagles’ first two games in the regular season – at Detroit and vs. Minnesota – are heavily reliant on similar schemes as Cleveland with savvy play-action quarterbacks in Jared Goff and Kirk Cousins, the latter of which was coached by Stefanski with the Vikings.

Inward practice is also often about trying things and pushing the envelope.

From the Eagles’ perspective, they know they can run the football after leading the NFL in that category last season and returning perhaps the game’s best offensive line. They also have, likely, the best running QB not named Lamar Jackson in Jalen Hurts. So, Sirianni has been spending his summer trying to squeeze out every drop of potential production in what was an underwhelming pass offense last season.

When the coach is back in a game environment, it’s RPO heavy, something that Minshew, along with runners Boston Scott and Kenny Gainwell, proved adept at in the exhibition encounter.

“(Scott and Gainwell) were in there for so many plays. Running them over and over. It was good to see that toughness get rewarded, and for them to stick it out and get in there (the end zone),” said Minshew.

Hurts, meanwhile, spoke of the value of seeing a different look in the practices.

“We talked about it as an offense all the time,” the QB1 said. “You run your stuff against our defense, the defense begins to pick up on what you do. You see the same looks all the time. So you get a different picture out there and know that your stuff is still executed at a high level.

The highlights that fans yearn for are inconsequential.

You can whisper that was even better than A.J. Brown’s Moss-ing of a hapless defensive back in Berea on Friday:

Allen’s dusting of Hill was also cool but guaranteed forgetful by Sept. 11 in Detroit.

You may be old enough to remember Tom Brady arriving at NovaCare and carving up the Eagles’ secondary into a cloud of expletive-filled rants escaping off into the ether, the single most impressive football practice this writer has ever seen. Or when then-Baltimore rookie receiver Darren Waller showed up as a king-sized 50-50 ball machine, a foreshadowing of things to come in Oakland and Las Vegas as a tight end.

Philadelphia still got better in “losing” those sessions, though.

My thoughts of practice always drift to the pre-pandemic world when spending way too much time in a newsroom. It was there where one encounter stuck with me, a young statistician living and dying with every pitch of spring training baseball.

It was mesmerizing and also a little bizarre from the prism of the cynicism gained by being around professional sports for far too long.

Whether it’s the ace pitcher in the Grapefruit League giving up dinger after dinger while working to add a cutter to his repertoire or Smokin’ Joe Ostman playing the role of the iron sharpening a talented lump of clay shaped like Jordan Mailata on a daily basis for years, we’re talking about practice.

The cliche says practice makes perfect, but certainly not for many watching who need a better understanding of why repetition leads you closer to the impossible standard.

John McMullen is a contributor to PhillyVoice.com and covers the Eagles and the NFL for Sports Illustrated and JAKIB Sports. He’s also the co-host of “Birds 365,” a daily streaming show covering the Eagles and the NFL, and the host of “Extending the Play” on AM1490 in South Jersey. You can reach him at jmcmullen44@gmail.com.