Eagles C Cam Jurgens has another impressive showing against Browns 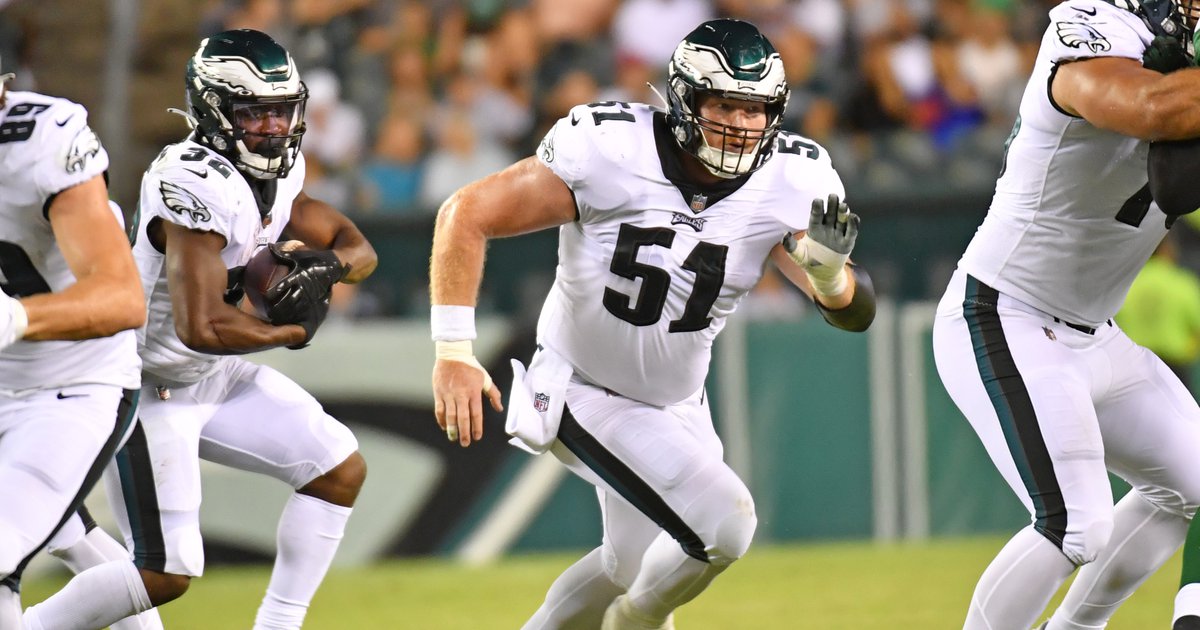 Everyone in Cleveland knew Cam Jurgens was on the field from the word “go,” especially Browns safety D’Anthony Bell.

On the very first play of Sunday’s 21-20 preseason win, the Eagles’ rookie center shifted right off the snap and started moving downfield. Running back Boston Scott tailed behind.

Bell, an undrafted free agent at 6’1″ and 211 lbs., stood in the way of 6’3″ and 303 at full speed. Jurgens put him on the ground immediately and Scott was free to run up the sideline for 13 yards and a first down.

It was only the start of another impressive outing for Jurgens, who has already been having a phenomenal camp and preseason thus far. He played the Eagles’ first two drives against the Browns, which both went for touchdowns heavily through the rushing attack.

His blocking had a lot to do with that.

From the moment the Eagles took him 51st overall in the second round of the NFL Draft back in April, Jurgens has been advertised as a near clone of Jason Kelce – even by Kelce himself – and this summer, he’s looked every bit the part.

On the Eagles’ second drive, Jurgens helped open up a gap through the middle for running back Kenny Gainwell, which he took right up the gut for a 10-yard gain on 2nd and 9.

Five plays later from the Eagles’ 45, Jurgens blew open a hole again, this time on the left side of the line, which Gainwell took for 16 yards on 3rd and 13.

Momentum carried the Eagles the rest of the way to the end zone, and by the time Jurgens was pulled in the second quarter for Jack Anderson, the offense had converted on two efficient drives of 76 yards and 75 yards, respectively.

“He’s super athletic, man,” said backup quarterback Gardner Minshew, who completed 14-of-17 passes for 142 yards in place of Jalen Hurts. “He’s also very smart. For a rookie to come in here and be making all the calls and doing all the things he’s doing, it’s super impressive.

“I’m very excited for his future and for him to just keep getting better.”

Sure, it’s only preseason, but between Sunday’s performance and a stellar debut against the Jets just over a week ago, the 23-year-old looks comfortable, confident, and seems to have retained every bit of the mean streak he had in college at Nebraska.

Probably helps a lot that he plays so similar to Kelce, is in an offensive system structured around Kelce, and has the man himself right there on the sideline while the veteran center recovers from elbow surgery.

“I feel like early on in practice, I feel like I belonged right away,” Jurgens said during camp at the beginning of August.

“Everybody in the o-line room is just so helpful. I try to sit next to [Kelce] and [Isaac Seumalo] as much as I can because those are the smartest dudes in there and they’re just really cerebral at explaining and teaching everybody in the room. Not just rookies, but it’s everybody. Everybody’s teaching and learning. It’s a great room to be a part of.”

And Jurgens is still learning.

While he put in a great game overall, he did make a glaring mistake on the Eagles’ second possession, getting caught too far upfield as an ineligible receiver on the second play of the drive.

Hey, remember, he’s a rookie, but a highly talented and promising one at that.

Okay, so Jurgens clearly made the best block of the day on play one.

But shoutout to Dave Spadaro, who made a serious case for it just before kickoff.

So much poise, so much fluidity.

Keep that one for the highlight reel.