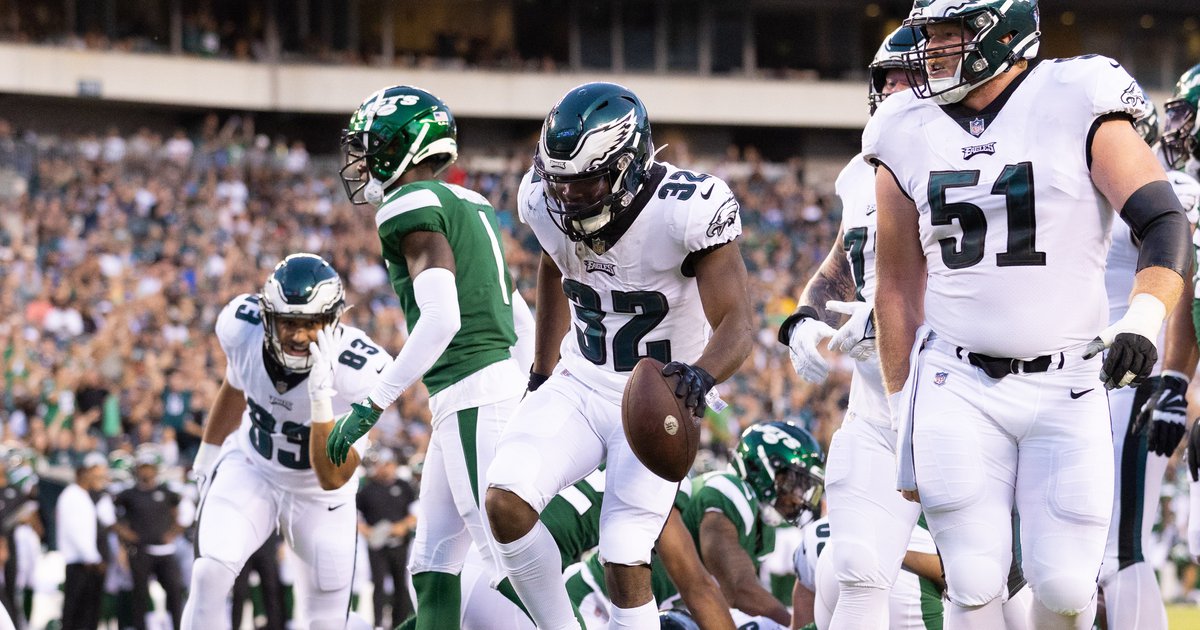 Live from Lincoln Financial Field… it’s Friday night! Earlier in the evening, I wrote my first-half observations from the Eagles’ preseason opener against the Jets, giving big praise to both Jalen Hurts and Tarron Jackson. After getting off to that 14-3 first-half lead, it went south for the Birds, ultimately losing 24-21.

• The Jets punt to the Eagles after their opening drive of the second half. Britain Covey gets the punt return, fields it, but doesn’t make anything of it and actually loses a yard on the play. He needs to flash here as a bubble guy to make the roster.

• Horrendous throw from third-string quarterback Reid Sinnett in his first preseason action. It should’ve been intercepted by Jets safety Isaiah Dunn. Nowhere to go but up!

• Sinnett lost a yard on a sack on the immediate next play. Guess there was room to go down…

• Third and six from the Birds’ own nine… Sinnett fires one to Covey with way too much mustard on it. It maybe could’ve been caught (Covey’s short height hurts him here), but not a great showing for either guy.

• On a first and goal-to-go situation the next time the Jets had the field, I saw some nice burst from Marvin Wilson. He blew up the right guard! Wilson was an undrafted free agent out of Florida in 2021 who spent most of the year on the Birds’ practice squad. Given how deep the Eagles are at defensive tackle, he won’t make the 53-man roster, but will be in the mix for the practice squad once again.

• Special teams juice! Jason Huntley, after rushing for a touchdown in the first half, has a 43-yard kick return. The inverse of Covey here where some return ability in the preseason can make or break a guy’s standing on the roster.

• Rough drop by Deon Cain on a downfield throw from Sinnett on that second offensive drive of the half. Cain actually pushed off on the play too and got away with it. The space he created on the push-off honestly might have given him a shot at the end zone. Cain spent 2021 on the Eagles’ practice squad.

• Jets wideout Denzel Mims with a drop wide open in the flat. Eagles fans might recall Mims calling Philadelphia a “dirty a**, trash a** city” in 2020. As I warned Mets announcer Keith Hernandez, it’s probably a bad move to come at Philly.

• Sinnett takes a 16-yard sack. As one might imagine when seeing a 16-yard sack, the dude held onto the ball too long. Sinnett, relative to expectations, has looked solid in training camp, pretty easily outplaying Gardner Minshew (obviously, Minshew is much better as an NFL QB). Not a banner night for him so far.

• With fewer than 30 seconds remaining in the third quarter, The Wave breaks out at the Linc. Preseason football, baby!

• Jets tight end Lawrence Cager, a converted wide receiver, picked up a 29-yard gain on a toss from Chris Streveler. Much like his teammate Zonovan Knight, another great football name.

• Cain was later held by a Jets defensive back on a deep throw down the right sideline from Sinnett. Nick Sirianni was in the ref’s ear immediately. This coach is going to get fired up for his guys even with fewer than six minutes remaining in a preseason game.

• JJ Arcega-Whiteside gets his first target of the game with under three minutes remaining. Drop.

• Training 17-14 just before the two-minute warning and facing a fourth and three at the Jets’ 15, the Eagles lined up to go for a field goal. It’s the preseason. Just go for it and give the fans that stayed this late a show. Maybe Sirianni heard me typing because the Eagles then called a timeout and threw the offense back out there. Nine-yard pass to Noah Togiai for the first down. Yes, I’ve played a lot of “Madden” in my day.

• Comeback kid! Sinnett rolls right and hits undrafted rookie free agent running back Kennedy Brooks in the flat for a two-yard touchdown. Eagles 21, Jets 17. If I was in the newspaper biz, I’d complain about needing to “rip up my recap” because of Sinnett bouncing back from his early struggles for a (potential) game-winning 18-play drive.

• The finish in this one was more heated than Buffalo-Kansas City back in January (kidding).