Best case, worst case: De’Anthony Melton can be a difference maker for Sixers this season 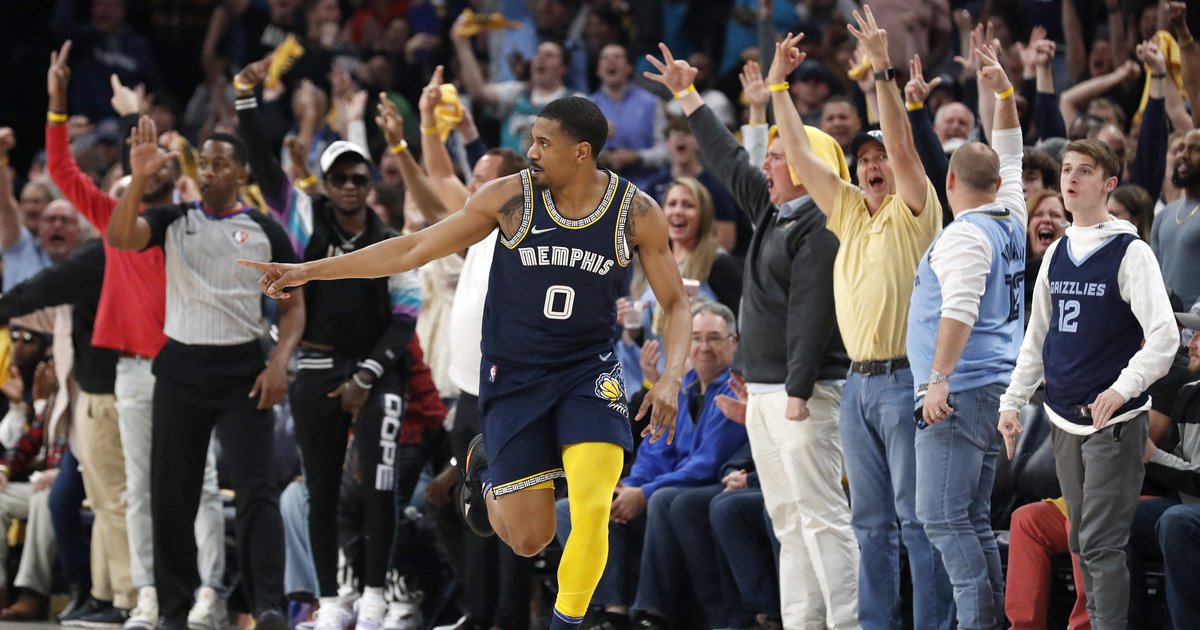 For years, the Sixers have been short on athletes, defenders and shot-creators in the rotation. Though he may lack a bit in the last department, De’Anthony Melton might be able to bring all three of those things to the table for Philadelphia, and can do so while his game is on the ascent. For the price of a late first and an injured Danny Green, that sounds like a hell of a deal.

Let’s dig in to Melton’s potential highs and lows this year.

Melton feels a bit like a forgotten acquisition as a result of the trade being agreed to on draft night. It sounds silly, but if the Sixers had made the exact same moves in free agency and then traded for Melton in mid-July, I suspect there would be a bit more buzz about the offseason they had. He’s good, he’s young and offers the Sixers versatility they’ve needed for years.

In some ways, Melton offers a dose of what you get from Matisse Thybulle without the downside. His defensive ceiling doesn’t approach Thybulle’s for a few reasons, starting with the size difference between them, but he’s a disruptive player in passing lanes who is going to punish moments of mental weakness from the opponent. Melton will help the Sixers create turnovers and get out on the break, and it’s just as important that he can actually do something with the basketball himself when he forces a giveaway.

Calling Melton a “1-3” defender exaggerates slightly in the same way “1-5” defenders can rarely ever guard centers. But even if you don’t want Melton as a full-time guy on bigger wings, he’s an excellent option against the vast majority of backcourt players and plenty of wings in the modern NBA. He will pair nicely with either member of the starting backcourt for Philly — you can stick Melton on whichever assignment is tougher when he shares the floor with Tyrese Maxey or James Harden, and you’ll feel good about doing so. Melton combines lightness on his feet with length and the ability to get around screens, which will help the Sixers stiffen up their perimeter defense.

Getting a guy who ranks near Thybulle in a lot of “disruption” categories on defense creates the potential for uber-defensive lineups that simply weren’t in the cards for Philly before. Put those two in the game and you have two of the quickest bandits in the league, and two guys who can ultimately clean up for the other when their counterpart gets a bit too aggressive. Having long athletes with recovery speed gives a team chances to dig out of holes (self-created or otherwise). Both players will likely benefit from playing off one another on defense, with the man on the weaker assignment having more room to gamble when they share the floor.

Melton brings a decent amount of offensive value as well, especially if the shooting progress of the last two years holds. Though his percentage came down from a scorching 41.2 percent in 2020-21, Melton increased his volume by a full attempt per game and still shot a respectable 37.4 percent from deep. What’s critical is that Melton’s catch-and-shoot numbers were excellent (40.6 percent) in 2021-22, and as the off-guard next to James Harden or Tyrese Maxey, those will make up the bulk of his attempts. Better still — Melton may not be the world’s most dynamic ball-handler, but he’s got the burst to get to the rim if/when teams respect his shot enough to close out hard on him.

I’m unsure how much Doc Rivers will actually go to a look like this, but a three-guard combination of Harden-Maxey-Melton gives you some juice off-the-bounce at several spots on the floor. Whether they’re operating through Joel Embiid in the post or a Harden pick-and-roll, the Sixers would only be one pass away from a credible shooter with the ability to beat a closeout and get to the rim. There should be a mutually beneficial relationship between the starrier players and Melton — the big dogs have another reliable option to help them, and Melton’s average shot quality should be high as a result of the attention being paid elsewhere.

A good Melton season in a fairly big role would provide the Sixers with far more options than they’re accustomed to having, and they become a much tougher team to defend with lineups that put several players on the perimeter who can knock down an open three or use the threat of the three to create an advantage situation off of the dribble. This team should feature a lot more instinctive, quick-read basketball thanks to the roster tweaks, and the better their offense is, the more often they can play halfcourt defense and extract maximum value out of Embiid’s gifts.

Two-way talent gives Melton a chance to be on the floor in crunch time, even if he’ll have some stiff competition for a spot on the floor. If the Sixers bring him in for a critical defensive possession, they don’t have to use a timeout in order to get a useful offensive player on the floor in his place. On nights where he has it rolling, Doc Rivers will have the option to simply leave him on the floor and save somebody else the wear-and-tear during the regular season.

Having a player who is borderline good enough to start but most often coming off of your bench is a potential problem as it relates to future retention, but it’s a boon for a team hoping to contend.

I’m here to tell you that Melton’s shooting is going to come and go at times during the season. He is a much better, more consistent shooter than he was during his first two years in the league, no doubt, but basically all role players go through funks that are infuriating to watch. Danny Green has made a living out of defending and almost exclusively hitting corner threes on offense, and there were moments during his time in Philadelphia where it felt like he’d never hit a shot again. When Melton’s shot isn’t going down, he’ll face the same scorn as many others, and you’ll wonder whether he deserves as much rope as he’ll probably have.

The problems are multi-faceted if his shots stop dropping. Melton’s growth as a shooter began with a retooling of his mechanics (specifically his base), and he has noted during tough runs of form that maintaining the proper form can escape him at times. That’s something easy enough to correct and work around over a long regular season, but when legs and minds get tired in the playoffs, you have to practice your best habits unless you want to get sent home.

The other concern if Melton’s shot evades him is whether it leads him to do too much in an effort to make up for it. Melton can occasionally bite off more than he can chew on offense, which is why most of his best minutes in Memphis came next to a ball-handler (Ja Morant, Tyus Jones, and so on) who would run the offense and take decision-making somewhat out of his hands. But there will still be moments when his confidence in self brings him to a spot on the floor or a shot opportunity that should be rethought, and those are more likely to happen when he can’t get spot-up jumpers to fall.

And if that shot doesn’t fall, mind you, a lot of the interesting bench lineups might end up being unplayable bench lineups. Though Melton would help give them a strong enough defensive base to work through their issues, we’ve seen time and time again that poor offense can ultimately undermine the strengths of a defense-first team/lineup. If the other team is always running, your halfcourt defense isn’t going to mean much.

Other defensive issues would be less about Melton’s own problems or limitations and more about what he might be forced to do within the team context. In a three-guard lineup, Melton may have to size up as one of the few credible defenders on the floor. He’s not a bad on-ball guy by any means, though it’s his work away from the ball that provides the most value. It’s going to take some time to figure out what the best combinations are for this group, and he may end up getting jerked around for a bit while that process takes shape.

An outright bad shooting season would obviously be the disaster scenario, though I do think Melton will find a way to offer value even if he comes crashing down after two strong seasons from deep. With youth on his side and another year left on his deal after this one, the Sixers have some time to figure out how to use him best.