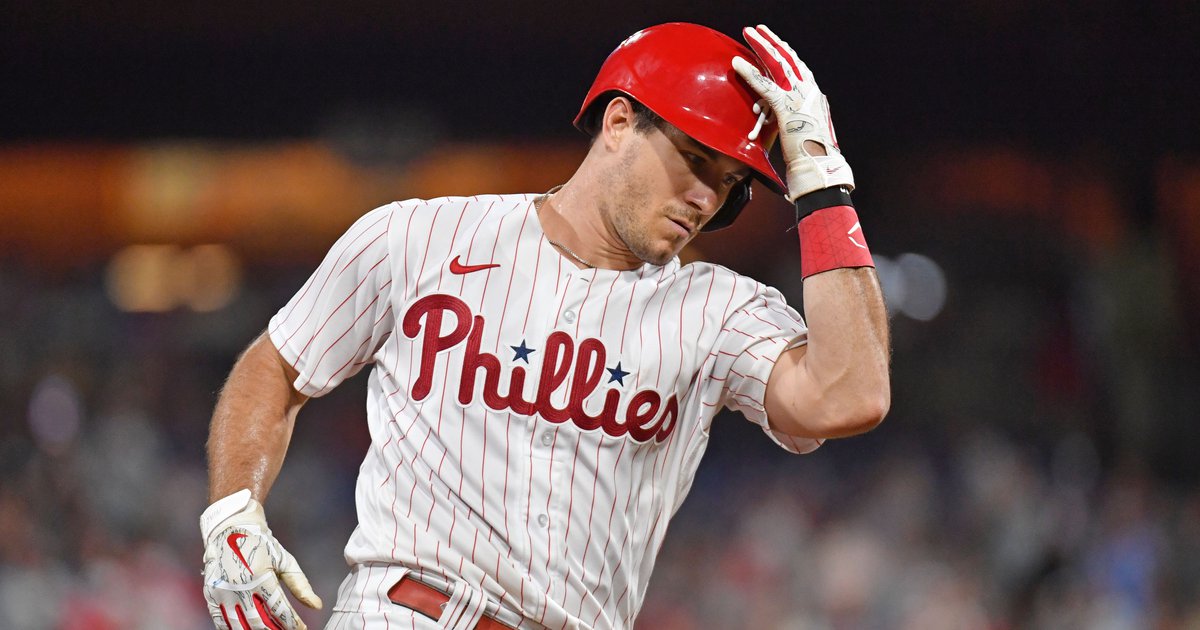 The Phillies’ seven-game winning streak came to an end on Thursday, but it’s been a hell of a run for a Phillies team doing the unthinkable: making a legitimate postseason push after a disastrous start to 2022. For this weekday series against Miami overall, the Phils took two of three games from the Marlins with their record now sitting at 62-49. It leaves the team, as of this writing, a half-game up on the Padres for the second Wild Card spot in the National League.

Since the beginning of July, Realmuto is hitting .344 with an on-base percentage of .394 and a mighty slugging percentage of .699. He came up huge in Tuesday’s 4-1 win, delivering a two-hit, two-RBI performance that included a huge fourth inning homer that gave the Fightins a lead they would never relinquish:

If this team can get Bryce Harper back in September… oh, boy.

Wednesday night’s win over the Fish is one this era of Phillies baseball has sorrily lacked: a big comeback victory. The Phils have been able to control games with its offense blowing the doors off opposing pitchers and creating insurmountable leads. It takes a different type of team, however, to squeak out wins in a playoff race and, hopefully for Phillies fans, postseason baseball.

Going down in a 2-0 hole early, the Phils began fighting back with a clutch double from Kyle Schwarber in the sixth to cut it to 2-1. An insurance run from Miami in the top of the eighth may have had the Marlins believing they were cruising to a win, but no so fast, my friend.

The Fightins responded with six hits in the bottom of the eighth, all singles, driving in four total runs to make things 4-3. Seranthony Dominguez finished things off with a 1-2-3 ninth inning.

“If they’ve shown one thing over these last couple of months, it’s that no game is over until the final out,” NBC Sports Philadelphia play-by-play announcer Tom McCarthy said after Thursday’s loss.. The man isn’t wrong!

This team just has a different vibe that sets them apart from the last decade of mediocrity.

Is all of Philly buying in though? Maybe not just yet…

2007 National League MVP Jimmy Rollins is a legend in Philly and his takes should always be respected. He’s amped for this rebirth of Phillies baseball, but he had some choice words for the crowds down at Citizens Bank Park:

This @Phillies team has IT!! It has taken some@time but they are here to WIN!! Still seeing too many empty seats at the Bank though 👀. Where are the sellouts that get the bank rocking and make Philadelphia the best sports town in the world?!!! #everybodyhits

He’s not wrong that attendance is light, but it’s also a weeknight, life is expensive and the 11-year playoff drought still looms large over this franchise. I’m banking on this Phillies squad making the postseason, but I understand any fan too skeptical to drop money and make the weeknight trip to CBP when a thousand other things are going on in our lives.

You’re not a lesser fan if you prefer watching games at home rather than at the stadium or arena. Before my “Big J Journalist” days, there was no sicker feeling than walking out of the Linc or CBP or WFC after a demoralizing loss and having to commute home. Nothing.

Seeing is believing, so if/when this club plays meaningful October baseball in South Philly this fall, I’m sure the ballpark will be overflowing with fans.

After reaching base on a walk in the fifth inning in Thursday’s loss, Schwarber was removed from the game. If it’s an injury, it’s not clear what the ailment is. With Harper still out, the Phils can’t afford to lose another power hitter, especially one of Schwarber’s caliber.

Some news on Schwarbs. Could be worse I guess?

A hugeeeeeee three-game weekend series in Queens with the Mets is coming. First pitch is at 7:10 p.m. on Friday on Apple TV+ (yuck). Here are the probably pitchers for the games: