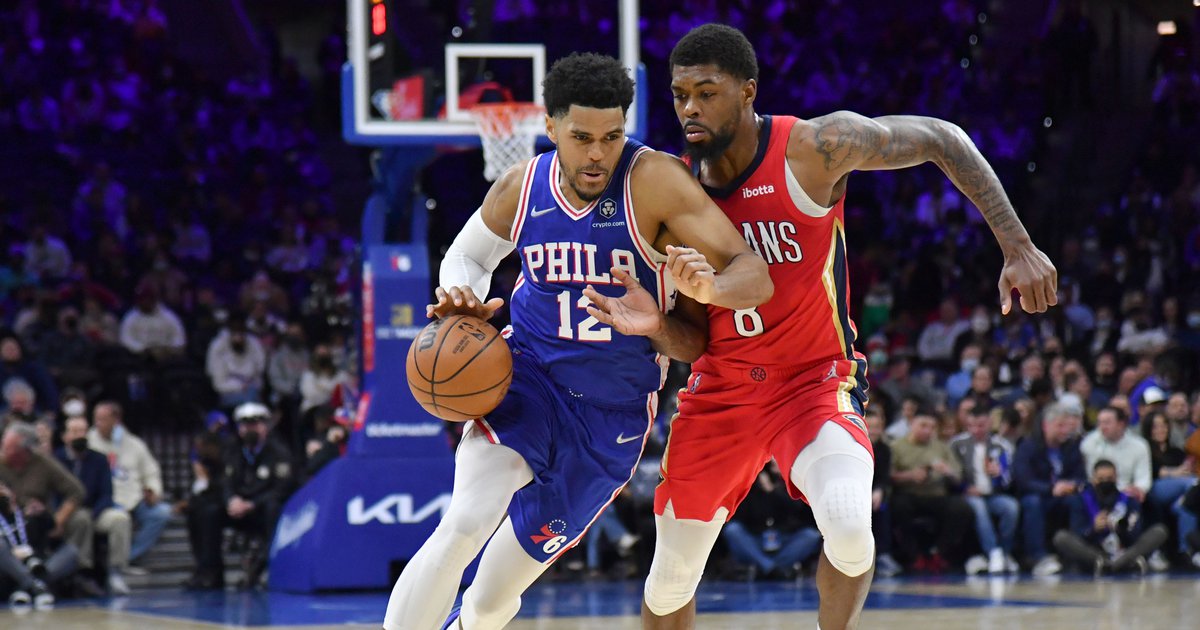 If you’ve followed the Sixers at all over the past few years, chances are you’ve developed a strong opinion on Tobias Harris one way or another. Within their constantly changing roster, Harris has looked like an All-Star at his best and unplayable at his worst, mostly settling into a “useful, but paid too much” spot in the team’s hierarchy.

The contract can’t be changed at this point. But Harris’ 2022-23 campaign will reflect a lot about the team around him.

Harris’ ability to win back supporters in Philadelphia appeared to be on the ropes last season, a slow start coming off of the heels of a disappointing Game 7 performance vs. Atlanta. After flirting with an All-Star bid a year prior, Harris’ numbers were down or flat across the board despite him having a bigger opportunity with Ben Simmons in exile.

That backdrop made his stretch run all the more impressive. It was Harris who ended up stepping up and taking a lot of the toughest defensive assignments, doing so credibly in many cases. It was Harris whose three-point efficiency and volume both went up following the All-Star break, and though the Sixers would benefit from a more dramatic increase in the latter, he was moving in the direction they needed him to.

Harris’ willingness to embrace the role and the moment may have dented his counting stats on offense, but it led to a version of Harris that can be quite valuable to this team, even if it falls short of his salary number. It’s what has made him such a tricky player to discuss in theoretical trades — he does enough things that he would be hard to replace, but isn’t valuable enough as a standalone player to bring Philadelphia a slam-dunk return in said deals.

By his own admission, Harris has only just begun to really focus on being a spot-up threat. Assuming he didn’t spend his entire summer planning his recent wedding, there was more than enough time for Harris to get in a mountain of reps there. Harris getting to the point where releasing an open three is automatic would be the most important development that could happen for him on this roster. If it isn’t, the quick decision-making Doc Rivers has harped on for years has to be there. Stalling out a possession and looking off a shot, a pass, or a driving lane can’t happen if the Sixers are going to be the best version of themselves.

The defensive part of the equation is going to be more important than ever for Harris, and that’s where his close to the 2021-22 season lends the most hope.

The idea of Harris being your No. 1 stopper is dicey based on his track record, but the problem last year is that the Sixers constantly had to make sacrifices on one end of the floor or another in order to make lineups work. That’s not necessarily the case now. P.J. Tucker can defend the league’s toughest perimeter matchups and knock down corner threes consistently. De’Anthony Melton provides cover against a lot of matchups 1-3 and a combination of shot creation and outside shooting. Danuel House Jr. is basically a classic three-and-D player. Having guys like that throughout the rotation makes it so that Harris should end up in the Goldilocks zone, asked to do just the right amount of things.

Do you want Harris as your core offensive option on any unit? Probably not. But you’re happy to have him as one of a group of players who can spread the floor and attack off of the dribble. Do you want him chasing guys like Kevin Durant, Jayson Tatum, and so on around all night? No, but he is versatile enough to offer credible defense on switches and do a sturdy job on less urgent assignments. And he can be a port in a storm when you need it, a guy who can bail an offense out of some tough possessions with tough shotmaking (even if said tough possessions are sometimes his fault).

There are much worse things Harris could be than a steady presence on and off the court, someone whose teammates know they can depend on to say and do what is required. Entering his 30s, Harris has both the talent to help good teams and the experience to understand doing so will require frequent, even daily adjustments on his part. He has an opportunity to impact winning while being paid handsomely, and that’s not something to take for granted.

Perhaps that end to the season was an aberration for Harris, no more reflective of his strengths and weaknesses than any other small sample. He has a long track record across 10 years and five franchises that suggests we mostly know who he is and what he does: score 15-20 points a night within his offensive comfort zone. And I don’t mean that as an insult. There are countless current, former, and future players who would kill to even have the chance to score consistently at this level, let alone have the talent to do so.

But it’s often hard to escape the feeling of square peg, round hole with Harris. It’s why so many fans have floated trades returning multiple role players for Harris, some of them insulting to his value but understanding of the idea that production doesn’t happen in a vacuum. He can do a job, even several, it’s just a question of whether it would be better to spread that money across multiple players who can do different jobs better than he can.

For example, Harris is an above-average shooter, but only just so, and his lack of comfort in a high-volume role from deep is tough to look past. He’s also not an especially versatile shooter, a player you mostly want to ask to hit standstill threes and the occasional shot off-the-dribble. The pull-up shooting has diminished value in this context, too, with Harden and Maxey dominating perimeter touches and interior offense running through Embiid. You’re not going to use Harris as a movement shooter too often, and Harris flying off of screens likely won’t cause opposing teams to scramble too hard.

When called upon, Harris ultimately bought into what he had to do last season, and he has been a source of calm during a turbulent Sixers era. But how long is he willing to be just a side character here, and how does that show up on the floor during games? Being a high-volume shooter requires a next-shot mentality even during cold stretches, something former Sixer Danny Green has in spades. Harris has worked his way out of funks and cold streaks his way for the entirety of his basketball career, and it’s not as simple as just deciding you’re going to break those habits one day.

There have been small rumblings this offseason suggesting Harris desires to have more on-ball responsibility than he did down the stretch last season. Frankly, that doesn’t seem realistic here, with Maxey ascending and Harden running the offense whenever he’s on the floor. If you end up losing the buy-in of one of your steady guys in the locker room, you have to start worrying more about the volatility of the group. With Harden in a contract year and Embiid always liable to say what he thinks (for better or worse), this project is a bit more fragile than it looks on first glance.

All of this, mind you, probably plays second fiddle to the defensive concerns. As of right now, it appears the plan is to play a healthy chunk of minutes with PJ Tucker and Harris manning the three and four spots. As many people have noted this summer, Harris being close to a full-time three went poorly for the Sixers last time, admittedly in a much different team context than what they have now.

My concern with an Embiid/Tucker/Harris/Maxey/Harden lineup is that I don’t know how they defend quicker players at the 1-4 spots. Harris’ best defensive outings last year came when he spent time switched onto bigger players, a la Karl-Anthony Towns, or guys he could use his strength against and bait into tough midrange shots, a la Pascal Siakam. Players who can target his lack of lateral quickness and keep him honest at all three levels are a different matter entirely. And while Tucker can take a lot of top wing assignments out of his hands, you don’t want him chasing around agile guards and smaller wings either. That means the task will often be left to one of Harden or Maxey, and I don’t feel good about either option.

Here’s a question you also have to ask yourself — is Harris a good enough shooter that teams are going to rush to close out on him when it really counts, or will they live with him taking open-ish shots if it means getting the ball out of the hands of their more dangerous options? It may depend on the game and his performance across this season, I’d venture a guess he’ll end up with a look at the hoop in a lot of big spots. And again, we come back to the comfort and role factor. When guys are called upon in high-leverage moments, you want them to feel good and confident about what they’re asked to do. It’s not clear whether that will be the case for Harris with this group.

So Harris’ worst case isn’t some far-fetched scenario, it’s just him being stuck in the no man’s land he has found himself in a bunch during his time in Philadelphia. He’s one of the guys who has to help tie this project together, so getting him situated is key.