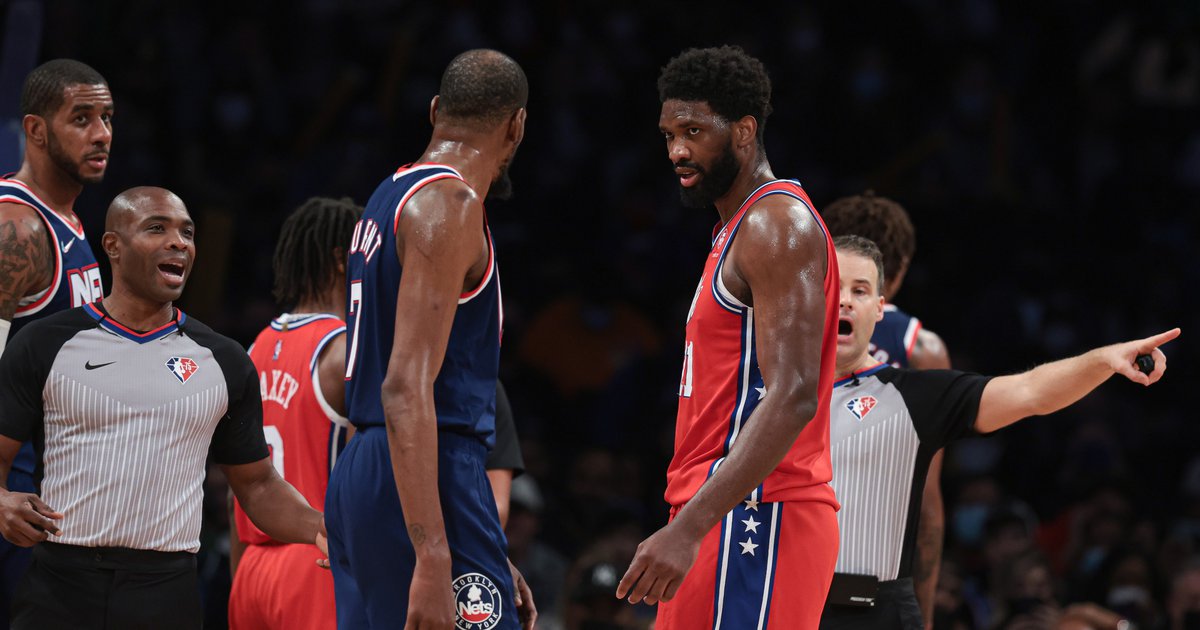 As the Kevin Durant sweepstakes drags on deeper into the summer, more and more teams will be pulled into the vortex to try to increase the offers from the real contenders. Is that the reason the Sixers emerged in a rumor on Wednesday, or are they a real threat to steal one of the best players of all-time?

According to SNY’s Ian Begley, there’s reason to believe they could get in the mix:

As of earlier this week, there were high-ranking members of the Sixers who’ve felt strongly about engaging with Brooklyn on a Durant trade.

It is unknown if Brooklyn and Philadelphia have made any recent progress on a trade.

Previous reports stated that the Suns were at or near the top of the list of teams Durant would like to be traded to. An offseason trade to Phoenix seems unlikely due to the DeAndre Ayton signing. So what happens now? Well, it’s worth noting that, in addition to Boston, Durant also sees Philadelphia as another desired landing spot, per people familiar with the matter. (SNY)

That last bit is really the only thing really worth scrutinizing. The Sixers wanting to employ one of the league’s most effortless scorers, provided they can acquire him, is not a shocker. Durant including the Sixers among a group of teams he’d be happy going to is another matter entirely, and is really the only thing that could give Philadelphia a chance to acquire him.

To be clear, Durant is one of the single greatest players to ever touch a basketball. Under contract into his late 30s, you could conceivably acquire one of the game’s all-time great scorers with plenty of points left to drop on opposing defenders. He is borderline unguardable most of the time, his length so preposterous that teams can only get near his airspace as he rises up to can jumpers. And as the years have gone on, he has gotten better and better at harnessing the value of his scoring/shooting ability from all over the floor and using it to impact the game all over the floor. He was a terrific, versatile defender for the Warriors at their zenith, averaged more assists last season than in any year of his career, and he is insanely efficient by normal standards and based on the attention teams shade his way.

Philadelphia’s problem is exactly that — he is so valuable and the market is so inflated that it feels impossible to acquire him for most teams, let alone an asset-strapped team like the Sixers.

In the process of putting together what they have, the Sixers have relinquished control of their first-round picks for quite a while. The Sixers do not have control of their 2023, 2025, or 2027 first-round picks, and as a result of the Stepien Rule, the Sixers cannot trade their 2024, 2026, and 2028 first-round picks, at least for the time being. That puts them at an asset deficit against basically anyone else who would hope to compete for Durant’s services, at least if you think future picks are the priority in such a deal.

There have been reports suggesting that might not be Brooklyn’s top desire, and that’s where the Sixers might be able to edge into the conversation. Their case to butt in rests on one player’s shoulders: Tyrese Maxey. Viewed as borderline untouchable by the organization, Maxey is viewed as one of Philadelphia’s core players moving forward and not even under consideration for a move in the vast majority of scenarios. But this is the sort of unique scenario that warrants that consideration, an opportunity that would land you one of the best possible win-now pieces you could get your hands on as an organization. Through a combination of his age, production, work ethic, production, and current contract, Maxey is one of the most valuable trade chips in the league at present. He is not a perfect player or prospect, certainly, but he is a big chip to put on the table if you were inclined to do so.

Is he a superior offering than say, Jaylen Brown if the Celtics put everything on the table to try to get Durant? Probably not. But even if we were to argue Maxey was comparable because of the youth on his side and the superior (read: cheaper) contract he’s on at the moment, we end up back in the place where the extra stuff matters.

The unique thing about Maxey being a trade centerpiece is that he’s on such a cheap deal that it requires sending Tobias Harris as part of the deal in order to get a big-time player. We’ve discussed the possibility of moving Harris quite a bit this offseason, and one scenario where he does bring potential value to a team is one where they’re trying to retool rather than rebuild. Why the Nets would retool and essentially build a version of the 2020-21 Sixers without Joel Embiid is beyond my comprehension, but he’s a solid player and a great character guy if you want to try to find reasons the Nets would go that route. Maybe after dealing with the headaches of their mercurial stars, they’re more inclined to build around guys who buy-in and help them build.

Throw in a guy like Matisse Thybulle, who has worn out a lot of fans in this city but who still has tremendous defensive value and a potential path (admittedly a rocky path) to being a two-way guy, and it’s not a laughable offer to make. It’s just not going to stack up to teams who can/will offer a Maxey-level player/prospect on top of superior pick offerings and various add-ons.

The only way that changes is if Durant ultimately makes it clear that Philly is the only place he’ll go, robbing the Nets of some leverage. Though there would be some concerns about the relationship between Durant and Harden after some barbs exchanged right after Harden left Brooklyn, the two were ultimately on good enough terms to spend time together at a Travis Scott concert recently, to say nothing of the long-term relationship they have after coming up together in Oklahoma City. I do think you’d need to pause and think about this for a moment — Durant has gone to the mat for Kyrie Irving, while Harden was clearly worn down by the lack of day-in, day-out commitment from their teammate last year. But if you believe those two can let the past be the past, why wouldn’t you consider it?

I’ll continue to be the guy who rains on everybody’s parade on this subject, but I’ll say this — this is the first time I think there has been any reporting that provides a glimmer of hope that they could get something done. It would require the stars to align in a manner I wouldn’t personally bet on, but stranger things have happened.